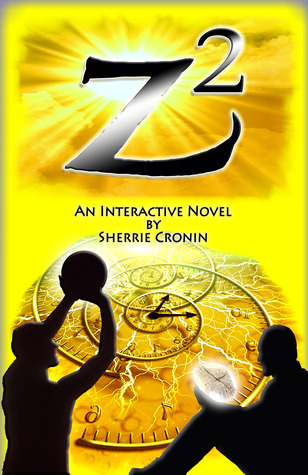 Alex once walked away from a rare ability to warp time, thinking it was only a young man's trick to play basketball better. Now, as a father and teacher, he needs to relearn the skill quickly before the past begins to destroy his own future. To protect his daughter and his most promising student, he must stop the school at which he teaches from turning the clock backwards to an era of white supremacy.

An old high school friend is in desperate need of Alex’s unique gifts to help solve an ancient Maya mystery. As the puzzling artifact offers a rare chance to bridge the past and the future, its story begins to intertwine with the growing tensions at Alex’s school. As both situations take dangerous turns, Alex knows that he must learn to control his temporal talents before he runs out of time.

z2 is part of 46. Ascending, a collection of loosely interrelated novels about five very different family members who each discover that they can do the extraordinary when circumstances require it. These books are designed to be read as stand alone stories or in any order.

I must ask: what is the significance of the titles of the Ascending Series?
I’m married to a math teacher and work as a geophysicist, so these are titles that grew out of a love of math. I wanted to name my first book “One” but as you might guess this is a title that has been used often. So I decided to get a little more creative and use x raised to the power of zero (written x0) because it is a mathematical expression for the number one. Because the book x0 celebrates the ways we are alike, and the second book celebrates the ways that we are different, I went with y raised to the power of one (written y1) for my second title because y1 is always itself.

Once I got started, I just kept going. My third book, z2, is about time and cause and effect and the outcomes from our decisions and z2 fits. My fourth novel uses the concept light radiating out from a point, which is described by the title c3 perfectly. The fifth and six novels will have similar names.

I know this is a geeky approach, but to be honest, my books are geeky, speculative fiction books. My biggest problem is that superscripts are hard to do in so many places. I can’t get them on my own blog (where my books consistently show up as x0, y1, z2 and c3) or at Amazon or Goodreads, where they show up the same.

And also I must ask what means an “interactive novel”?
All the electronic versions of my books (those from Amazon, Nook, Apple, Smashwords and others) contain a few blue underlined links in each chapter that will take reader to blogs, websites and news articles that provide photographs and information that could enhance enjoyment of the novel. Each book also contains nine links to songs that are enjoyed by the main characters in the story. Readers who don’t like this idea, or who are reading the book on a device that does not support hypertext, can go to the links later for more flavor after the book is finished if they want. They can also just ignore them as none of the links are necessary to enjoy the story.

The full URLs are given at the end of each book, and there are live hyperlinks at each book’s website. I do monitor the URLs periodically to ensure that they ar still live and I ask my readers to contact me if they discover that a link is broken.

How the paranormal, ancient mystery can be entwined with the SF genre to obtain a great story?
My book intertwines three stories, each told over the course of a calendar year. One of these stories takes place in 1697, during the fall of the last independent Mayan city to the Spanish. The other two stories take place today. One concerns an archeologist trying to solve a mystery left behind in 1697, and the other concerns his friend, a physics teacher who is fascinated by the nature of time. Obviously all three stories come together in a way that I hope the reader will enjoy.

How did you choose (or how the “book” chose) the characters? Anyway, having in view that the book informed you that it is in fact a series of six books, who is the boss here: you or the book? Who has the ideas and who has the last word?
Ha, now that is a good question. Writing a book is a little like having a cat for a pet. You may start the relationship and provide all the worldly needs and therefore think you are in charge, but often the cat makes you reconsider that assumption.

I’ve started each book with a loose outline and a list of characters. In every case I’ve followed the outline and yet ended up with a story that was not quite what I expected, and yet in the end it felt like the way the story was really supposed to be. And in every case, I’ve had at least one minor character who just insisted on having a bigger part. In z2 I had two of them, Kyle and Kisa, and by the end they were two of my favorites.

Is my opinion that a good book should transmit a message. What do you think about that?
I agree completely and then some. I think that all books do transmit a message, even those intended to be nothing more than the lightest of entertainment. Writing is very personal, and your heart and your beliefs go with your words and are embedded in how your characters treat others and feel about themselves. That hardly means that the world needs nothing but fluffy light stories about good people with happy endings. Meaningful and important messages often can be delivered best through a dark tale. In the end though, I think every author needs to consider that a reader has let this particular book in, and however the tale is told, the end result should be that the reader is in better shape somehow for having read the book. Sherrie Roth grew up in Western Kansas thinking that there was no place in the universe more fascinating than outer space. After her mother vetoed astronaut as a career ambition, she went on to study journalism and physics in hopes of becoming a science writer.

She published her first science fiction short story pretty easily, and then waited a lot of tables while she looked for inspiration for the next story. When it finally came, it declared to her that it had to be whole book, nothing less. One night, while digesting this disturbing piece of news, she drank way too many shots of ouzo with her boyfriend. She woke up thirty-one years later demanding to know what was going on.

The boyfriend, who she had apparently long since married, asked her to calm down and explained that in a fit of practicality she had gone back to school and gotten a degree in geophysics and had spent the last 28 years interpreting seismic data in the oil industry. The good news, according to Mr. Cronin, was that she had found it at least mildly entertaining and ridiculously well-paying The bad news was that the two of them had still managed to spend almost all of the money.

Apparently she was now Mrs. Cronin, and the further good news was that they had produced three wonderful children whom they loved dearly, even though to be honest that is where a lot of the money had gone. Even better news was that Mr. Cronin turned out to be a warm-hearted, encouraging sort who was happy to see her awake and ready to write. "It's about time," were his exact words.

Sherrie Cronin discovered that over the ensuing decades Sally Ride had already managed to become the first woman in space and apparently had done a fine job of it. No one, however, had written the book that had been in Sherrie's head for decades. The only problem was, the book informed her sternly that it had now grown into a six book series. Sherrie decided that she better start writing it before it got any longer. She's been wide awake ever since, and writing away.

book looks very good will have to read.

love the cover!! book sounds great!! thanks for the giveaway!!

This sounds like a very inspiring series! Thanks for sharing