Seductive and lethal vampire, Léopold Devereoux, returns to the Big Easy to find a killer. His search leads him to a beautiful and mysterious woman, who awakens desires and emotions that he’s long fought to keep buried. After centuries of self-imposed solitude, the billionaire philanthropist struggles to restrain his growing thirst for the intriguing, lovely female who’s captured his attention.

Deep in the heart of New Orleans, they embark on a perilous adventure, forced to search for an ancient sacrificial relic that they hope will save their lives. As they face formidable challenges, Léopold and Laryssa surrender to the passionate intimacy that possesses them. After hundreds of years of denying himself love, will Léopold bond to the woman who has begun to crack the impenetrable shell around his heart? As evil draws near, will Laryssa survive the demon that has come to take her soul?

Laryssa had heard the customer behind her, but the damn mirror wire wouldn’t seem to catch right. It kept slipping and she cursed under her breath, hoping she wouldn’t drop it. If she could just hold it up a minute longer, she could get it to hang squarely on the wall. She fingered the hook that she’d just renailed into the wall and then moved her thumb over to the thin metal string. With a final shove upward, she attempted to flick it into place. But as the wire caught, it sliced into her flesh. A sharp sting threw her off balance, and her pumps began to waver. Shit. Not again.

“Oh my God!” Laryssa squeaked as she fell backwards, fully expecting to crack her head open on one of the many sharp-edged desks that sat adjacent to where she’d been working. As she felt strong male hands slide up under her ribcage, grazing her breasts, she gasped. She wasn’t sure whether to thank the stranger or call the police, but as she turned her face to try to see him, she immediately recognized her rescuer.

“It’s you,” she stammered, clutching his arms. Laryssa giggled nervously, realizing how once again she’d foolishly fallen in front of the sexy vampire. And like last night, he’d caught her. She couldn’t believe how clumsy she’d all of a sudden become. She tried to relax and find her footing, but her heart was beating so fast that she could barely think. What is he doing here in my shop? How did he find me?

Like a story book flipping pages, her mind whirled until she remembered what she’d done last night at the club. She’d fought off the asshole who’d grabbed her at the bar. The feel of his hands around her throat had forced her fear into overdrive. The knife had only been a few inches away, but still too far. Desperation had taken over as her power surged, calling the blade to her fingertips. Jamming it into his neck was as instinctive as breathing. Kill or be killed, she’d always choose the former. She’d run into the alley, refusing to discuss it with management. The only one who knew her was Avery and there was no way her friend would have divulged her identity to the vampire. She’d be more likely to turn him into a three horned sheep before she’d squeal. The only way the vampire could have found her would have been if he’d followed her home.

A brush to her breast reminded her that she was still being held upright by him, and Laryssa felt her face grow red. Arousal licked over her skin. Cautiously, she rooted her shoes on the floor and turned around, steeling her nerves.

“My pleasure, mademoiselle, but I suggest you avoid heights in the future.”

Surreptitiously, she stole a glance at him, which reminded her how incredibly handsome he was. His short dark hair was perfectly coiffed. His white dress shirt hung casually over the waistband of his jeans. Laryssa forced herself to look away, trying not to stare at the masculine features of his face. Straight nose, square jaw and perfectly kissable lips… lips that were smooth talking and way too articulate, teasing her with every word he spoke. Beads of sweat broke out across her forehead. It felt as if someone had turned up the heat, her skin was on fire. She noticed his eyes were no longer on hers and had dropped to her chest. They lingered only a second, and then he met her gaze and smiled. She looked downward and noticed that several buttons had come undone in her fall, revealing the edges of her white lace bra. Could this day get any more embarrassing? Laryssa’s fingers shook as she buttoned her sweater.

“I’m so sorry. I just…you just…I just…” Great, first I’m a klutz and now I can’t speak. She bit her lip, paused and then took a deep breath before starting again. “Thank you for catching me.”

“Again.” Léopold watched her as she adjusted her clothes, wishing to rip the rest of the pearly buttons from their fragile seams. But he refused to let the beast within take what it wanted. No, he’d find out what the hell she was before showing her his true nature. “Yes, thank you…again.” She smoothed down her skirt, trying to pretend she hadn’t just fallen into his arms and let him feel her up in the process. Business, think business. Her pulse slowed and she willed herself to appear nonchalant.

“We met last night, remember?” he pressed. Léopold smiled and ran his hand over the colorful marquetry in rosewood that scrolled through a seventeenth century secretaire. Interesting that she could deliberately control the flow of her blood. It further piqued his concern about her species. What was she?

Laryssa’s eyes met his, widening at the confirmation that he knew exactly who she was.

“Yes, yes I do. But I’m afraid I didn’t catch your name.” Vampire. Big bad vampire. Laryssa watched intently as he fingered the furniture, trailing his thumb over the symmetrical scenes as if he was caressing a lover.

“Lovely.” Léopold flashed his eyes to hers.

“What?” Laryssa realized that he was toying with her, purposefully trying to make her nervous.

“Is there something specific I can help you with?”

“You get directly to the point?” Léopold had intended to play with her a bit, throw her off her game. Yet his little rabbit wasn’t frozen in the field like he’d anticipated. No, she rebounded nicely, and now stood confidently like a wildcat, poised to attack.

“I don’t really have time to waste. So yeah, I’d like to know why you followed me from the club. And I really want to know what you are doing in my shop.”

Léopold merely laughed and crossed the room to admire a chair and matching settee.

Laryssa walked over and placed her hand on the elegant Louis XVI chair. “Yes. How did you know? It’s a very special piece. It has the mark of Versailles Palace on it.”

“Indeed.” Léopold sat in the chair, wrapping his fingers around its arms. “Nothing but the best. Fit for a king.”

“And I suspect you’d like being a king.” She put her hands on her hips, waiting for him to respond.

“Ah, a king I never was. But I’ve dined with kings, and I can assure you that while they enjoy the extravagances of the rich, they often lose their heads. Easy come, easy go.”

“Why are you here?” Laryssa brushed her hair back, attempting to regain her composure. “Are you looking for something specific?”

“Oui, pet. But not an antique. While I do enjoy shopping, this is hardly the time.” Léopold lost the smile, allowing his eyes to pierce hers. “So I shall get to the point. What are you?”

Laryssa lost her ability to rein in her pulse and her heart began to fiercely pump hot blood through her veins. Her lips tightened, and she clenched her jaw. How dare he ask about her? What the hell did he want from her anyway? Dear God, she had enough issues with the darkness on her tail and now he was asking about her origins.

“What do you mean, ‘what am I?’ I’m the owner of this store. Does that answer your question?” Laryssa asked, her voice growing louder. “Who are you?”

“Léopold Devereoux. That’s who I am. I can be your angel or nightmare, depending on the day. So listen up. What. Are. You?” Léopold didn’t make a move. He sat completely still, anticipating her answer.

Goodreads ** Smashwords ** Amazon
About the author: 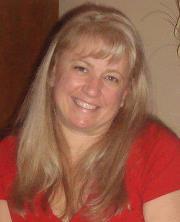 In addition to romance, Kym has written and published several articles about autism, and is passionate about autism advocacy. She writes about autism at PsychologyToday.com and AutismInRealLife.com. She also is a contributing essay author in the book Chicken Soup for the Soul: Raising Kids on the Spectrum.

Kym lives with her husband, two children, dog and cat. Her hobbies include autism advocacy, reading, tennis, zumba, traveling and spending time with her husband and children. New Orleans, with its rich culture, history and unique cuisine, is one of her favorite places to visit. Also, she loves traveling just about anywhere that has a beach or snow-covered mountains. On any given night, when not writing her own books, Kym can be found reading her Kindle, which is filled with hundreds of romances.

Awesome cover :X and giveaway :D ...thanks for the chance

Thank you so much for hosting me on my tour!!! ♥ I really appreciate the opportunity to share my new release with you and your readers!