Excerpt and Giveaway: The Trucker's Cat by Christina Thompson 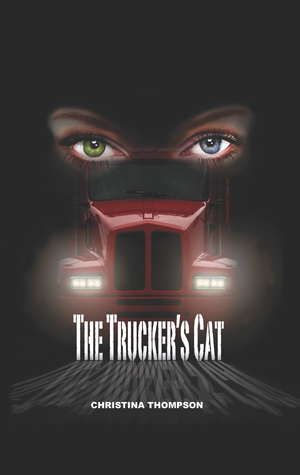 “Some men think there’s a choice between right and wrong. Great men know there is none.” ~General Steven Randall

In The Trucker’s Cat, Samantha Randall and Major Logan McCormick believe in a common value that takes on extraordinary meaning.

At the Russian Embassy where she lives with her mother and stepfather, Samantha uncovers a plot to assassinate the President. Her father’s famous speech urges her to act. She treks cross-country to warn the driver that his cargo has the proof, but she finds herself stranded in the middle of nowhere.

Driving a truck on a special military assignment, Logan sees no choice and rescues Sam from a bloated lecher. Against protocol, he gives the wildcat a ride. With Russian soldiers searching for Logan’s cargo and another team chasing Samantha, they quickly realize they must work together. Making sacrifices for the greater good, they will do what’s necessary to prevent the unthinkable.

Excerpt from The Trucker’s Cat

Freshly shaved and showered, Logan McCormick sipped his black coffee from a window booth in the truck stop diner. While his partner ranted through the communication piece in his ear, he watched a smoking Greyhound bus catch fire at the edge of the parking lot. The passengers scrambled in every direction except for a young woman in a flannel shirt and jeans. She sprayed the engine with the fire extinguisher. It surprised him that she could hold it up; it was almost as big as she was.

“Mick, are you even listening to me?” Barrett asked in his ear.

“I wish I wasn’t. You’re whining again,” he mumbled.

“I am not. It pisses me off that I can’t get a decent cell signal anywhere at this damn truck stop.”

“Who are you calling? I’m your only friend.” He smirked at the non-reply.

The group from the bus raced across the parking lot knowing they’d have a long wait. Glad he already ordered his meal; he continued to watch the young woman by the pay phone. As she walked gracefully toward the diner, her heels never touched the ground. He smiled when she paused at the lowering of the flag.

When his cell vibrated on the table, he checked the caller ID, winced, and covered it with his Texas Ranger’s baseball cap. Fascinated with the young woman, he pushed his hat aside and leaned forward to see her argue with the attendant. The man nodded apologetically while she shook her finger at him.

He sipped his coffee. As he wondered about the wildcat under the cap, the waitress stopped briefly to deliver his steak and scrambled eggs. He wolfed down his meal, and the young woman disappeared into the gas station’s convenience store. The bus passengers overwhelmed the only two waitresses. It looked like the manager corralled the busboy to carry around a pot of coffee and hand out menus. He chewed his last bite as an elderly woman with a bag of red yarn trolled the diner and eyed his spot.

“How long does it take you to eat?” Barrett asked in his ear.

He set his knife across his plate. “Can I finish my coffee, please?”

Logan held out his mug for the busboy and spotted the young woman scanning the room from the doorway. His wildcat assessment fit. Her body was sleek not awkwardly skinny. The loose curls of reddish brown hair danced around her cap as she turned her head. He couldn’t see her face but knew by her confident stance that she was a spitfire. She caught him staring and moved toward him. Damn it. He didn’t need the attention.

Pulling her cap to her brow to shadow her face, she stood beside the table with her backpack in her hand. “Hello, Major.”

Barrett thundered in his ear, “What the hell? Who is that?”

“Excuse me?” he asked tensely.

“I’m guessing you were a major in the army,” she said.

He relaxed slightly. “What makes you think that?”

“Your hair is army short, your watch is military time, your combat boots are army issue, and your posture is rigid,” she said, setting her bag on the seat across from him. She slid in next to it.

“Military maybe, but an officer?”

She shrugged. “You have a superior air about you. I guessed. Was I right?”

Barrett laughed. “She’s got you pegged.”

Resisting the urge to turn off his com, he frowned and crossed his arms stretching his denim over-shirt. When he didn’t answer, she continued, “I’m looking for a ride.”

“How do you know I’m not done for the night?”

“I think you prefer to drive at night. You’re clean and you just ate breakfast.”

Barrett snickered in his ear. “Let her. She’s amusing, and you’re such a grouch.”

“No,” he replied to her and Barrett. Two could play her game. “What are you running from?”

She stiffened slightly. “What makes you think that?”

“You have leftover hair dye on your earlobe.” She gasped and rubbed her ear. He pointed at her other. “Busted,” he said with a chuckle.

“Are you joking with a woman?” Barrett asked.

He clenched his jaw at the statement. Turning her head, she tugged her cap down farther. He thought she’d completely cover her eyes. The waitress walked by and put his bill next to him. “Honey, you want anything?”

“No, thank you,” she replied. When the waitress hurried away, the wildcat stuck her foot between his legs and pressed her canvas shoe into his crotch. God, it felt good. “If you give me a ride, I can make it worth your while.”

Barrett chuckled. “Take her up on it. How long’s it been? Two years since your divorce? Mick, don’t even think about turning me off. You know the protocol.”

Calling her bluff, he leaned back, which pressed his cock firmly against her foot. “How old are you?”

“Twenty-one,” she replied, wiggling her toes through her shoe.

He was getting hard—so much for bluffing. “Let’s see your ID.”

“Nice try, Major,” she said, glancing around the room. “I’m also guessing you have a nickname like Mac.”

Her mouth opened with some witty reply, but she snapped it shut just as quick. Before he could follow her eyes to the TV at the counter, she applied a little more pressure with her foot. God, and it wasn’t his own pressure. He needed to focus on something else. He sipped his coffee.

“How about that ride?” Her foot continued to stroke him. “I’m not a virgin if that’s what you’re wondering.”

He choked on his coffee. “Jesus,” he said, looking around.

Thankfully, nobody paid any attention to them. Before Barrett said a word, he tapped off his com. She looked up at him, and he finally saw her eyes. He stared at her freckled face with a mesmerizing green eye and cobalt blue eye.

She quickly looked away. “I know. I’m Sam the Freak.”

When she started to pull her foot away, he held it firm with his hand. “They’re exotic,” he replied, before letting her go.

She smiled. “Thank you, Major.”

Stunned, he watched her leave the diner and wondered why he’d said it. He would have liked to take her up on her offer especially after seeing her smile. It curved at the ends like the Cheshire Cat. It seemed genuine and knocked him on his ass. God, he was hard with only a foot and a smile. It has been too damn long.

Christina Thompson, a retired acupuncturist, enjoys writing about the physical science, the emotional workings of our mind and heart, and the spiritual energy that taps into our passions.

Her degree in biology from Nazareth College in Kalamazoo gave her a love of science and a background into the physical realm of the body. Her diploma in Traditional Chinese acupuncture from Midwest College of Oriental Medicine taught her that the mind and spirit affect the body in powerful ways.

She teaches at the Reflexions Plus Holistic Center on many topics including massage therapy, acupuncture, Feng Shui as well as other modalities of Chinese medicine. She currently resides with her husband, Kraig, in West Michigan.

Sounds like a great book with a lot of action and conspiracy! Love it!

Thanks for your interest. I appreciate it. Good luck in the Giveaway! :)

I'd have to say the air of mystery with a bunch of sass!

I like Samantha's spirit. I have a feeling she is going to give Logan the ride of his life...not sure about the pun ;)

The mystery surrounding the conspiracy theory :)

the cover intrigues me a lot :)

The cover and the story intrigues me so much :D

It's been a while since I've read a conspiracy book!! Sounds like a great read!

the cover, it looks really creepy so I wonder if the plot is like it too

the cover grabed me right away!! book sounds good!! and i look forawrd to reading it! thank you for the giveaway!

Conspiracy theory books are one of my guilty pleasures! And the setting in Russia reminds me of a land-based version of one of my favorite action movies of all time, "Air Force One."

I love the cover for one, so the book must be great :)

i love romantic action-adventure stories. (that's a mix of my two favorite movie genres as well.)

The cover art is what first pulled me in! It made me think of my favorite comic book villainess, Catwoman, before even reading the word 'Cat' in the title.

That's such a cool cover, I like the blend of cat and truck!

The fact that SHE is the one on a mission.

The cover intrigues me.