Review and Giveaway: Love on Loch Ness by Aubrie Dionne 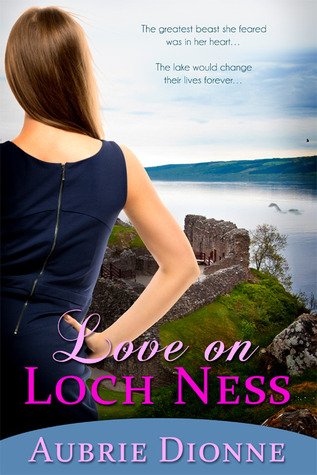 I know that it’s not proper to start with the conclusion, but ... Aubrie Dionne has clearly won a fan. I’m not the type that chooses books only by their author. In fact, there are quite a few authors whose books I would read just because are written by them. Otherwise, a word, an idea ... a cover... the mood can make me read a "new" book. But now, Aubrie Dionne is on my list of interest and I am very curious what she will bring next, especially since I'm sure she can offer much more.

However, when I started reading Love on Loch Ness I had no idea that she is the author, but the writing style reminded me of Pan's Conquest in the way that it’s a sensitive and persuasive one, that attracts you and keeps you bound to the book. If you think that this would make them "too similar", you could not be more wrong.

In Love on Loch Ness there are entwined the romance that blossom between the main characters and the "story" of discovering the Loch Ness monster. Hmm ... monster… as the story will show us, not the fantastic thing from Loch Ness is the monster, but one of our neighbors (as almost always, isn’t it?). I liked the idea of the inner struggle between what your heart and the scientist believe that you have built for yourself requires for you to think or do. I also liked the way in which the characters’ own baggage influences and motivates the position they take. Finally it comes to faith, strength and logic to believe in something you cannot prove that exists. Do you need to prove to others that what you saw with your own eyes exists, or is it enough for you to know that it’s real? How far you will go and what are you willing to risk in order to demonstrate what you already believe in?

The tension is increasing gradually as the plot changes the focus to the action. There will be mystery, there will be fantastic, unusual reactions and even terror. The suspense is present and adapted to the story. Likewise, the dose of despair will be administrated. The predictability of the denouement is somewhat mitigated, and the mystic ... unexpected (but previously "suggested" as possible) will offer you that satisfaction of which necessity was gradually inoculated. Building the game, the author "plays" fair giving to you hints throughout the pages, but also leaving room for alternative scenarios. As a bonus, the Scottish fragrance is present, brought by the male typology, the peculiarities of language and the mystery that surrounds this land.

The characters are enjoyable, some novel, and each of them represent a different type of interest regarding the old Nessie, but I leave you to discover what these are as you will find out how a belief can separate people or bring them together.

Thus it is a nice reading that I recommend to you if you want to spend an enjoyable time.

Aubrie grew up watching the original Star Wars movies over and over again until she could recite and reenact every single scene in her backyard. She also loved The Goonies, Star Trek the Next Generation-favorite character was Data by far-, and Indiana Jones. But, her all time favorite movie was The Last Unicorn. She still wonders why the unicorn decided to change back to a unicorn in the end.

Aubrie wrote in her junior high yearbook that she wanted to be "A concert flutist" when she grew up. When she made that happen, she decided one career was not enough and embarked as a fantasy, sci fi author. Two careers seems to keep her busy. For now.

Now for the professional bio:

Aubrie Dionne is an author and flutist in New England. Her writings have appeared in Mindflights, Niteblade, Silver Blade, Emerald Tales, Hazard Cat, Moon Drenched Fables, A Fly in Amber, and Aurora Wolf. Her books are published by Entangled Publishing, Lyrical Press, and Gypsy Shadow Publishing. She recently signed her YA sci fi novel with Inkspell Publishing titled: Colonization: Paradise Reclaimed, which will release in October 2012. When she's not writing, Aubrie teaches flute and plays in orchestras. She's a big Star Trek TNG fan, as well as Star Wars and Serenity.

Author's US Giveaway
a Rafflecopter giveaway
Posted by CCAM at 3:30 PM

You've convinced me! I'll be giving it a try!

Thank you so much for this wonderful review! :)

I love the cover and the idea of this book.
Two years ago I've visited Loch Ness and I have very lovely memories there. It's a special place.

The cover is so beautiful!! Thank you for the giveaway! I can't wait to read this book :)

Sounds like an amazing read!!
Thanks for the chance to win!

Love the cover! :)
Thanks for the giveaway! :D