Sophia can run but she can’t hide. RedZone is on her tail and those of the six tech-augmented soldiers who escaped its clutches with her. If she could only focus on fighting her way to safety, she might live long enough to disappear. But it’s not just her own backside she needs to watch out for.

Sophia can run but she can’t hide. RedZone is on her tail and those of the six tech-augmented soldiers who escaped its clutches with her. If she could only focus on fighting her way to safety, she might live long enough to disappear. But it’s not just her own backside she needs to watch out for.

At her side is her boyfriend, Kyle. He’s the reason she found the courage to escape, and she’ll do anything to keep him and his secrets out of RedZone’s hands. Only problem is, since she was once sent to capture him, he has good reason not to trust her.

In fact, there’s not much trust to go around. RedZone keeps finding them, suggesting someone is a traitor. And if that’s not enough to recapture the group, the organization has a backup plan. One that will force Sophia and Kyle to choose between safety and risking everything one more time.

Warning: Contains killer robots, mutant college students, and dangerous super soldiers. And those are the good guys. It’s enough to make a rogue assassin wish she were taking her philosophy final instead.

I’m a girl who likes explosions. No, really. If you want to drag me to see a movie or make me hold still long enough to sit through an entire TV episode, you’d better be able to promise me something blows up. Explosions are a bit more challenging to pull off in a book, but I’ll take a character who kicks ass and saves the world with adrenaline-fueled page-turning any day.

I’m also a girl who likes a good kissing book. Even if the book isn’t a romance (genre-wise), if there’s no romance involved, chances are I’m going to not like it as much as I might have. Whether sweet, sexy, or both, some love in a story just makes it feel more optimistic. The need for deep, if not necessarily romantic, relationships is part of human nature.

From the beginning, I knew my RedZone series needed to contain both of those elements to make me happy, but combining thrills with romance wasn’t just about satisfying my inner teenage boy or swooning feminine heart. It was because I believe that relationships—whether they be romantic or platonic—are what make a story most affecting.

Taking down the bad guy, saving the world—sure, they’re lofty and exciting goals, but they’re huge. They’re impersonal. And frankly, how many of us can relate to the idea that the fate of a nation or the entire planet is on our shoulders? Those kinds of stakes provide excitement but without the personal punch to the gut that causes us to double over in tension.

But caring for other people and subsequently fearing for what might happen to them—that’s something most of us can imagine. And that’s why I believe focusing on the relationship aspect of a story, along with the thrill-seeking side is important. Relationships keep characters, and consequently readers, grounded. They raise the stakes by making threats personal. Revive and Resist use a romance subplot to do this because, hey, I like a good kissing book. But I hope it’s also clear that the other relationships in the book—the strong friendships Sophia has—are just as important.

Writing a story that balances its thriller side with its romantic one poses a lot of challenges. Each aspect of the story needs to follow the same trajectory. Each needs to increase the tension until the story reaches its climax. But each side also needs to interact with the other and ideally play off each other, making life worse for the characters until it can make everything better. In a way, it’s a lot like writing two stories at once. In the end though, I think it makes for a more gripping book because of that. When the bad guys are trying to kill you and your heart is on the line, that’s twice the threat. And it can make for twice the explosions. 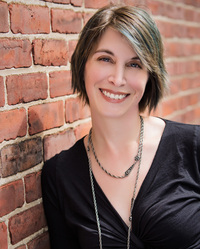 Tracey Martin grew up outside of Philadelphia, the lucky recipient of a drama-free childhood, which is why she spent so much time reading about other people’s lives. It was while she was working on her doctorate in psychology that she had an epiphany–imaginary people are way more fun than real ones. And so she began writing. Never able to choose just one of anything, she currently writes both urban fantasy for adults and contemporary stories for teens.

She likes her coffee simple, her music epic, and her movies to contain explosions. A city girl at heart, she doesn’t understand how she and her husband ended up living in New Hampshire, but writing keeps her off the mean, small town streets. You can find her online at tracey-martin.com.

I liked both the book description, and the book cover.

The book sounds very intriguing, thank you for the reveal!

Congratulations on your new release! This looks like a great book.

This book sounds like it has everything, or close enough to it.

It would be nice to read about some good friendships, or even a nice romance for a change :)

This sounds so exciting! I love the concept of this book.

I enjoyed reading the excerpt and learning about this book series. These books sound very interesting and intriguing!