too late to back out - Soulshifter by Barbara Pietron

Sixteen-year-old Jack Ironwood knew exactly what he wanted. Until he got it. Jack was content to stay unnoticed by pretty and popular track-star, Natalie Segetich, until her best friend Emma disappears. 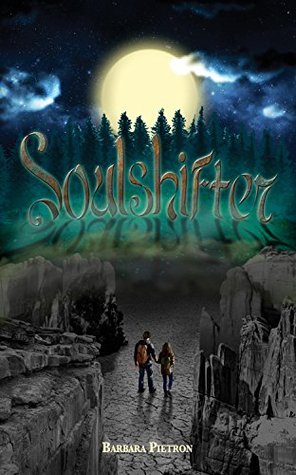 Sixteen-year-old Jack Ironwood knew exactly what he wanted. Until he got it. Jack was content to stay unnoticed by pretty and popular track-star, Natalie Segetich, until her best friend Emma disappears.

Natalie swears something took Emma, and though most people write Natalie off as traumatized and confused, Jack is a soulshifter and he knows the human-stealing Enuuki—hell's messengers—are real. As a soulshifter, Jack can cross into the underworld so he sees Emma's rescue as an opportunity to prove himself a valuable member of his transcendental sect—and a way to secure a future otherwise out of his reach. Although he needs Natalie's help to prepare for the mission, Jack intends to go to the underworld alone. But as a viable plan takes shape, it's clear the best chance of success means Natalie must accompany him.

On the eve of the quest, when Jack is promised the hand of a respected elder's daughter—a dream come true—he realizes he's no longer sure what he wants. But it's too late to back out, not with the sect and Natalie counting on him. Pursued by the dark lord's henchmen and ghastly mutant creatures, Jack and Natalie struggle to come out ahead in a battle and barter for souls.

In the end, Jack will have to decide his own fate, because nothing short of a deal with the devil will get all three of them out of hell alive.


TEASER
The smell of overripe banana wafting from the open locker on Jack's right gave him every reason to keep his face turned toward Natalie. He closed his notebook and slid it onto a shelf. "Hey… uh… I'm sorry about your friend."
"Thanks." Though her flat, bitter tone didn't invite further dialogue, Jack knew time was short. If he was right about what he'd seen on his spirit-walk, a life depended on this conversation.
The din died down as the hallway cleared. The locker on his right banged shut and Jack breathed a small sigh of relief—for the smell, and for the privacy. He tried again, getting straight to the point. "Uh… look, I believe you… what you saw, I mean. The thing that took your friend wasn't human."
That actually earned him a quick glance. "Yeah, right."
"Seriously, I—"
She cut him off with a sudden look directly into his eyes. "No one believes me." The raw despair in her voice dropped like a weight on his chest. She turned away and continued cramming books into her backpack.
"I—" Jack scrambled for something he could say to make her listen.
Natalie hefted her backpack onto one shoulder and pressed her locker closed. She paused, one hand resting on the locker, eyes downcast. "Look, I don't mean to be rude, but I don't want to talk about it," she said in a low monotone, then turned and headed for the exit.
Jack gave his locker door a shove and took off after her, fumbling for the right thing to say. His long legs quickly closed the distance between them. "Natalie, wait. Please. I've seen it too."
Her lips pressed into a straight line while her eyes remained fixed on the doors in front of her. Jack lowered his voice as they passed a cluster of students. "It's hairy, right? Pointy nose like a fox. Walks upright. Has a tail."
Natalie slowed her pace a bit and studied him without turning her head. A brief glimpse of the terror she kept carefully hidden escaped from her nonchalant façade.

After years in the corporate world, Barbara found herself with a second chance to decide what she wanted to be when she grew up. Her lifetime love of books and the written word returned one answer: writer. Drawing from her experience with technical writing, she began by writing non-fiction magazine pieces and achieved both regional and national publication. Her success encouraged her to complete a novel. She learned much from her first manuscript, critiques, books, contests, and blogs. In 2012, her novel Thunderstone, was a quarterfinalist in the Amazon Breakthrough Novel Award contest and won a critique by Publisher's Weekly. A few months later, she was offered publication by Scribe Publishing Company.

Barbara has a few other novels in the works, including a Thunderstone sequel. If she's not reading or writing, Barbara likes to walk, garden, and sew. She works in a library and lives in Royal Oak, Michigan with her husband, daughter, and their cat – who often acts like a dog.