Sam is a typical twelve-year-old boy who works on his parent’s farm, but is not as interested in horses as his horse-training family. However, he does his best to help out until an incident when he is riding with his mother. After saving her from becoming nearly trampled, his viewpoint changes … until a strange horse comes to their farm with quirks, earning him the name Dog. 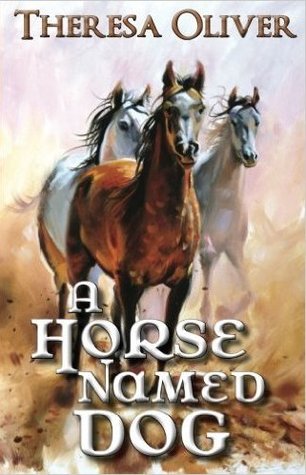 Sam is a typical twelve-year-old boy who works on his parent’s farm, but is not as interested in horses as his horse-training family. However, he does his best to help out until an incident when he is riding with his mother. After saving her from becoming nearly trampled, his viewpoint changes … until a strange horse comes to their farm with quirks, earning him the name Dog.

Dog likes Sam right away, but Sam wants nothing to do with him, as he is the son of Trumpeter, the horse that nearly maimed his mother for life. Sam has a hard time dealing with not only the memory of the accident, but the extra chores and responsibilities suddenly thrust upon him, one of which is training Dog.

Because his mother is out of work and people are canceling orders, money is scarce. With the Indiana Classic coming up—a local horse race with a huge purse—will Sam be able to befriend Dog and save their farm, or will Dog go back to his present owner, never to be seen again?

They walked along at a leisurely pace for a bit when, suddenly, Trumpeter reared up, then came down hard into a bolt. Sasha quickly reined him in, standing in the stirrups as she pulled him back and brought him down to an easy walk. “Whoa, boy! No racing today. We’re just going for a walk. Take it easy,” Sasha said, patting Trumpeter on the side of his neck, but he abruptly pulled away.

“He’s in a mood,” Sam commented sarcastically, reaching down to pat Angel. She nodded her head.

“Yeah, pull back a bit, Sam, just in case,” Sam’s mother said. “Angel might be spooking him.” Another horse walking so close beside Trumpeter could be triggering his nature to race.

Sam laughed. “Anything spooks him, Mom. He wants to run. We’d better go back and get Dad.”

His mother shook her head. “No, he’ll be fine. The fresh air will do him some good.” A second later, Trumpeter tried to bolt again, but Sasha was quick to pull back on the reins, bringing him easily back under control. “On second thought, maybe a quick run will do him some good. Hold tight to Angel. I’ll see you in the practice field.”

“Okay,” Sam replied uneasily. His mother had taken Trumpeter for a run upon many occasions, but it seemed different this time somehow, and he didn’t like it. But he did as his mother asked and held tightly to Angel’s reins, bringing her to a stop.

Suddenly, his mother leaned forward slightly in the saddle, holding tightly to the reins and yelled, “Yah!”

Within a second, Trumpeter’s front hooves raised high into the air as he lunged forward, landing about six feet ahead, as he sprinted into a dead run with his tail flying wildly in the breeze straight out behind him. He stretched his long neck forward as the wind blew through his mane.

It was really a beautiful sight, watching Trumpeter run—as if watching poetry in motion. His muscles flexed, undulating at an incredible speed as he leaned forward. Trumpeter was a horse that was born to run. Within a second, they were already in the practice field ahead in the distance. Showing off a bit, Sasha turned Trumpeter quickly around and waved at Sam.

Sam laughed and made a clicking sound with his tongue, giving Angel the signal to trot, and she happily obeyed.

Then, in the distance, Trumpeter suddenly reared up, taking Sasha off guard. She fell backward off the horse, landing with a hard thud upon the ground as Sam watched in horror. Trumpeter came down hard onto his mother’s leg, crushing it. As he dug in to bolt again, he knocked her back hard onto the ground and her head banged into the hard ground, jolting her.

“Mom!” Sam yelled. “Yah!” he yelled and leaned forward, urging Angel into a full run toward his mother, lying lifeless on the ground as Trumpeter ran off into the woods. With Angel running at full speed, he was at his mother’s side in seconds. “Mom, are you okay?”

“Sam, honey, go get Dad,” his mother said calmly, but when Sam looked down at her leg, it was lying at an unnatural angle to the side. A bone was protruding from her leg and blood was quickly pooling onto her faded blue jeans and she was losing consciousness from the pain.

“Mom, I’m not leaving you!” Sam replied, sliding his arm under her shoulders. He looked up, and Trumpeter was bearing down, barreling right toward them as tufts of earth kicked up from the ground behind him with a wild look in his eyes. Angel stood still, looking around nervously, then back down to Sasha and Sam. “Mom, I have to move you.”

“Honey, I can’t.” Sasha bit her lower lip, trying to hold back the pain. The pool of blood on her jeans was now spreading down her leg.

“Mom, he’s coming back,” Sam said into her ear, trying to think quickly. He looked up, and Trumpeter was leaning forward, sprinting toward them at full speed with bloodlust in his eyes.

Goodreads ** Amazon ** Barnes&Noble
About the author:
Theresa Oliver grew up in southern Indiana, across from Louisville, Kentucky, in Clarksville, Indiana. In her childhood, she fell in love with the power of the written word, a love affair that has continued her whole life. She moved to Florida, where she has lived much of her adult life. She attended the University of Tennessee at Martin, Martin, Tenn., and earned her Bachelor of Arts in Communications degree, News Editorial sequence. She also earned a Master of Arts in Teaching degree, Early Childhood Education sequence, from Armstrong Atlantic State University, Savannah, Ga. She is currently a writer, a full-time teacher, and the owner of Write More Publications and TNT Author Services. However, her greatest adventure is as a mother of three beautiful boys. Oliver currently resides in Kissimmee, Florida, with her husband and children.

A Horse named Dog sounds like a great story. Thank you ♡

What a great title! I was raised around horses growing up, so I love horse stories.

LOVE the cover of this book!

This looks like a book I could get into.

Are the sins of the mother visited on the foal? Let's hope not!

The author has quite an impressive resume. I wish her much success.

I enjoyed reading the excerpt and learning about this book. This book sounds like a very interesting read! Looking forward to checking out this book!

Love the title of the book!

What an amazing read this book seems to be!!

I love the name of this book!

The cover makes me smile.It sounds so awesome!

I like the cover and excerpt of the book. I hope that it is a big success!

I love the premise! This looks so promising. Can't wait to read!

Thanks, everyone! Can't wait to hear what you think about my book! Thank you, Mythical Books, for the feature! :-)