I'm Maurin Kincaide, a psychometric, and until a few days ago I was working for Salem's Preternatural Task Force as an interrogator.
Now, I'm the Special Liaison for the Council, the governing body of the Others, and I take my orders from witches, werewolves and vampires 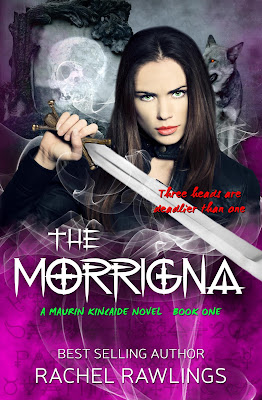 I'm Maurin Kincaide, a psychometric, and until a few days ago I was working for Salem's Preternatural Task Force as an interrogator. I cracked more cold cases and got more confessions than anyone else in the department. Of course that was before I traded in my badge for an ancient Celtic sword. Now, I'm the Special Liaison for the Council, the governing body of the Others, and I take my orders from witches, werewolves and vampires.

I didn't just make a career change though. I'm not the same person I was before. I'm stronger, I can heal from wounds that would kill a normal person. I'm developing latent psychic skills at a breakneck speed. Oh yeah, and it would seem that a Pagan goddess has taken permanent residence in my body and mind. Crazy thing is, I'm starting to feel normal, like this is who I'm supposed to be.

Of course, there are those who don't agree. Morrigan and her sisters for example. Actually, I'm pretty sure they'd like nothing more than to see me dead. And if I can't stop them and the demons they've raised, they just might get their wish.

#2 Maurin Kincaide is back in this action packed follow up novel to The Morrigna. No longer a member of Salem's Preternatural Task Force Maurin is the new liaison for The Council, governing body of Others. During what should have been a routine meeting with her former Captain, Maurin is brought in on a murder investigation.

Three dead witches, three cryptic clues, no sign of the killers and the Salem coven is losing allies within the Council. If Maurin and her unlikely partner Captain Matthison can't stop the killers, the Witch City might be without its namesake.

#3 Given the choice between her sister's wedding and witnessing the challenge for Alpha of the Salem pack, Maurin knows exactly where she'd rather be. Smack dead center in a pack of snarling werewolves wearing eau de filet mignon.

Until McKayla takes off the morning of her wedding. Being her sister's keeper will not excuse her from her job as the Council Liaison. Torn between obligations to a family she's avoided for almost a decade and the Council of Others, Maurin has less than twenty-four hours to set things right.
Show more
Show less

#4 A serial killer in Salem? Not for decades, but the bodies are piling up and all signs point in one direction. Rogue vampire. Except things aren't always what they seem, especially in a murder investigation.

With her current relationship on the rocks, her father playing match-maker and her neighbor tossing his hat in the ring, the body count isn't the only thing on the rise. Maurin is neck deep in magic, mayhem and murder.

Can she catch the killer before the killer catches her? One things for certain, when hunting vampires there will be blood.

#4.5 What do you do when you're out voted on hosting a holiday party, complete with gift exchange and all the trimmings? Tie on the apron and deck those halls. Self proclaimed Scrooge, Maurin Kincaide accepts the challenge and tackles the yuletide with all the determination she would a Council task. But not everyone is brimming with holiday cheer. A blood coven threatens to bring the holiday festivities to an end. Can Maurin stop the dark magic before the clock strikes twelve, signaling the solstice?

#5 Some things are destined to end in death. After the first attempt on her life Maurin wasn’t scared. Hell, she was almost flattered. But someone put a price on her head and things are getting complicated. Trouble is brewing in the fae courts and it’s spilling over into Salem. The UnSeelie Dark Guard have answered the call for her head on a platter and people closest to her are disappearing.

Can Maurin master court politics and find her missing men before someone claims the bounty on her head?

I love this topic! For me it’s kick ass all the way! I’m a change my own oil, change my tires kind of girl. I married a renaissance man and took every opportunity to learn how to do things for myself whenever I could. Accept for cooking- that never seemed to take with me. I can manage a few things but if we want to eat and eat well my husband is definitely the one in the kitchen.

I think that attitude of wanting to know how to do things myself and be independent transcends into my characters and the characters I love to read. Maurin definitely gets by with a little help from her friends- but don’t we all? She’s certainly been rescued from a captive situation but Maurin definitely puts her big girl panties on every day and deals with it. I think there’s a little bit of that type of woman in all of us. Whether it’s at work or at home we are in one way or another leading the charge, doing the things that need to get done from packing lunches to turning wrenches. Long before Rosie the Riveter we were busy making the world go round in one form or another.

One of my favorite heroines is Patricia Briggs Mercedes Thompson. I immediately fell in love with her headstrong attitude and grease monkey life style. Because girls can be gear heads too. And those are the characters I love to read about, the ones who are getting things done, with a little sarcasm and spunk.

Perhaps in a story where a guy is the lead, your typical alpha male, it makes sense for a woman to be in distress; to need rescuing from the villain or a life catastrophe. And just like we all have that independent streak, the can do spirit that gets us from one day to the next, there’s probably a part that’s fantasizes about being swept off our feet by the rugged alpha male who rushes in to save the day. For me, someone who doesn’t care about roses and cards, who thinks real romance is found in the little things you do for each other every day by being a present partner in life, I gravitate to stories with a strong female lead. Sure, there are times where she may be riddled with bullets and performing insurmountable feats that seem completely unrealistic- because we were told boys are tougher than girls. But when I get up after a book hangover, juggling writing a new book, editing something I’ve finished, getting the kids ready for school, getting myself ready for the day job, stealing a few moments with the husband and anything else life decides to throw my way, it doesn’t seem all that impossible after all. Metaphorical? Yes. Impossible? No.

Rachel Rawlings was born and raised in the Baltimore Metropolitan area. Her family, originally from Rhode Island, spent summers in New England sparking her fascination with Salem, MA. She has been writing fictional stories and poems since middle school, but it wasn't until 2009 that she found the inspiration to create her heroine Maurin Kincaide and complete her first full length novel, The Morrigna.

When she isn't writing, Rachel can often be found with her nose buried in a good book. An avid reader of Paranormal/Urban Fantasy, Horror and Steampunk herself, Rachel founded Hallowread- an interactive convention for both authors and fans of those genres.

More information on Hallowread, its schedule of events and participating authors can be found at Hallowread and Hallowread'

She still lives in Maryland with her husband and three children.

This series looks really good, I'm definitely going to check it out!