You may have heard of her before...- The Reaper's Daughter by K.M. Randall

Whether I'm soaring through the air as a flyer for Specter University's cheer squad, or speeding down the steepest mountain with only grace and balance keeping me from an icy end, I've always needed to feel a rush. 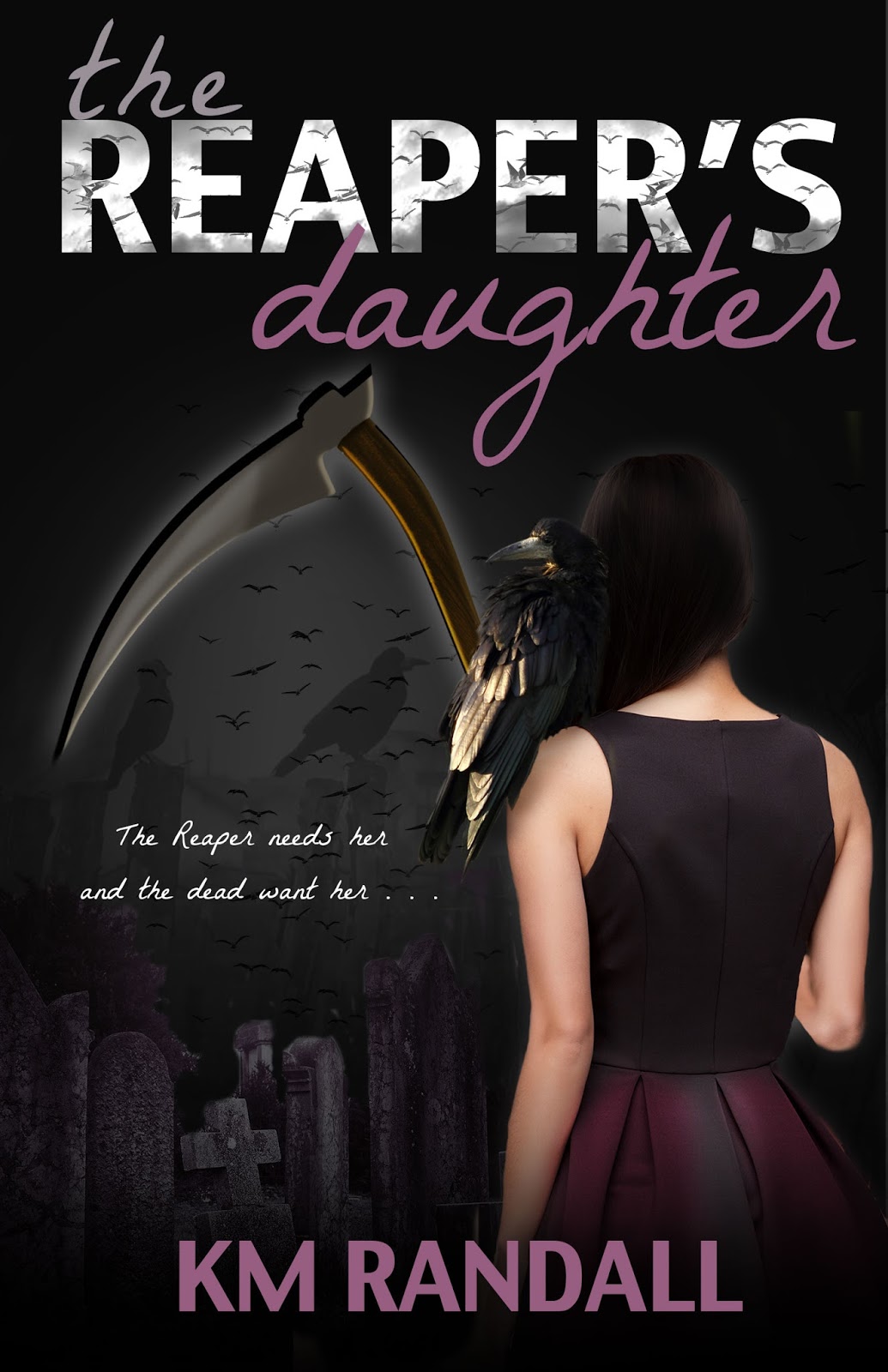 I've always felt like an average girl ... except for my strange relationship with death. You could say I like to court it. Whether I'm soaring through the air as a flyer for Specter University's cheer squad, or speeding down the steepest mountain with only grace and balance keeping me from an icy end, I've always needed to feel a rush. But now Death is courting me―in more ways than one. First, there's Rishi, a rogue death deity who has a penchant for annoying me nearly to my grave and whose intense gaze has the power to see right through me. Then there's Hades, who I'd rather had stayed just a myth. Now that he knows I exist, he's not going to leave me alone until I meet the same end as my mother.

Oh yeah, did I forget to mention her? I spent my whole life thinking she had died when I was a baby, but now I've found out she's much more than dead. Fifty years ago, Hades banished my mother from the underworld and took away her ability to cross over souls―souls that have wandered lost through the world ever since. Now she wants me to clean up the mess.

You may have heard of her before...
They call her the Grim Reaper.

I wouldn’t consider myself a connoisseur of reaper stories, but I have read a few. My first was probably Mort by Terry Pratchett, which I read a long, long time ago. Pratchett’s take, while still refreshing and humorous, doesn’t necessarily reflect the “modern” reaper, but there’s a sense of humanity that threads through that book that is now in many others. So here’s my take, based on what I’ve read more recently.

What I know is today’s reapers are often females, whose lives suddenly come to a halt when they’re called to aid Death or become reapers themselves. In Western culture, Death is often depicted as a man. But today, I believe many authors, females particularly, have begun to remake that image into young women. These are women who are full of compassion, sometimes selfish, who don’t necessarily want the gig of crossing over the dead. But they do it anyway, becoming more selfless as time wears on because most often it’s the right thing to do. There’s a moral code usually involved: when Death knocks, there’s no changing fate.

In The Reaper’s Daughter, the Grim Reaper is the main protagonist’s mother. The character, who has forever been depicted as a skeletal man, has now become a woman. The feminine reaper plays a large role in this story, and Santa Muerte, a popular Mexican death deity who is worshipped in feminine form, is the Grim Reaper’s sister in my twist.

Modern reapers aren’t just ghastly visitors, they’re complex characters—ones who have hopes, dreams, and love interests. Death is truly common because it happens to everyone, no matter a person’s status in life. The modern reaper reflects this by not just putting on a human face, but by truly being human in a deep and honest way.

THE ROLLING GREEN of her eyes was dimming fast, losing color and life to the quick click of time that beat out her days and nights, a perpetual circle that was now fading to a close. Light brown hair that had been recently styled into looping curls was limp against the black pillowcase―a metaphor for her wilted spirit, I mused, thinking offhandedly how proud my English professor would be at my thoughtful use of language.

I sighed. I didn’t want to be here.

When her eyes met mine, I knew she saw me for who I really was—what I really was. She reached out an eager hand to take mine. I didn’t want anything to do with it. But it wasn’t because her fingers were slick with blood, deep crimson dripping down her arm and fingernails from where she’d so precisely placed a razor blade to her vein and dug deep, thinking she’d be free of her pain. It was because her face reflected back to me all the times I’d felt I’d been given a shitty deal. Current situation: case in point.

“Hi,” she whispered, her once pink lips fading with every pump of her life, which was idly dripping away from her to the plush white carpet below. I could smell the newness of it, the fresh aroma of a recently laid floor. That’s going to be a bitch to get clean.

I looked around her bedroom, at the dance trophies and pictures of smiling friends, and wondered why. Why me? “Blake …” Hearing my mother's warning tone, I looked over at her where she stood in the shadows, overseeing my tutelage.

“Why can’t we just call an ambulance? It’s not too late. They could save her,” I whispered fiercely, staring at the girl’s hand stretched out to me as if I were her savior and not her end. “We should save—”

“It’s not for us to decide, you know that. We are only here to bring souls over, not save their mortal lives. Take her, she wants to go.”

“And will she still feel the same when she’s looking down at her body?” I asked, not even bothering to check my mother’s expression when she didn’t answer. Suicide wasn’t a peaceful death. It was pain―that much I knew.

I choked back the tears that wanted to rise in my eyes for this girl, for me … I turned to her once more and leaned down, brushing a strand of her hair from her graying face. “What’s your name?”

Barely blinking, her pale eyes darted to me. “Carly,” she said, choking around her words.

“Just hold my hand and I’ll help you cross,” I said softly, forcing myself to meet her gaze so that someone would witness her ending as they had her beginning.

She smiled slowly, and I saw that in life she had been pretty. When she’d believed. When she’d had hope.

“The light?” Her eyes widened, glittering green for a brief moment in their otherwise colorless depths at the prospect of going somewhere beautiful after this life had been so cold.

I nodded, although I didn’t really know where she would go. I was only in training, but I hoped it was someplace good, where her tormented soul could rest.

She had small, feminine hands, I thought, as she laced her slippery fingers around my longer warm ones. She didn’t last long, her pulse giving one last flutter before sputtering out.

The room was suffused with the silence left behind in the absence of such a simple thing. The thundering lack of a person’s heartbeat had never seemed quite so loud. As life departed Carly’s mortal coil, her soul lifted from the body, but unlike some souls I’d seen that were light and buoyant, at peace with the next step in their existence, hers was outlined in darkness, and it rippled, suspended in space like a special effect in a bad horror film. Her gaze turned from her body to me, sorrow coming to settle on the slope of her bowed shoulders and in the recesses of her eyes. Regret was a fickle creature. It always came too late.

As a girl, K.M. always wished she’d suddenly come into magical powers or cross over into a Faerie circle. Although that has yet to happen, she instead lives vicariously through the characters she creates writing fantasy and paranormal.

When K.M. is not busy writing her next novel, she serves as a freelance editor and writer. She has a master’s degree in journalism from Syracuse University and a bachelor’s degree in English-Lit from Nazareth College of Rochester. K.M. lives in Upstate New York’s Finger Lakes region with her husband, her extremely energetic little boy, and their crazy goldendoodle Luna (short for Lunatic)

A very interesting excerpt. I'd like to read about souls crossing over. Thank you for the giveaway :)

I liked reading the author's view of "the modern reaper". Its always fun to read about the background on what is shaping the story.
PS. I liked Mort too! Soul Music (the "sequel", sort of) was pretty good too, but not as good as Mort.

I haven't ready Soul Music! I may have to pick that one up in the near future. :) - KM

Your book sounds real good and I hope to read it. I however am unable to participate in your wonderful giveaway. I have tried for several days, but it won't allow me to paste, print or anything. I was still able to tweet.

Oh no! Were you able to enter by tweeting?