14+ They need to find out who murdered their beloved teacher, and why the hot young substitute acts like she’s flirting with them. Then there’s the mysterious medallion that seems to have unleashed something malevolent, and an ancient prophecy suggesting Alex has the power to destroy humanity.

Fifteen-year-old Alex is a “spinner.” His friends are “dummies.” Two clandestine groups of humans want his power. And an ancient evil is stalking him. If people weren’t being murdered, Alex might laugh at how his life turned into a horror movie overnight.

In a wheelchair since birth, his freakish ability has gotten him kicked out of ten foster homes since the age of four. Now saddled with a sadistic housemother who uses his spinning to heal the kids she physically abuses, Alex and his misfit group of learning disabled classmates are the only ones who can solve the mystery of his birth before more people meet a gruesome end.

They need to find out who murdered their beloved teacher, and why the hot young substitute acts like she’s flirting with them. Then there’s the mysterious medallion that seems to have unleashed something malevolent, and an ancient prophecy suggesting Alex has the power to destroy humanity.

The boys break into homes, dig up graves, elude kidnappers, fight for their lives against feral cats, and ultimately confront an evil as old as humankind. Friendships are tested, secrets uncovered, love spoken, and destiny revealed.

The kid who’s always been a loner will finally learn the value of friends, family, and loyalty. 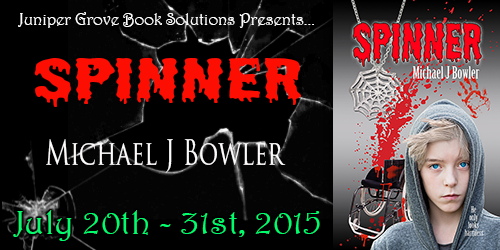 Juan was scared. He knew he shouldn’t be. There had been bad storms before, and power outages, too. But this felt different. This felt bad, like something bad had descended on this house. Jane’s room was upstairs and she’d never come down to check on him. Neither would Carlos, who had the other second floor bedroom.

Juan stood at his window dressed in a t-shirt and sweat pants watching the hard rain sleet against the glass. The wind was so strong that the individual drops made a pop pop pop sound like bullets he’d sometimes hear in the neighborhood at night.

He shivered. The power had only been off for an hour, not long enough for his room to get this cold. Something bad. That’s what it was. His abuelita would say the Devil was afoot, though she’d say his name in Spanish – Diablo – and that always made him sound more real. But she wasn’t there, and El Diablo was.

He grabbed the thick hoodie draped over his desk chair and slipped it on, hoping the fleece would shield his skinny frame against the intense cold. He felt so chilled he didn’t think he’d ever get warm again. Suddenly, he didn’t want to be alone. He knew it was stupid. He was fourteen-years-old. He’d been arrested. He’d been in juvenile hall. But this was different. This was scary.

Using the tiny flashlight he kept in his drawer, Juan left his room and moved into the darkened hallway. Flashes of lightning outside the windows sent grotesquely shaped shadows dancing across the floor and walls. The house was locked up tight. Jane was paranoid about stuff like that. Still, he inched his way slowly along the carpeted floor, his rubber shower shoes squishing slightly with each step. Another flash from the open kitchen door blasted its way into the hall, and Juan gasped.

Fear gripped him like a vise. He inched his way to the door and peered cautiously around the jam into the dark, empty kitchen. The door leading outside was closed. Weird shadows danced outside the curtained windows, but nothing moved. And there were no sounds except the pounding of rain against the roof and the glass, and the rumbles of thunder rolling through the night every so often.

Juan stepped cautiously into the kitchen, waving his tiny beam of light around in every direction, knowing nobody was there, but feeling a presence nonetheless. The door leading down to Alex’s room was closed. Alex wouldn’t laugh at him, or tell him he was acting like a baby. Alex would protect him.

He reached out and gripped the knob, pulling the door open slowly. He looked into the small elevator shaft leading down to the basement. The lift was at the bottom, which likely meant Alex was, too. Just to one side of the shaft was a metal ladder attached to the wall so people could climb up and down. Jane told Alex the previous owners had a crippled kid like him and set the room up special. That’s why social services placed Alex there, because the setup was ideal. The ladder existed in case of emergencies, and in Juan’s mind, this was an emergency. Alex could climb it if he needed to, so he must be okay down there. And “okay” was what Juan needed to feel.

Another blast of thunder, and a streak of light illuminating the shaft spurred him forward. He turned and gripped the top rung of the ladder, swung his feet around, and quickly descended to the floor. He alighted quietly to the carpet and turned to scan the room with his beam. The cold was worse down there, almost like being inside a freezer. He shivered and pulled his hoodie more tightly around his torso, flipping up the hood to warm his frigid ears. There were leaves all over the floor and water dripped from above. He raised his beam, followed the dripping water upward, and gasped.

The outside door stood open, and the elevator platform on that side of the room was at the top. Alex was there, sitting on the platform staring out the open door. Rain blasted in from all directions because of the twisting, frenetic wind. It splattered Alex and dripped from the edges of the platform, coloring the white carpet a dark, ominous black. Yet Alex did nothing. He sat there like he couldn’t move, and Juan’s heart began pounding even more.

“Alex?” he said, his terrified voice barely a whisper against the thunder and pounding rain. “You okay?”

There was no response. Juan moved cautiously across the room, the beam of light wavering because his hand shook. The outside lift had some kind of backup power in case Alex needed to escape a fire or something, so he went to the power switch and flipped it to “Down.” The motor whirred to life, startling Juan with its invasion of the otherwise disturbing silence, and the platform slowly descended.

He shuffled nervously back and forth, his flashlight beam aimed at the descending platform, his breath visible on his lips. The whirring motor ceased its grinding as the platform came to a halt.

He stared straight ahead like a zombie. Juan moved around to face him, lowering his beam to the floor as he did. With one trembling hand, Juan reached out to squeeze Alex’s shoulder. He felt something sticky and yanked back his hand. Whipping up the flashlight, he shone the beam onto his hand and gasped. Blood smeared his fingers and palm – fresh blood. He raised the beam to Alex’s face. Blood droplets were sprinkled on his soft, white cheeks. Heart thumping, Juan lowered the beam to Alex’s shirtfront. He recoiled. The shirt was soaked with a mix of water and blood.

GoodReads ** Pre-order on Amazon
About the author:

Michael J. Bowler is an award-winning author of eight novels––A Boy and His Dragon, A Matter of Time (Silver Medalist from Reader’s Favorite), and The Knight Cycle, comprised of five books: Children of the Knight (Gold Award Winner in the Wishing Shelf Book Awards), Running Through A Dark Place, There Is No Fear, And The Children Shall Lead, Once Upon A Time In America, and Spinner.
His horror screenplay, “Healer,” was a Semi-Finalist, and his urban fantasy script, “Like A Hero,” was a Finalist in the Shriekfest Film Festival and Screenplay Competition.

He grew up in San Rafael, California, and majored in English and Theatre at Santa Clara University. He went on to earn a master’s in film production from Loyola Marymount University, a teaching credential in English from LMU, and another master’s in Special Education from Cal State University Dominguez Hills.

He partnered with two friends as producer, writer, and/or director on several ultra-low-budget horror films, including “Fatal Images,” “Club Dead,” and “Things II,” the reviews of which are much more fun than the actual movies.

He taught high school in Hawthorne, California for twenty-five years, both in general education and to students with learning disabilities, in subjects ranging from English and Strength Training to Algebra, Biology, and Yearbook.

He is currently working on a sequel to Spinner.
His goal as a YA author is for teens to experience empowerment and hope; to see themselves in his diverse characters; to read about kids who face real-life challenges; and to see how kids like them can remain decent people in an indecent world.

Ok you got me hooked, lol I want to find out what's going on in this house! I love thrillers and this book is on my want to read list for sure :)