The Soul Stone (Kronicles of Korthlundia #2) by Jamie Marchant

18+ In this sequel to The Goddess’s Choice (Reliquary Press, 2012), the Crown Princess Samantha and Sir Robrek struggle to solidify their rule in the aftermath of the king’s murder and Duke Argblutal’s attempt to usurp the throne.

In this sequel to The Goddess’s Choice (Reliquary Press, 2012), the Crown Princess Samantha and Sir Robrek struggle to solidify their rule in the aftermath of the king’s murder and Duke Argblutal’s attempt to usurp the throne. They are thwarted at every turn by those who seek power for themselves and desire to prevent their marriage. Just when they think their problems are solved, a deadly curse begins to spread throughout Korthlundia and Samantha becomes pregnant.

In my sword and sorcery novel, The Soul Stone, Samantha must fight off priests, enemies, and her closest advisors while Robrek discovers the reason the goddess chose him as king, to defeat the Soul Stone, a stone capable of sucking the soul out of its victims, which threatens to obliterate all life in the joined kingdoms. Their archenemy, the Bard Alvabane, awakens the Soul Stone and plans to use its power to reclaim Korthlundia for her people (a people driven out over a thousand years ago by the hero Armunn). Armunn had to sacrifice his life and soul to contain the Soul Stone. Will Robrek have to do the same? Will the young couple have only a few short months to love each other?

Although having read The Goddess’s Choice adds depth to The Soul Stone, it is not necessary. The Soul Stone is a complete story of its own. In the palace courtyard, Robrek Angusstamm stirred the cauldron, brewing the potion that would cure Duke Argblutal’s former forces of the mass diarrhea caused by the princess’s supporters in the palace. Argblutal had attempted to usurp Samantha’s throne, and Robrek had just helped her retake it. The potion was ready except for the final ingredient—his magic. Robrek spread his hand over the cauldron and closed his eyes. Pure joy and pleasure flooded his body as his magic flowed out of him. Nothing felt this good. He smiled as he opened his eyes. The potion would provide a nearly instantaneous cure.

Robrek took the ladle from the waiting servant and began ladling out the potion to those waiting. They were bent over from discomfort, and the smell was atrocious. Robrek tried to breathe only through his mouth.

The crowd broke into cries of “Long live Queen Samantha!” He looked up and saw Samantha on the palace balcony. Holy Sulis, she’s beautiful! How can she truly be mine? It still seemed like a dream that they’d been handfasted the night before and that she had spent the night in his arms.

The man in front of him groaned, reminding Robrek of the task at hand. He filled the stricken soldier’s cup. “Thank you, Milord,” the soldier said, startling Robrek with the use of his new title.

Robrek filled another cup, then looked back at Samantha. A servant came forward and bowed. “May I, Milord?” The servant reached for the ladle. Robrek relinquished it, but felt awkward doing so. He wasn’t used to standing around while others worked. He supposed it was just one of many things he’d have to get used to as consort. Can I truly be king? He shook his head at the absurdity of the idea. Only in bards’ tales did peasants become kings, but what had his life been if not a bards’ tale?

Up on the balcony, Samantha raised a hand, and the crowd fell silent. “My people! Duke Argblutal murdered your king and tried to steal my throne. He has suffered the fate Sulis intended for such betrayal. Let us celebrate this victory, achieved with so little loss of life.”

The crowd roared its approval, and Robrek beamed at her. Duke Caedmon stepped onto the balcony beside Samantha, and Robrek frowned slightly. Caedmon disapproved of him, didn’t think him worthy of the princess.

Caedmon removed Argblutal’s head from the pike. Robrek suspected Darhour, the captain of the princess’s personal guard and a former assassin, had put it there. Where is Darhour? Robrek would have expected him to be by Samantha’s side, but the only two guards with her were Bearach and Conroy.

Caedmon raised his hand for quiet. “Let us remember the fate of those who raise their hands against the goddess’s chosen!” Caedmon dropped the head into the midst of the crowd. As the crowd roared and tossed and kicked the duke’s head about, Robrek felt a surge of nausea. For what Argblutal had done he’d deserved to die, but did they have to desecrate his remains?

Samantha’s eyes sought him out in the crowd, and she smiled down at him. Lost in that smile, he forgot everything else. 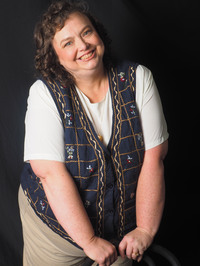 Jamie Marchant lives in Auburn, Alabama, with her husband, son, and four cats, which (or so she’s been told) officially makes her a cat lady. She teaches writing and literature at Auburn University.

Her short fiction has been published in the anthologies–Urban Fantasy and Of Dragons & Magic: Tales of the Lost Worlds—and in Bards & Sages, The World of Myth, A Writer’s Haven, and Short-story.me.

Author's Giveaway a Rafflecopter giveaway
Posted by CCAM at 2:30 PM

Thanks for hosting me.

Thanks for the awesome giveaway

I liked the excerpt, and have added this series to my book wishlist.

The stone is so pretty; it would be amazing to have my own soul stone :) I loved the excerpt!

This books sounds awesome and that pendent is so pretty!
Mary Loki

I really enjoyed reading the excerpt. This book sounds like a very interesting read. I will totally be adding it to my TBR list.