a new identity for herself - Healing Rain by Katy Newton Naas

Some people just naturally seem to have it all. Until five months ago, sixteen-year-old Rain Sawyer was one of those people. She had the perfect life, with a loving, wealthy family and a strong Christian faith, complete with popularity, sports, clubs, and good grades. 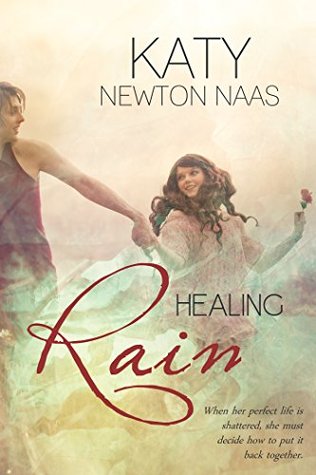 Some people just naturally seem to have it all. Until five months ago, sixteen-year-old Rain Sawyer was one of those people. She had the perfect life, with a loving, wealthy family and a strong Christian faith, complete with popularity, sports, clubs, and good grades.

When one tragic incident shatters everything Rain thought she knew, she finds herself five hours away, starting over in a small town very different from her glamorous big-city life.

Armed with a different outlook on life – one that no longer includes her faith – she struggles to create a new identity for herself. Determined to keep her dark past as secret, she navigates through a new school year, a new town, and new relationships while trying to figure out who she wants to be.

The main character’s name is Rain Sawyer. She is a fictional sixteen-year-old girl who has been through some pretty tragic, life-changing events over the course of the last few months. She is now trying to pick up the pieces of her once-perfect life and rebuild them…she’s just not sure how she wants to do that, exactly.

Rain was once very sure of herself and who she was. She was popular in her “old life,” and held very strong Christian beliefs. However, because of recent events, everything she thought she knew was severely shaken. She’s battling a lot on the inside and trying to hide it from the new friends she makes. She finds herself bonding with people who hang out in different circles, and she’s not sure which one she fits in (or WANTS to fit in). At times, she’s rude and sarcastic, but she’s a good girl underneath it all, struggling to figure out who she is.

Prologue
The smell of blood – sickeningly thick, fresh blood – filled my nostrils before I ever opened the door. I didn’t recognize that smell at first; I had never encountered that much blood in one place before. But I knew that the smell was off, somehow. The room
usually smelled just like my dad – a mixture of pine trees and cologne, a combination of aromas that I had never quite understood but they belonged to him. I knocked, but no one answered. Cautiously, I pushed open the door. “Dad?” I whispered as I entered.
That’s when I saw his legs. His signature khaki pants and brown loafers stuck out from behind his desk. He was on the ground and didn’t move when I said his name, didn’t even twitch as I opened the door and walked inside. “Dad!” I called again,
louder this time.
Oh no, he’s had a heart attack, I thought. I rushed over to the desk to see his face. But what I saw stopped me in my tracks like a deer in headlights.
I was frozen. My brain screamed at my body to move, to get away from the sight, but my feet were glued to the floor. My arms and legs suddenly felt like sandbags, and I collapsed.
This is not my dad. There was no face, no way to identify him for sure. But it was him. I knew the shape of his body, the clothes he wore. But the pool of blood under his neck took my breath away.
Who did this? Who did this to my father? I heard violent, blood-curdling screams, which I quickly realized were coming from me. I pleaded for help, still unable to get up off the ground, but it was useless. No one else was home.
Or was someone else in the house? My heart stopped beating as I considered this. Someone had broken in, had murdered my father in cold blood. Maybe I was next. Maybe my whole family was next. At that point, I almost wished for it. Death would be a
welcome release from the idea of losing my dad, the man I admired most in the world. My funny, loving, attentive, adoring father. My best friend. And now he was gone.
And that’s when I saw it. The gun. The murder weapon that was used to kill my father was still lying on the scene. I stared at it, too shocked to cry or get scared or have any of the other normal reactions I should have had.
My mind was racing but remained blank. I had to get up, had to call for help. Move, I commanded my feet. Get up and go call 9‑1‑1. Tell them there’s been a murder, get the police to catch whoever did this and make them pay.
And that’s when my brain began to truly process the scene. The gun – the murder weapon – was in my dad’s own hand. Oh, no, no, no, no, no, no, no, no, no.      And then the tears came, slowly at first before gushing out of my eyes until I couldn’t see straight anymore. I curled my legs up to my chest and hugged them, putting my head down on my knees as my shoulders shook uncontrollably. Oh, no,
no, no, no, no, no, no, no.
I forced myself to look back at my dad one last time, just to make sure my mind wasn’t playing tricks on me. He couldn’t have done this. He couldn’t have.


I looked up toward the sky and asked one simple question: Why?

From the time she was old enough to talk, Katy Newton Naas has been creating characters and telling stories. As a child, they sometimes got her into trouble. She knew she wanted to write books when she won a Young Author's competition as a second-grader for her short story titled, "The Grape Pie." (Don't let its tasty title fool you - it was actually a sad little tale!)

Katy devoured books as a child and young adult, always doing chores and odd jobs in order to make enough money to buy more of them. Though she continues to age, her true literature love is and has always been children's and young adult fiction.
​
Katy currently teaches middle school reading and high school English in southern Illinois, as well as children's church. She graduated from Southern Illinois University-Carbondale with a bachelor's degree in English Education and a master's degree in Reading and Language Studies. She enjoys her life out in the country with her husband, her sweet and rowdy young sons, and all her four-legged kids: Shakespeare, Poe, Morgi, Cappy, Ana, and Gray.

She loves creating both realistic and futuristic stories about kids, tweens, and teens, and feels so fortunate to get to work with them every day as a teacher.

Before reading the excerpt I didn't expect such a tragedy. What went through my head was a family car accident, a death from the accident or natural cause, but not that. Not what seems like a bloody suicide. The imagery was vivid in my head reading through the excerpt so I'm excited to have added this on my TBR shelf.

Thank you for hosting me!