Everyone deserves happiness. - Had a Great Fall (The Wish Makers #4) by Shawn McGuire

Everyone deserves happiness. Is Robin the exception?
A cross-country move to a new state offers Robin Westmore the chance to get away from the relentless bullies and reinvent himself. But on the first day at his new high school Robin finds himself in front of Zane, the school’s star pitcher and chief tormentor, at the exact wrong moment and right back into the role of victim. Hopeless, he wishes for it all to stop. 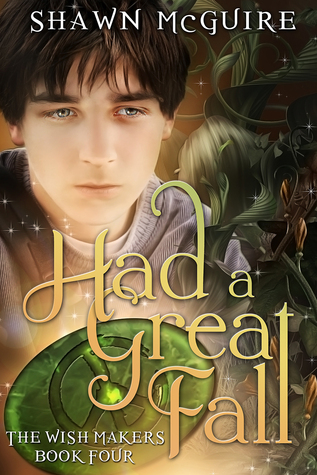 Everyone deserves happiness. Is Robin the exception?

A cross-country move to a new state offers Robin Westmore the chance to get away from the relentless bullies and reinvent himself. But on the first day at his new high school Robin finds himself in front of Zane, the school’s star pitcher and chief tormentor, at the exact wrong moment and right back into the role of victim. Hopeless, he wishes for it all to stop.

When Desiree, the new leader of the genies, grants Robin’s wish he’s sure things are finally going his way. But problems in the magical realm have made Desiree equally hopeless and too distracted to give Robin the attention he needs.

As Desiree hides from her responsibilities, Robin disappears into the video game he’s created. There he finds excitement, adventure, and control. When the game presents him with a real escape from his tortured life, will he take it? 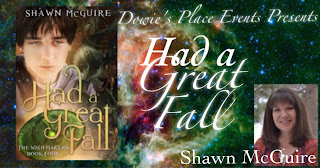 “You stayed up late again?” she asked as she took a box of tea from the back of the cabinet.

“Lots of homework,” I said. She knew I spent my summer developing the game. She didn’t know I spent at least two hours a night, after homework, still working on it.

She never protested when I said the dark circles under my eyes were studying related. Usually that was the case. Sometimes, though, Zane’s harassment got really intense and the circles came from lack of sleep due to nightmares.

There were days when he would stop in the middle of whatever he’d been doing and charge at me from across the lunchroom to slam into me or sneeze on my lunch. Once he even stood in front of me flapping his arms and making birdcalls. In the middle of the lunchroom. Why didn’t someone record that and put it up on the web? He looked ridiculous. Didn’t anyone else see that?

“Are you feeling all right?” Mom put the back of her hand to my forehead and I resisted the urge to swat it away. It was a caring touch. One of the few signs lately that someone gave a damn about me.

If I told her what was happening, would she do something? Maybe I could do online schooling. She knew I was a self-motivator and that she never had to check to see if I’d done my homework. Grades were everything to me. I’d never had less than a 3.8 GPA. The only reason it fell below a 4.0 was because of gym class. I could barely lift my backpack let alone do a pull-up. Maybe online school was the answer to my problems.

Her phone rang just as I was about to ask.

“Hello… Oh, I’m so sorry.” She glanced at the clock on the microwave. “I was thinking there was a one hour time difference. Five months and I’m still adjusting to being in the Mountain Time Zone. Let me get to my office and I’ll call you right back.”

She was already heading out of the kitchen when I said, “Bye.”

“Oh, sweetie.” She came back and kissed my forehead. “If you’re not feeling well you can stay home. Or call if you need to come home early. I’ll give permission for you to leave.”

She knew I got motion sick on the bus. If I said I was nauseous, would she still make me ride the bus or would she take twenty minutes off of work to come and get me?

I toasted a piece of cinnamon-raisin bread and spread on a thick layer of butter. Then I tugged on my coat and headed out the door. With every step I thought of how Zane would be waiting for me and that single bite of toast turned into a little rock in my stomach. I paused at the garbage can next to the garage and lifted the lid to toss in the barely-eaten piece when someone came around the corner, making me jump.

“Are you Robin?” A girl with long dark hair that looked kind of like dreadlocks but kind of not stood at the corner of my garage. “Wait. You’re not throwing that out are you? That’s so wasteful. There are hungry people who would gladly eat that.”

I looked from her to the toast and then shoved it in my mouth. I couldn’t handle a lecture right then.

“Who are you?” I asked through the mouthful of bread-covered raisins.

She made a disgusted face. “Manners. Heard of them?”

I chewed, swallowed, and brushed the crumbs off my hand. “Sorry. Yes, I’m Robin. Who are you?”

She smiled then. She had a great smile, one that made her eyes crinkle at the corners. “I’m Dara.”

“Nice to meet you. Can I help you with something?”

“I don’t know. Possibly.” Dara put her hand to her mouth and tapped a navy blue-painted fingernail against her blindly-white teeth, like she was contemplating the question. “Teasing. Nothing you can do for me, thanks, but I can sure help you.”

I shook my head. “You’ve got the wrong person. I don’t need help.” At least none that she could give. I doubted she could take on Zane.

She knew my name. Whatever that meant.

“You just moved here from Wisconsin.”

“Five months ago. So not just but yes, I’m from Wisconsin.”

“You’re being bullied by some kid named Zane and you want it to stop.”

I stood there, next to my garbage can, wondering who this girl was and what she was up to. It was common knowledge that I was Zane’s favorite target. Of course I wanted his harassment to stop, anyone would, but what could she possibly do about it?

“Look, I don’t know who you are but if Zane sent you—”

“Zane didn’t send me.” She paused, just for a beat. “I guess you could say the universe did.”

I didn’t need this. I had enough drama in my life. I didn’t need this chick adding crazy to it as well. Marijuana was legal in Colorado. Maybe she’d been dining on pot gummies or something. The universe sent her. Yeah, right.

I started walking. I had to go six blocks in about two minutes. If I wasn’t there I’d have to either wait for the next bus, which wouldn’t be for half an hour, or beg my mom for a ride during which I’d have to listen to her chew me out about responsibility.

Dara followed, her arms wrapped tightly together. She wasn’t wearing a jacket.

What was she saying? “Are you a prostitute?”

“What? God.” She made a face. “No, I’m not a prostitute. What kind of hooker comes up to someone by their garage first thing in the morning?”

“I wouldn’t know. I’m not privy to the methods of the, uh, working class.”

She said nothing for half a block and then started laughing. Probably at the thought of me soliciting a hooker.

“Let me try this again.” She cleared her throat and squared her shoulders. “Yesterday afternoon around three-forty-five you made a wish.”

“I did what?” Oh yeah, the dandelion. “Do you live next door or something? How could you know that?”

“I told you, the universe sent me. Your wish has been granted.”

Shawn McGuire is the author of young adult novels that blend contemporary settings and issues with a touch of fantasy and magic. She started writing after seeing the first Star Wars movie (that's episode IV) as a kid. She couldn't wait for the next movie to come out so wrote her own episodes. Sadly, those notebooks are long lost, but her desire to write is as strong now as it was then.

Her books deal with harder topics (death of a sibling, divorce, dating violence, bullying, and teen suicide) because she believes it is important to talk about these things. Those kinds of topics can be hard to handle and a bit overwhelming, so she infuses a bit of humor in her work as well because she also believes that a sense of humor can help you get through just about anything.

Shawn lives in Colorado with her family where she spends her time reading, cooking and baking, practicing yoga and meditation, and hiking and camping in the spectacular Rocky Mountains.

I can't wait to read this book. Is this a series? I noticed on Goodreads that there are a 1,2,3,books? Should I read them in order? I love series books.

I will not purchase anything to enter a giveaway. It makes the giveaway seem shady when you ask people to purchase goods in order to win the contest.