She needs out. Now. - Rebounding by Shanna Clayton

17+ REBOUNDING follows characters that were introduced in the novel PRETENDING, but you do not need to read PRETENDING beforehand as REBOUNDING is its own story and is a standalone novel. 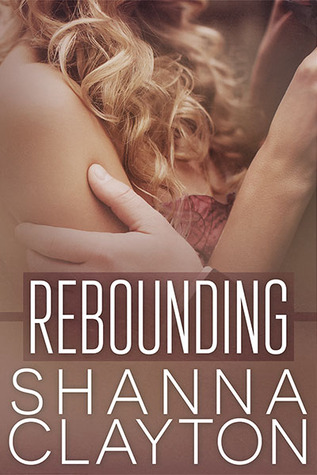 Charlotte Hart used to have the perfect life.

Or…what she thought was perfect.

President of her sorority. Legions of friends. A promising career in journalism. It’s exactly what she wanted, exactly what she’d always planned. But after her slimy bastard of a boyfriend cheats on her with her archenemy, everything she built comes crumbling down.

She needs out. Now.

But leaving everything behind means she has to live with Max, a mysterious guy from the past. Living with him isn’t the wisest decision she’s ever made—Max isn’t friendly, he keeps a lot of secrets, and sneaks out in the middle of the night. There’s definitely something shady about him, but at least he seems to understand what she needs. In fact, he seems to know it better than she does.

When Charlotte shows up on Max Archer’s doorstep, he knows he can’t turn her away. He wishes he could—she’s broken, lost, comes with too much baggage, but he owes her his life. Whatever she wants, he’ll find a way to make it happen. Problem is, Max doesn’t count on Charlotte wanting more than he’s willing to give.

He doesn’t count on her wanting his heart.

Four years.
That’s how long Wesley Kent has to live with the girl his dad shacked him up with, and then he can collect his inheritance and escape small town life. He gets through the prison sentence by pretending Dahlia Reynolds doesn’t exist. With three years down and one more to go, he doesn’t expect much to change. That is, until the girl that’s not supposed to exist sharpens into his reality, making it impossible to ignore her.

Three years.
That’s how long Dahlia Reynolds has been living with a total stranger. She’s convinced herself Wesley Kent is no more than an illusion in the hallways. It’s easy to do, especially since that same illusion has never spoken more than two words to her. But one mistaken identity later, and she finds herself caught up in the mysterious world Wesley lives in. One by one, he begins knocking down the safe, comfortable walls she built, leaving her wondering what his motives are. Does he want to expose her—or free her?


It’s just the two of us, our eyes locked on each other. She’s beautiful. I hadn’t noticed that before, but now it’s hard notto notice it. Everything about her is perfect and symmetrical, to an almost unattainable level. Flawless skin, blonde hair and slender, she’s the type of girl you’d think was Photoshopped if you saw her on a magazine cover. For all her perfection though, the thing I find most attractive is the way her hair keeps spilling from the knot she tied it into. It’s the only thing out of place.

She stands up, and then walks over to my bed, inspecting me just as curiously. The way she looks at me makes me wonder if I look as beat up as I feel.

“How are you?” she asks, breaking the silence.

“Okay, I guess, for someone who’s just been stabbed.”

“You were stabbed seven times,” she repeats. “I heard one of the doctors say that.”

Her eyes drift over my face and across my chest, pausing over my left shoulder, where I remember seeing most of the blood. That’s where they cut me the deepest—right beneath my shoulder blade. Even with the morphine drip I can feel it.

She pinches her brows together like she doesn’t understand the question. “You were in trouble.”

“Most people would’ve run out of that alley as fast as they could.”

“And leave you there to die?” She shakes her head, frowning. “Where I’m from, we don’t just look the other way.”

I don’t believe her. People are generally the same everywhere. When there’s trouble, they get scared. And when people get scared, they run. I’m pretty sure she’s the exception, but I don’t tell her that.

“I suppose I owe you for tonight.”

“Yeah, I kinda did save your life,” she says, her blue eyes sparkling. “But no biggie.”

“I don’t like owing people debts,” I tell her seriously. “Let me write you a check. I have money.”

“Is that how you usually handle this type of situation?” She sounds amused, not at all excited by the prospect of money.

I shrug, and then grunt when I feel a sharp pain to my shoulder. “I don’t know. I’ve never been in this type of situation.”

She smiles, and if it’s even possible, becomes more beautiful. It makes me catch my already unsteady breath.

“Everyone wants money,” I argue, because it’s the truth.

She shakes her head, uncompromising.

I let out a sigh. When I said I didn’t like owing people, I meant it. A debt will haunt me, especially one as big as this. “Then what do you want?”

“Hmm.” She tucks her hair behind her ear. “Maybe a favor? One day I might need your help.”

“You didn’t know me either, and yet, here we are.”

“Why don’t we just chalk this up to what it is—a good deed. It makes me feel good to think of it that way.”

She flashes me that amazing smile of hers again, and it has the same effect on me as it did before. I try to speak, but nothing comes out. I’ve never been around someone with the ability to leave me speechless. I’m not sure I like it.

“It may be a good deed in your eyes,” I say, trying to piece my thoughts together. “But I still see this as something I need to repay.”

She leans against the side of my bed, invading my personal space. She’s so close I can smell her. For being stuck in a hospital all night, I wonder how she can smell so good.

“In that case, I promise one day you will repay me.”

She shakes her head. “Nope.”

“Are you planning to steal my firstborn child?”

“Yes, now you’re onto the inner workings of my evil mind.”

Whatever she is, she’s the opposite of evil. I don’t understand her, but part of me wishes I could keep her around to remind me of what people are capable of.

“Who are you, Charlotte Hart?” I say, shaking my head. “I thought your brand of human went extinct a long time ago.”

“Nah,” she says, grinning. “There are still a few of us out there.”

The way he’s carrying me makes it hard to look at him or speak to him. However, I can feel him. Even in my state, it’s hard not to notice the rippling muscles pressed against my back. He’s shirtless, and the warmth of his bare skin against mine isn’t all that unpleasant. Now that I’m aware of it, I can’t focus on anything else.

We finally reach the shore and Max sets me down on the sand. Drops me, more accurately. I rub my hips and butt, grateful to know it probably hurt less than it would if I were sober.

Saltwater stings my eyes, or else I would roll them. “Oh, please. I’m just trying to have fun.”

“It’s storming, kid, or are you really that oblivious?”

I wipe my eyes and stand up, sucking in a small breath as I do. Even my ex, who trained rigorously almost everyday, didn’t have a body as toned and built as Max’s. I shouldn’t stare, but I can’t help it.

He points toward the sky like he’s speaking to a toddler. “Does it look like swimming weather to you?”

As if on cue, a deafening crack of thunder booms all around us, lightning splitting the dark sky. Rain mists over the beach, millions of tiny raindrops hitting the surface of the ocean all at once.

Max and I look at each other, almost daring the other one to speak. The whole thing was too perfectly timed.

Goodreads ** Amazon
About the author:
I'm not sure if my mother predestined me to become a romance author when she named me after her favorite Kathleen Woodiwiss book, but that's what happened. Now I live and breathe all things books. When I'm not glued to my desk writing, I can be found eating too much chocolate, obsessing over Game of Thrones, and cyber stalking my favorite authors. Keep up with me on Facebook and Instagram. I love hearing from readers!

Thank you for featuring my series here on Mythical Books!

It was our pleasure to discover you and to post about your book :)