the most dangerous quarry of all… himself - Traveler by Dennis W. Green

Blending mystery, police procedural and sci-fi, Traveler is a thriller in the tradition of Daniel Suarez and Dean Koontz, with just a dash of Jim Butcher.
Police detective Trav Becker can travel between parallel realities. So can other versions of him. And one is systematically killing every Trav he can find. 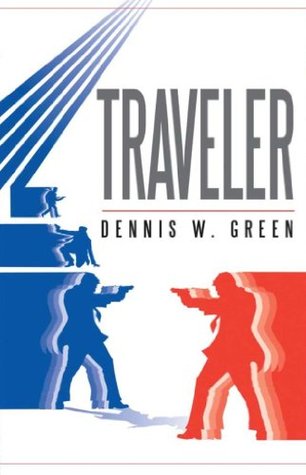 Blending mystery, police procedural and sci-fi, Traveler is a thriller in the tradition of Daniel Suarez and Dean Koontz, with just a dash of Jim Butcher.

Police detective Trav Becker can travel between parallel realities. So can other versions of him. And one is systematically killing every Trav he can find.

Trav must fight to keep the very fabric of time itself from unwinding as he hunts the most dangerous quarry of all… himself.

He must hunt the most dangerous quarry of all… himself.

1. SF and SF Fantasy allow a lot of twists and unexpected turns. What would be the minimal set of “rules” to respect and, if there are no such rules, what are the traps an author must avoid?
The thing that is simultaneously both the greatest and the hardest thing about sci-fi and fantasy is that the author gets to make up pretty much everything! When the writer creates an interesting concept and then abides by the rules he or she creates, you have a great book. But if a reader thinks the writer breaks the rule, it can spoil the entire experience.

Not long ago, I read a book by one of the great sci-fi writers of all time, and it was excellent right up to the end, when the conclusion came in such a quick deus ex machine fashion that it ruined the entire read.

This is not true only of sci-fi and fantasy, of course. If the detective in a mystery suddenly and miraculously produces the clue that allows him or her to solve the mystery without the writer laying the groundwork earlier in the book, the reader can feel cheated.

I think playing fair with the reader is the single most important thing a genre writer must do. All clues must be hidden in plain sight, and the reader must be given the opportunity to solve the protagonist’s problem. Ideally, that will happen at the same time the protagonist does, but if the reader gets there first, so be it. In that case, you just have to hope they enjoyed the ride enough that solving the problem ahead of the hero makes them feel proud and smart, rather than cheated.

2. Traveler has the same character, Trav (the traveler), in different versions. What can be changed in his characteristics and behavior and how did you determine his unchangeable core? How different is Trav after all?
The idea of how our circumstances can influence our personality and even our identity is at the core of the Traveler books. The broken-down and alcoholic Trav we meet at the beginning of the first book experiences a dramatic shift in his outlook when his circumstances improve. Conversely, when that Trav (who thinks of himself as pretty closed-down emotionally) meets the version of himself who has been responsible for the deaths of other Travs, even our Trav is surprised by how hard-edged and bitter this edition of Trav Becker is.

What is Trav’s unchangeable core? He’s a cop, and that means that he will always stand for those who need his protection, whether from a mundane criminal or a crumbling time stream. Every cop knows he or she may be called upon to make the ultimate sacrifice. But what Trav discovers is that the ultimate sacrifice may not be death, which is quick, but rather the life sentence of knowing the decisions he makes may have a tragic effect on someone close to him, or himself, and bearing the solitary burden of knowing as awful as it was, it was still the lesser of two evils.

3. Your author presentation starts with: “Specialization is for insects”. How your vast and varied professional expertise helped you to create Traveler?
I often say I raise brand confusion to an art form. In any given week, my posts to Facebook or Twitter can range from a retrospective on a jazz artist to a triathlon photo gallery to a book excerpt. Like Trav Becker, who has to adjust quickly to each new stream of reality he travels to, I have to shift daily among the many incarnations of Dennis Green. But I guess everyone else has to shift around the different aspects of their personality, from parent to worker to spouse and back again, so my life isn’t much different than anyone else’s.

The one thing that prepare me to write Traveler was not writing, it was reading. I don’t have a degree in English, have never taken a writing class, but somehow managed to write a book. The only thing I can credit this to is that my lifelong hobby of reading helped me internalize the structure of character and plotting, developing kind of an internal template for what made a book good, and then working to make my writing match it. So, my advice to any beginning writer is to read. Read both in and out of your desired genre, so you can break convention. Read good books to help you develop that internal template. Read bad books so you what not to do. And never, never give up.

4. How difficult and /or different is to continue Traveler’s story in Prisoner? What are the real challenges?
The first and most important thing that Traveler gave me was the conviction that I could take on another book. Finishing that first book gives you an immeasurable confidence boost headed into the next one. There is no longer any uncertainty that you can write a book, because you’ve done it.

On the other hand, I went into Prisoner with only the vaguest of ideas of what was going to happen. I had never intended to write a second Traveler novel, just wanted to leave it open enough at the end to give the reader the idea that there was more to the story. Then, toward the end of writing Traveler, I had the idea of a scene where Trav, some time after the events of the first book, is minding his own business when he comes face to face with a bleeding, dying version of himself. It was just too delicious to let go. So then, the only challenge was to find another 79,000 words of story. But as I got into Prisoner, I realized I really wanted to tell the rest of the tale I had hinted at in Traveler. And hopefully, those who read the rest of the trilogy will enjoy the ride.

5. What are the disadvantages when your work is compared with those of other authors?
Every writer’s work is a synthesis of his own voice mixed with things he has picked up from all the books he or she has read. But that said, I live in constant fear that readers will start to point out all the things I have swiped from other writers. Like “He totally gets his narrative style from Harry Dresden.” Or “I can sure tell he read Zelazny’s Amber books as a kid.” Or Robert Parker’s Spenser. Or any one of the other dozen+ writers who have influenced me.

But at the end of the day, I can only hope that people enjoy being able to ferret out my various inspirations, and again, just enjoy the ride.

Specialization is for insects.

Ask someone how they know Dennis Green and you might get any one of the following: Writer, DJ, actor, MC, swimmer, teacher, reporter, tech geek, husband, or dad. So it’s little wonder his favorite expression is the above quote by Robert Heinlein’s spacefaring immortal, Lazarus Long.A popular radio personality in his native Iowa, Dennis’s adventures as a DJ were covered by newspapers from Anchorage to Los Angeles. He has also worked on the stage, TV, and independent film. He is one of the Midwest’s most popular MC’s, hosting dozens of events each year.

Dennis’s first novel, the sci-fi detective thriller, Traveler, ranked in the Top Ten in the 2014 Ben Franklin Independent Publishing awards, and has a 4.9 review average on Amazon.. Prisoner is the second volume of the Traveler Chronicles, and will be out in the summer of 2015. Trav Becker’s saga concludes in the final volume of the trilogy, Hunter, which is due in 2016.

Dennis’s writing has appeared in the anthology Sadistic Shorts, magazines including Grift and Romance and Beyond, as well as his own blog at denniswgreen.com. He also writes for and edits the triathlon news site heartofamericatri.com.

By day, he is the general manager of Iowa’s only jazz radio station, KCCK-FM. And if it’s 5:30 am, you can probably find him in the pool, working out with the Milky Way Masters swim club.

Great interview! Totally get what Dennis is saying about how the reveal comes together (or doesn't) in some books. It is one of the reasons I tend to stay away from mystery novels.

I liked the book description, and I would love to read this story.

Interesting! Thanks for sharing and hosting the tour :)

Thanks for the giveaway. This book reads yummy!

I would love to read this book and any further books in this series :)

I agree that the conclusion has to make sense and the story has to "follow the rules"!

This sounds like a good story. I like time travel and sci-fi books. I hope that it is a big success!

love! thanks for the chance!

I would love to read this book. It sounds like a great read.

Cremona, thanks so very much for hosting a stop on the blog tour. I am so pleased and honored to be featured on your site!

Cremona, thanks so very much for hosting a stop on the blog tour. I am so pleased and honored to be featured on your site!