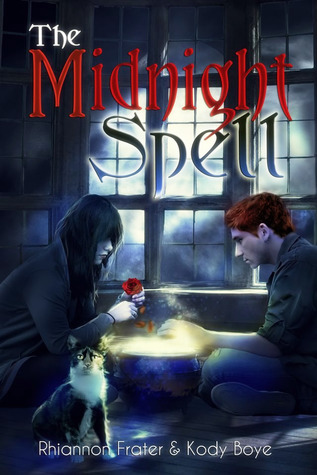 Best friends since kindergarten, Adam and Christy have always been the perpetual outsiders in their small town in Texas. The other kids call Adam gay and Christy a witch.

On both counts the bullies are right.

Their junior year in high school seems destined to be the same old same old until Christy decides to cast a love spell for Adam at the midnight hour. The next day an alluring and mysterious boy enrolls at school and sets hearts aflutter, including Adam’s. Meanwhile, Christy’s mad crush on the handsome football player Ian seems to be going nowhere fast and her witch puberty is making her life miserable.

When a great evil arrives in town that threatens everything they hold dear, the best friends realize that finding a boyfriend is the least of their worries. Soon Adam and Christy will have to battle a force of darkness that has killed in their town before, and will again.

How do you get to write together? What were the biggest challenges?
Rhiannon: Well, we’ve been friends for a very long time, so when we brainstormed The Midnight Spell into existence one night it seemed natural we’d write it together. I never would have collaborated with him if we weren’t already such good friends. I knew it was going to be rough at times, but because we know each other very well we avoided the pitfalls other authors experience while working on a project together. Also, we were able to set up our laptops across from each other at my dining room table and discuss the book as we wrote.

Kody When we wrote The Midnight Spell, Rhiannon and I were sitting directly across from each other at her desk or the dining room table. For a short period, we’d tried doing it away from one another, but it became apparent that wouldn’t work (thus the close proximity.) The biggest challenge was developing a seamless rhythm. Neither of us are much for collaborating. That was a big hurdle to jump.

Some readers and even some authors say that entertainment is all they want/offer. What do you think about the opinion that a good book, regardless its genre, must send a message?
Rhiannon: I’m not big on messages per se. I write to entertain people. I want to give them a story that takes them out of their normal life and give them a taste of the extraordinary. That being said if people glean a message from my books about accepting people who may not be like them, I’m fine with that. My cast of characters are usually from all walks of life. In The Midnight Spell we did make a conscious decision to write about a gay teenage boy who wasn’t any of the clichés you find in fiction. He was just a kid who happened to be gay. We’ve had a very positive response from readers about Adam’s positive portrayal.

Kody: I think that, a lot of the time, books send their own message if they are powerfully written enough. We all resonate with some aspect of a piece of art in the end. Identifying with a character, understanding the situation, learning or re-learning a lesson—if done well, you don’t have to force ‘the message’ within the story. It’ll come naturally.

From the reviews I read on Goodreads, I can presume that humor is present in The Midnight Spell. What humor can bring to a paranormal / fantasy story?
Rhiannon: Realism. LOL. Kody and I laugh all the time when we hang out together. Humor is a huge part of our friendship. Humor is just a big part of life. I’m always surprised when I read a book and everyone is just so serious. Even in difficult and frightening situations people tend to deal with stress with humor.

Kody: Realism. As Rhiannon said, humor is an aspect of life, and often seems to come out of the most stressful or unusual situations. It may not happen at the time, but it could always occur later.

Kody: There would be no point for characters like Olivia or Drifter to exist. The fact that we included Christy and Adam’s parents as part of the main cast (I think) was a shock to people. Most young adult novels present this disenfranchised relationship between the protagonists and their parents, so giving those relationships to our heroes was something some thought unusual. Secondary characters don’t always serve the purpose of helping construct the main characters. More often than not, they are (and should) be used to further round out that world.

What a fantasy story must have and what should avoid?
Rhiannon: Well, I think fantasy should always have a nice dose of wonder. People should be excited by the supernatural elements and how they fit into the story. As for what to avoid, I really dislike when an author creates a whole new lexicon that forces you to flip to the glossary back of the book to find out what they characters are talking about. I want readers to lose themselves in the story and if they have to keep looking up words the author created to replace common things like coffee, clothes, horses, etc…it takes them out of it.

Kody: As someone who writes fantasy, I can honestly say that there are really no ‘must haves’ or ‘must avoids.’ Depending on the story, anything is possible. One thing I personally dislike are cliffnotes in margins in fantasy novels. I can understand them, to a degree, but the aspects of your story should be portrayed within the actual text, not subtext.

Rhiannon Frater is the award-winning author of over a dozen books, including the As the World Dies zombie trilogy (Tor), as well as independent works such as The Last Bastion of the Living (declared the #1 Zombie Release of 2012 by Explorations Fantasy Blog and the #1 Zombie Novel of the Decade by B&N Book Blog), and other horror novels. In 2014, her newest horror novel, The Mesmerized, will be released by Permuted Press. Dead Spots will be published in 2015 by Tor. She was born and raised a Texan and presently lives in Austin, Texas with her husband and furry children (a.k.a pets). She loves scary movies, sci-fi and horror shows, playing video games, cooking, dyeing her hair weird colors, and shopping for Betsey Johnson purses and shoes.

Website ** Goodreads ** Facebook ** Twitter ** Pinterest
Kody:
Born and raised in Southeastern Idaho, Kody Boye began his writing career with the publication of his story [A] Prom Queen’s Revenge at the age of fourteen. Published nearly three-dozen times before going independent at eighteen, Boye has authored numerous works—including the short story collection Amorous Things, the novella The Diary of Dakota Hammell, the zombie novel Sunrise and the epic fantasy series The Brotherhood Saga.
He is represented by Hannah Brown Gordon of the Foundry Literary + Media Agency.

Authors' Giveaway
a Rafflecopter giveaway
Posted by CCAM at 4:00 PM