Excerpt and Giveaway: Son of Set (Descendants of Isis #2) by Kelsey Ketch 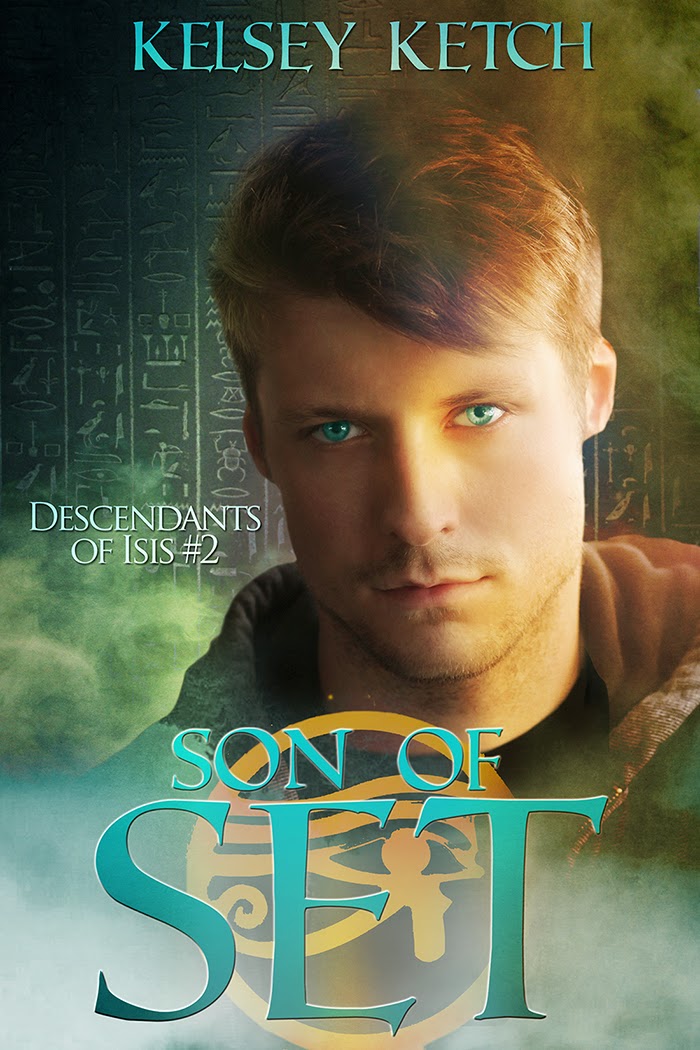 Seth O’Keefe has broken the laws of his god. He never thought he would sacrifice his own future to protect a Daughter of Isis. But when the Sons of Set discovered Natti is the Secret Keeper, he had no choice. Now, Seth and Natti are on the run from his father, who wants nothing more than to see Seth dead. With no allies, Seth turns to the Daughters of Isis for help, hoping they would protect Natti. But when they meet the Daughters, he discovers a secret that puts both their lives in more danger. Low on options, Seth sees only one possibility for survival. He must help Natti solve an ancient puzzle and find the secret name of Ra.

Natara “Natti” Stone is having a hard time swallowing the truth. She can’t believe what she has learned in the past twenty-four hours: Seth is a Son of Set blessed with charm; she is a Daughter of Isis blessed with a sliver of Ma ‘at; the locket her grandmother gave her holds an ancient Egyptian secret linking to Osiris and Isis. That along with being tortured and brutalized by the Sons of Set, she can hardly hold herself together. Thank God for Seth’s touch! That warm, tingling sensation that drowns it all out. Yet her heart struggles to stay focused. She must quickly embrace her destiny before the secret name of Ra falls into the wrong hands.

“Her mouth parted slightly, waiting for Seth to breathe life into her own body, just like in the story. She wanted him to awaken her senses.”

The last thing Natara “Natti” Stone wants to do is to start anew at Setemple High School. She wished she had never left London. Yet the brutal murder of her maternal grandmother has made her life very complicated. The only clue related to her murder is an ancient, encrypted necklace Natti discovered after her grandmother’s death. And if trying to adjust to American life is not enough, Natti is being stalked by a mysterious, charming high school senior, Seth O’Keefe, who is annoyingly persistent in his attempts at seduction.

Seth O’Keefe is secretly a member of the Sons of Set, an order that worships the Egyptian god of chaos. Seth’s blessing from Set, his “charm,” never failed, except with one person: Natti Stone. Her ability to elude him infatuates and infuriates him, and he becomes obsessed with the chase. But the closer he gets to her, the more his emotions take a dangerous turn, and he risks breaking one of the most valued covenants of his order. The punishment for which is a fate worse than death.

The adventure this unlikely couple becomes engulfed in could cost them their lives and their souls.

Natti rested her chin in her hand and sighed as she stared at Seth’s empty seat. Her fingers tapped against the plexiglass, near the napkin she had written the translation of the locket on. And though its words continually cycled through her thoughts, she wondered where the hell Seth was and why he had left in such a hurry.

To get her mind off his strange behavior, she skimmed the photographs scattered over the table. A family portrait of a mother, father, and daughter caught her interest first. The landscape was almost a blinding white with misty mountains in the distance. A wooden deck led out to an expanse of flat sand. The family all wore big, silly grins on their faces; the father tickling the little girl while she laughed hysterically. Next to them, Natti could just make out a sign, which read:

The picture tore at Natti’s gut slightly, thinking how lucky the young girl in the picture was. Natti never had the opportunity to travel anywhere with her mother. As far as she could remember, it had always been just her and her father exploring the streets of London, driving out to the White Cliffs of Dover or visiting Yorkshire to get away from the city.

Heart aching, her line of sight drifted to another photograph right below the first. It was a landscape, almost a professional grade photograph. In the brilliant sunlight, the dark mountains caressed the barren valley below. The wind propelled the sand over the wave-etched dunes, making it look as if it was clear water racing toward the camera. Natti stared awestruck at the image. She had never seen anything quite like it before. From her perspective, it truly could have been a river, flowing through the mountain range. It tugged at her memory, retrieving a part of the locket’s translation: Mountains protect the flowing sand.

Startled, Natti was jerked from her thoughts when a mug of steaming hot water hit the table. She looked up at the middle-aged waitress. The woman’s curly, dark hair was tied back with a scarf, which flowed over one shoulder. She plunked down a selection of tea, sugar packets, cream, and a glass of Coke.

“Sorry for the delay. Alison had a family emergency.” The woman snapped on a piece of gum while she spoke. “So I’ll be your server this afternoon. Are you ready to order?”

Natti quickly thought of the turkey and avocado BLT she selected from the menu. “I am, but . . .” She glanced at Seth’s empty seat. “I think I’ll wait for my friend to return before ordering. He should be back in a few minutes.”

The woman gave a sly smile. “He’s a real honey, that one. I’d say if you haven’t snatched him up already, you’d better pounce before some other girl nabs him.”

“Or three,” Natti muttered under her breath as she thought how Seth could juggle multiple women at once. “Um, before you go, could you tell me where this photo was taken?” she asked, pointing to photograph of the mountains and flowing sand.

The woman frowned when she looked at the picture. “I’m not sure, actually. Lydia and her husband traveled to practically every desert in the world. Erin was an amateur photographer and simply loved desert landscapes.” She rubbed her chin like she was thinking. “But knowing Lydia, she probably has the location written on the back. If you just hold up your mug for a second, it should be close enough to snag . . .”

Natti watched the waitress lift the plastic enough to slip her pinkie in and pinpoint the photograph with her nail. She carefully slid the picture out and flipped it around.

“Yep. Predictable Lydia. This was taken in Death Valley, California.”

Natti’s excitement soared when the waitress read the name, even though she had never heard of Death Valley before. “Do you know if there are, or were any, rivers or lakes there?” She knew she was technically breaking her promise to Seth by asking, but she just had to know.

“Sorry.” The waitress shrugged. “I was born in Fallon and haven’t ventured out of it once. I’m sure you can find all that out on the internet though. Everything is out there nowadays. You can use the free Wi-Fi, if you’d like.”

Natti’s heart fell. She didn’t exactly have a computer or a smartphone at her disposal, which made linking the location of Ra’s secret name to Death Valley quite a long shot. Still, she had to tell Seth what she found.

“Thanks.” She shot from her seat and took the photograph from the waitress. “Could I borrow this for a second? I promise I’ll put it back once I’m done, and I’ll be extra careful with it.”

“Thank you,” Natti repeated. “I’ll be right back, promise.”

She ran for the door, hardly able to wait to tell Seth. He probably would shrug it off and say it’s nothing, but she didn’t care. She felt as if she was one step closer to solving the puzzle. However, when she pushed open the entrance door and stepped into the parking lot, all her excitement and glee vanished in an instant. Her eyes filled with tears when they fell on Seth, who had pinned the waitress—Alison—to the side of a white truck. His body sandwiched her while her fingers were tangled in his hair. Their lips so close, they looked about to kiss. Alison was speaking to Seth in what looked like shaky whispers. She even moaned, brushing her leg up against Seth’s thigh while her hands stroked and caressed his neck.

During her high school years, Kelsey Ketch could always be found tucked away in a little corner of the hall or classroom, writing her fantasy worlds and creating illustrations and maps.

Today is no different, except now she’s writing in the break room at her office building or at the tables of the Barnes and Noble Café in Cary, North Carolina. She is also an avid reader, a part-time book blogger at Ketch’s Book Nook, and lives with her two orange tabbies and awesome and humorous flat-mate.

Daughter of Isis is her debut novel.

For more information, please visit her site at kelseyketch.com.

thanks for the giveaway! >:D<
love the idea of the book, and the cover. :D

His eyes are incredible. I love that blue. And I love cover because it's so beautiful! By the way, Seth O'Keefe it's on my list of bad-good-sexy characters from books. Interesting idea of book.

Oh those eyes are amazing! The Descendants of Isis is a really cool adventure series. I loved both books!

great cover, and thank you for hosting, and thanks for the giveaway book looks great

I had my eyes on the first book awhile ago and this one sounds and looks just as good!!! Thank you so much for being a part of the tour and the chance to win!!

I love Egypt related books!
The story is very interesting and the cover is beautiful, Seth's HOT! Thank you so much for the chance to win! What an awesome giveaway! ^_^

This is the first series/book I've read involving Egyptian Mythology.Not that I believe in Mythology but I find very interesting.Really weird side note: I first learned about Egyptian Mythology on Stargate,I can't think about Ra or the Eye of Ra without thinking about Stargate.Anyway,let's talk Seth. So in Daughter of Isis he a bad boy hottie but I really love him in Son of Set.He's my favorite kinda bad boy,you know the kind: acted tough and bad but there's some sweetness inside him that he's fighting to let out while he tries to defeat the beast inside.I bet before you finish Son of Set you'll have the song "Demons" by Imagine Dragons running through your head.So describes Seth:
"I wanna hide the truth
I wanna shelter you
But with the beast inside
There’s nowhere we can hide"

Your eyes, they shine so bright
I wanna save that light
I can't escape this now
Unless you show me how"