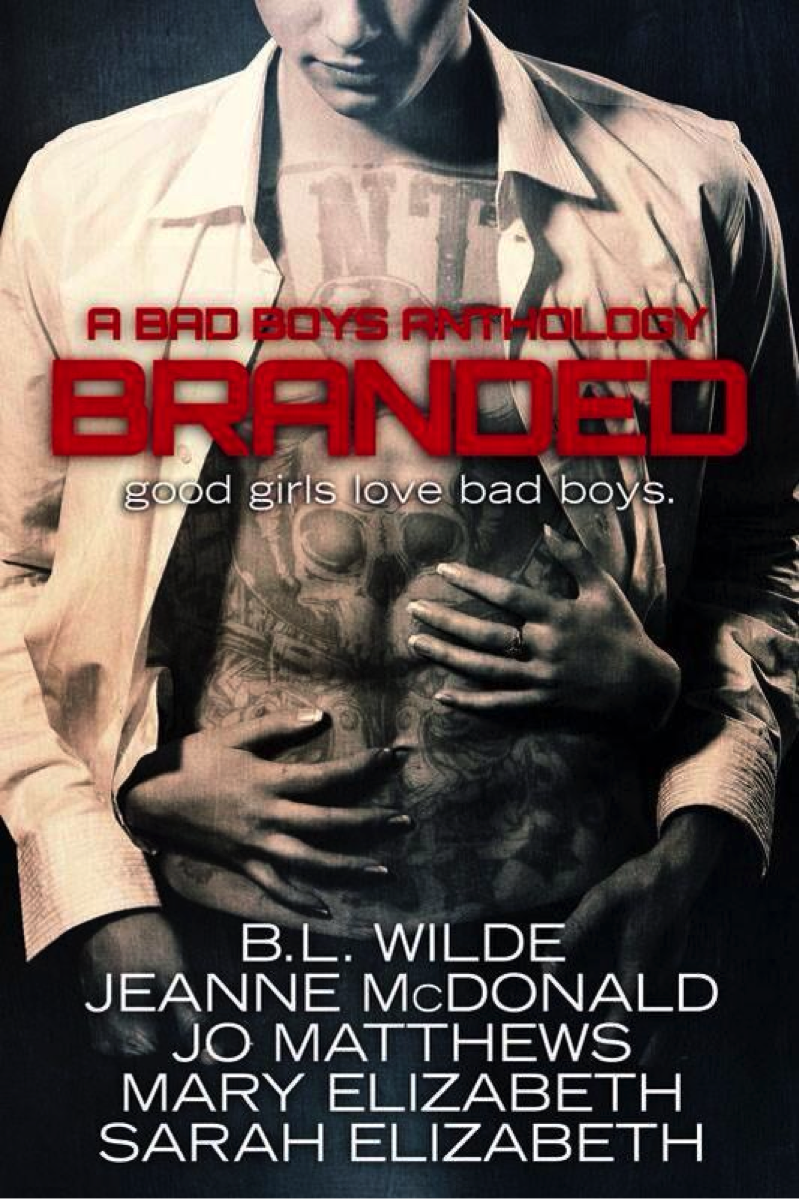 B.L. Wilde, Jeanne McDonald, Jo Matthews, Mary Elizabeth, and Sarah Elizabeth give us five good reasons why good girls love bad boys. The men of Branded are sexy, adventurous, and troubled deep into their souls. There may be no redeeming them, but at the risk of losing everything, these good girls must decide if loving their bad boy is indeed worth the cost.

Condemned by B.L.Wilde
Ten years served for a crime he didn’t commit. Ten years to lose everything he ever knew. Finally released from prison, Clayton McGuire is on a mission and nothing will stand in his way. He is determined to get revenge against the gang that set him up and take back what was stolen from him all those years ago.

Clay will stop at nothing to win back his honor and the heart of the only woman he has ever loved. Will she take him back when he finds her? Or will he be condemned to live a life without his soulmate?

Renegade by Jeanne McDonald
A chance meeting between a rookie cop and a common criminal who’s searching for a way out.
An unforeseen circumstance. An instant attraction. A magnetic connection.
Tattooed, pierced, and foul-mouthed, she can’t help but be drawn to him.
Two people entirely wrong for one another, yet so perfectly right.
When their worlds collide, Lucy Diamond will learn the true meaning of love and sacrifice as she embarks on the road of no return with bad boy Jude Wallace.
Like a thief in the night, love will take them both by surprise.

Desolation By Jo Matthews
Liam Jenkins grew up with everything he ever wanted. At age 17, his world is ripped apart and he finds himself without a home, without a car, and without money. His support system is gone and he is left to fend for himself. Not having any other option, Liam turns to sex and small crimes to survive.

When a beautiful woman chooses not to turn him into the cops but invites him to her hotel room instead, Liam’s world is flipped upside down again and everything he’s learned on the streets ceases to exist.

What will happen when one night with her isn’t enough? When she haunts his thoughts and dreams? When his past finally catches up with him, will he be able to start over? And will his mystery woman be there to see him through?

Don't Let Me Go By Sarah Elizabeth
Based almost entirely on body language, intimate feelings can develop within less than a minute of meeting someone.
Additionally, meeting in a dangerous situation increases the chances of falling in love.
This is that fall.
Where meeting her eyes means seeing it through.
Following down from the start to don’t let me go.
From roll up to run.
Between old glory and new beginnings.
This is what happens when a lamb is carried to the slaughter by courage, instead of a cowardly lion.

B.L. Wilde is a British author obsessed with many things, including heated love stories. Fully supported by her husband, she can often be found at her desk working on her next project.

Her journey into the world of erotica began when she started writing online stories over three years ago, and she hasn't looked back since.


Jeanne McDonald began telling stories at the ripe young age of five, when her mother considered the truth to be a lie due to her extensive embellishment to the retelling of an event. She wrote her first short story when she was twelve years old, and at the age of sixteen she tried her hand at poetry. She reconnected with her love for writing in 2010 thanks to the encouragement of a dear friend.

Her passions include a "mild" Starbucks addiction, music, reading, quotes, movies, and romance. When she's not spending time with her family, she can be found reading, writing, chatting with her friends or diligently working toward her bachelor's degree in Speech Pathology and Audiology. A proud Texan, Jeanne currently resides in the Dallas/Fort Worth area with her family.


Jo Matthews is an Arizona native, where she lives with son. A stay-at-home mom since 2007, she only recently discovered her love and passion for the written word. When she’s not writing, she’s usually knee deep in editing—an aspect she thoroughly enjoys.

As an editor, she has propelled quite a few authors into the published world, and with her skills, has landed several stories on Amazon’s Top Sellers lists.


Sarah Elizabeth love’s listener is a lone wolf born a unicorn with a red panda soul and a heart she drew herself. friend, sister, elizabeth, and true love, she’s a messenger that makes art with words and love with art. she’s been yelly, yellowglue, squeak, cuppycakes, precious pinks, warren, little grey, a girl named ben, and sarahbear. she’s a synesthete, a heart junkie, a truth seeker and secret keeper. poet half, sun half, and total scripturient, Sarah’s work is equal parts her passion, sanctuary, precipice, vice, adventure, restorative, deliverance, and joy. she currently resides in Kansas City, and she’s bringing Rococo back.


Mary Elizabeth is an up and coming author who finds words in chaos, writing stories about the skeletons hanging in your closets. Known as The Realist, she is one half of The Elizabeths—a duo brave enough to never hide the truth. Born and raised in Southern California, she’s a wife, mother of four beautiful children, and dog tamer to one enthusiastic Pit Bull and a prissy Chihuahua. She’s a hairstylist by day but contemporary fiction, new adult author by night. Mary can often be found finger twirling her hair and chewing on a stick of licorice while writing and rewriting a sentence over and over until it’s perfect. She discovered her talent for tale-telling accidentally, but literature is in her chokehold. And she’s not letting go until every story is told.


Cover Reveal organized by Written Elegance
Posted by CCAM at 8:30 AM