Running away from home was never Chloe Kowalski’s plan. Neither was ending up the target of killers, or having her body change in unusual ways. She only wanted a vacation, someplace far from her crazy parents and their irrational fear of water. 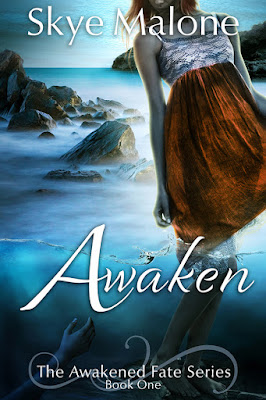 Running away from home was never Chloe Kowalski’s plan. Neither was ending up the target of killers, or having her body change in unusual ways. She only wanted a vacation, someplace far from her crazy parents and their irrational fear of water. She only wanted to do something normal for once, and maybe get to know her best friend’s hot stepbrother a bit better at the same time.

But the first day she goes out on the ocean, strange things start to happen. Dangerous things that should be impossible. Things to which ‘normal’ doesn’t even begin to apply.

Now madmen are hunting her. A mysterious guy with glowing blue eyes is following her. And her best friend’s stepbrother seems to be hiding secrets all his own.

It was supposed to be a vacation. It’s turning out to be a whole lot more.

Maddox slowed the boat, killed the engine, and then lowered the anchor. At least a mile off, the shore was a mosaic of green mountains and white buildings below. Puffs of clouds drifted over Santa Lucina, but out here, only the barest wisps hovered in the brilliant blue sky. Baylie leaned back on her seat, a smile on her face, while her dog just eyed the water as though trying to figure out how the demented humans could possibly think this was a good idea.

I smiled. My parents being so psychotic and all, we didn’t even have a bathtub in the house, just a stand-up shower the size of a broom closet. I’d never been able to teach myself how to hold my breath underwater, let alone swim.

But that was going to change, starting now.

“Well, um,” I began, feeling a bit reckless with excitement. “If you wouldn’t mind teaching me?”

“What the hell?” Maddox cried as the rest of us grabbed at the guardrails.

“Did we hit something?” Noah asked, scanning the water.

The ocean around the boat began to bubble and roil.

Noah swore. “Get us out of here!” he called to Maddox.

His brother didn’t need the encouragement. Quickly, he scrambled back toward the driver’s seat and turned the key in the ignition.

Shudders shook the boat, while all around, the ocean’s surface began to foam like the calm sea had suddenly become a boiling pot on a stove. Waves surged from every direction at once, growing more violent by the second, and on all sides the water darkened, as though a shadow was spreading below us.

No one could answer. As if shoved from beneath, the deck tipped up at a sharp angle and then just as quickly rocked back, wrenching us hard as we fought to hang onto the guardrails. The lurching came again, throwing us forward and back.

My grip broke. The metal rail hit me, knocking the air from my lungs.

And then came the water.

currently on sale for 99¢!!
Goodreads ** Amazon ** Barnes&Noble
GooglePlay ** iTunes ** Kobo
About the author:

Skye Malone is a fantasy and paranormal romance author, which means she spends most of her time not-quite-convinced that the magical things she imagines couldn't actually exist. A Midwestern girl who migrated to the Pacific Northwest, she dreams someday of travelling the world – though in the meantime she’ll take any story that whisks her off to a place where the fantastic lives inside the everyday. She loves strong and passionate characters, complex villains, and satisfying endings that stay with you long after the book is done. An inveterate writer, she can’t go a day without getting her hands on a keyboard, and can usually be found typing away while she listens to all the adventures unfolding in her head.

Skye also writes YA urban fantasy as Megan Joel Peterson and is the author of The Children and the Blood series.