a heroine for our times - Tor Maddox Series by Liz Coley

INTRODUCING Tor Maddox, a heroine for our times
“I know that one day, I’m going to have to live in the real world. I’d like it to be a decent one.” - Tor 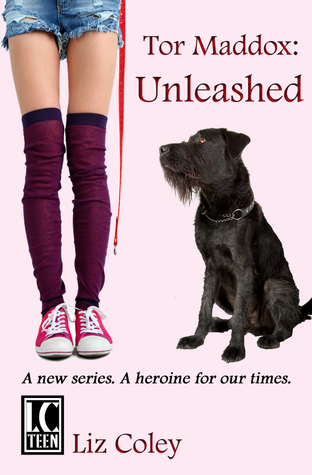 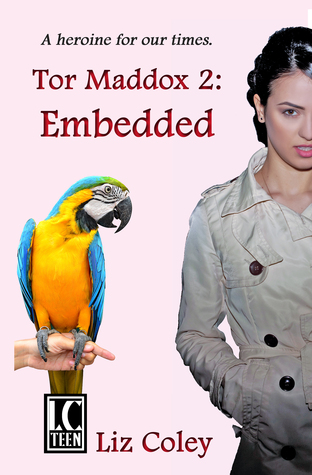 Book I Tor Maddox: Unleashed
When sixteen-year old Torrance Olivia Maddox, self-confessed news junkie, figures out that the mysterious and deadly New Flu is being spread by dogs, she has one question—if the danger is that obvious to her, why hasn’t the government revealed the truth and taken action?

Her search for the answer will take her farther than she ever imagined. But then again, she never imagined that man’s best friend could become public enemy number one, that men in black might show up in her cozy suburban neighborhood, that she’d spend her sixteenth birthday as a teenaged runaway, and that her effort to save one dog would become a mission to save them all.

Book 2 Tor Maddox: Embedded
Life has been way too quiet for Tor Maddox since her fifteen minutes of CNN fame. Then agent-in-training Rick Turner reappears with what sounds like a simple assignment—to embed herself as his eyes and ears in her own high school. When she agrees to keep tabs on high school state swim champ Hamilton Parker for the Feds, she is plunged into the deep end of a sinister plot. Knowing that freedom, justice, and lives are at stake again, Tor jumps in feet first, but has she gotten in over her head this time?

When observe and report becomes kiss and tell, Tor’s first mission may blow up in her face. 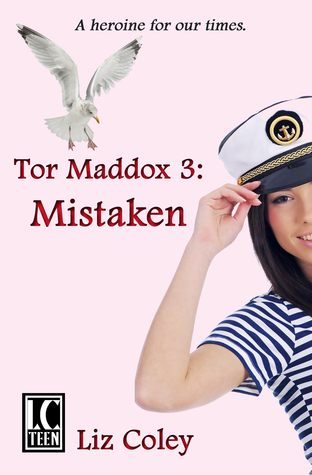 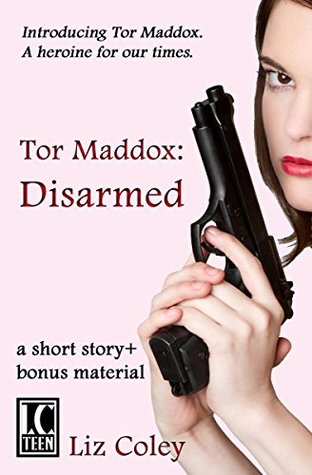 Eight leotards and a ball gown—that’s what Tor Maddox packed for her summer ballet intensive in New York. Pity she never arrived. Kidnapped once by the good guys and once by the bad ones, Tor finds herself involved in a high seas adventure featuring princesses and pirates, a wedding ring, and the guy she thought she’d never be allowed to see again, junior man-in-black Rick Turner.

It was spooky climbing down the slope under the dark trees. I bent low under the overhanging branches and walked east along the lowest part. Twigs tugged at my hair. Wisps of spider web caught my cheeks. Under cover of the slope, I dared to turn on the flashlight to scan the rocks underfoot. If I broke an ankle out here, I was nailed. Cocoa panted along beside me. I say panted, but there was a definite wheezy quality to it that made my own chest ache. We’d hardly gone any distance. He shouldn’t be tired yet.

When we were safely out of sight of houses and humanity, I found a less gravelly spot to collapse into at the base of a tree. Cocoa curled up against me, a nice warm body. Still, I put on a double layer of sweatshirts and opened up the mylar blanket to spread over both of us. I flipped the flashlight around in my hand, covering the clear plastic with my palm. The red glow was all the nightlight I thought safe.

Even with three layers of clothes and an insulating blanket, I shivered and shivered in the night. I was terrified that heat-seeking rattlesnakes would slither under the blanket with us. Terrified that spiders would drop out of the bushes. Terrified that Cocoa would take off after a wild rabbit. I was afraid of men in black suits. Afraid of men in white coats. And especially afraid of falling asleep. My eyes ached. Exhaustion battled with adrenaline.

At 5:15 a.m. all the batteries ran out, both mine and the flashlight’s. I slept, pursued in restless dreams by the vengeful spirits of barking dogs.

At 6:51 a warm, pink light penetrated the underbrush. A rising swell of birdsong served as alarm clock. At my stirring, Cocoa yawned and stretched. He lifted a leg against the tree I was leaning on and streamed against it.

Down? His puzzled eyes asked me. He knew it was time to stretch, time to play, time to go for his quick morning walk with Rody.

“Sorry, fuzzy face. We can’t. Have some breakfast.” I poured dog food into one bowl and water into the other, but Cocoa turned his head away, uninterested. “I guess you need a walk first. I’m sorry.” He whimpered softly.

“I hear you, bud. Me too.” I rolled my shoulders, stretched my legs out in front of me. Every square inch of my body hurt. The granola bars tempted me not.

What was going on at home this morning? By now, Rody would have discovered Cocoa was gone. Would he say anything?

Mom was probably wondering why she hadn’t heard the shower go on and off in my bathroom. Maybe she was knocking on my door right now, calling me to wake up. Maybe she was cracking open the door and walking over to the tousled lump of covers to run her hands softly through my hair and kiss me on the cheek. Maybe she was turning in horror from the empty bed, running through the house, calling to my Dad, crying, “She’s gone…she’s gone.”

My throat ached. I did that to her. A tear slipped out of the corner of my eye.

I pulled out my phone and sent her a text message: Mom I’m safe I’m fine don’t worry don’t search.
I hoped she could live with that. I doubted it.

I huddled with my dark thoughts as the sky brightened. In the distance, on the playground, toddlers laughed with their own mothers, enjoying their morning playtime before naps. A knife twisted in my heart. Life went on for the innocent as well as for the ignorant. But knowing what I knew, I could never be that carefree again.

Down the street, a door slammed. An engine revved.

Rick’s head whirled, tracking the noise, and I took advantage of the distraction to change the subject. “We’re going to Ensenada tomorrow,” I reported. “His dad has a business meeting, so we’re going along for the scenery. Okay? Enough progress?”

“That’s not what I was going to say,” I interrupted. Only a red belt, actually, but I wasn’t going to say that either. “It’ll be fine. His dad’s bodyguard is meeting us there. Besides. I’m just doing what you told me to. Get close to the son; keep an eye on the dad.”

He breathed loudly. “So you are. You’re right. You appear to be exceeding my expectations.”

He pulled a ball point pen out of his pocket. “Okay. Take this along with you. Please?”

“Wow. A pen. How…thoughtful?” I twirled it in my fingers.

“It’s a camera,” he explained.

“Really? Coolio.” I couldn’t stop the grin. My first spy camera! “But I do have my phone, you know.”
“This one is a little special. GPS tracking, voice recorder, infrared, and sixty megapixel image. No matter where you shoot from, we’ll be able to blow up the smallest corner of the shot.”
Awesome. “So what am I supposed to be shooting?”

“Use your judgment. The restaurant, the beach, anyone Parker senior talks to. That kind of thing. There are a couple safety features as well—flashlight, screamer, taser, death ray.”

I nearly dropped the pen. “Nice. How do I activate the death ray?”

A dimple appeared in his left cheek.
Spit. “You were kidding, right?”

His lips twisted in a smile. He flicked a moth from its perch on his sleeve. “Only half. This is last year’s model. No death ray.”

I punched him in the arm. “Sure. Whatever. Instructions?”

He passed me a small piece of paper from his other pocket. “When you’ve memorized this, please destroy it.”

I stuffed it in my pocket. “I’m terrible at manuals and on-line tutorials. Can you just show me?”
“Of course,” he said. “Though I find it hard to believe you’re terrible at anything.”

Rick spun me to face the street lamp, stepped up behind me, and reached around my shoulders to steady the pen. “That’s upside down,” he said. “Not that it really matters.”

I spun the pen point down. “I knew that.”

His hands closed over mine. “Site through the O in the brand name. See if you can center it on the light.”

Pulling the pen close enough to squint through it brought Rick’s thumbs right up against my cheek. I did my best to ignore the way I felt pressed, enfolded, snuggled even, between his warm chest behind me and his forearms resting on mine.

“See it now?” he asked. “I don’t think you’re aiming high enough.” He rested his chin on my left shoulder and tilted the pen. His eyelashes tickled my left cheek.

I forgot to breathe until he did it for me, the warm air blowing down my neck, more of a shuddery sigh than a normal exhalation. I melted and froze solid all in one moment. I knew if I turned my head about one inch to the left, I could create a whole lot of trouble for both of us. For just a millisecond, I calculated whether it was worth it.

Goodreads ** Amazon ** Barnes&Noble
About the authors:

In 2013, Liz Coley’s psychological thriller Pretty Girl-13 was released by HarperCollins in the US and UK. Foreign translations have been published in French, Spanish, German, Portuguese, Swedish, Norwegian, Russian, Czech, Slovakian, and Chinese (simplified and traditional).

Her independent publications include alternate history/time travel/romance Out of Xibalba and teen thrillers in the new Tor Maddox series: UNLEASHED, EMBEDDED, and MISTAKEN. Her short fiction has appeared in Cosmos Magazine and several speculative fiction anthologies: The Last Man, More Scary Kisses, Strange Worlds, Flights of Fiction, You’re not Alone, and Winter's Regret.

Liz lives in Ohio, where she is surrounded by a fantastic community of writers, beaten regularly by better tennis players, uplifted by her choir, supported by her husband, teased by her teenaged daughter, cheered from afar by her two older sons, and adorned with hair by her cats Tiger, Pippin, and Merry.

I'd like to give this set to my niece. I think she'd really like the premise since she is starting high school this fall :)

Go for it Jan ; )
If she Kindles or uses a Kindle app, you can get the whole series and short story for <$10. And If she likes the touch of books, so much the better! - Liz