a means to their own ends - Catalyst by Casey L. Bond

The city of Confidence is surrounded by a thick, concrete wall. These walls are built to protect those within and to keep dangers outside. What happens when the only danger to the citizens within is its leadership? 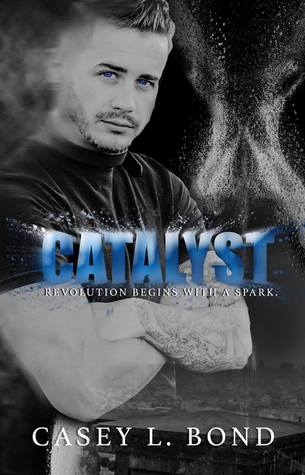 The city of Confidence is surrounded by a thick, concrete wall. These walls are built to protect those within and to keep dangers outside. What happens when the only danger to the citizens within is its leadership?

When a young man on a suicide mission meets a young woman with a terminal illness, both of them use one another as a means to their own ends. They never expect to become friends. They never expect to become so much more to each other. Their backgrounds and the secrets they uncover are more dangerous than any plans they could make together or separately.

Revolution begins with a spark.

"This is the fabulous tale of people who refused to let the powers that be control their lives. Win, lose or draw, they had to try! Catalyst is a full-length novel that can stand alone or be read as the prequel to the Harvest Saga, which is the BEST YA dystopian romance series I've read in a long time!!! Either way, I just have one word to describe this story... Catalyst was SQUEEEEEEE-MAZING!" - Goodreads, Wendy 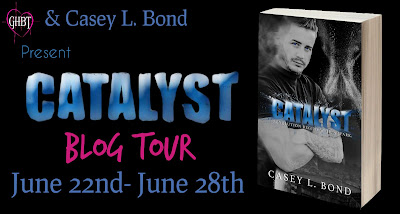 
Enoch slowed the car, scanning the surroundings meticulously. My eyes caught movement. A dark figure crouched behind some nearby bushes that were too thin to hide him. Enoch had taken notice, too. He stopped the car and jumped out of the vehicle, raising his stunner.

I’d never seen one used on a person before. Sitting up straighter to get a better look, I watched as the dark figure jumped up and tried to run. Despite his exertions wasted on me, soldier Enoch was fast, too. Hot on the figure’s heels, the soldier launched the stunner’s probes. When they connected, every muscle in the assailant’s body seized and locked up tight. The man stopped short, and Enoch tackled him, removing the probes from the back of the man he’d just tackled.

My fingers and face were pressed against the hot glass of the window.

My goodness. That was intense.

I watched as Soldier Enoch winced and gritted his teeth as he hefted the other man’s weight and dragged the limp form toward the car. He didn’t put the assailant in the front seat and I almost fell out onto my face when the door beside me was wrenched open. He was going to put him in the back seat! With me! I scooted far to left, plastering myself against the opposite door.

“Can I get in the front?” My voice was shrill, but I couldn’t help it.

Enoch shoved the man down into the seat beside me and then began to maneuver his feet into the floorboard. “So you can run again? I don’t think so,” he grunted, still fighting with the man, whose muscles were beginning to work now. The man was trying to fighting back.

His clothes were weird. They were torn and dirty. His neck wouldn’t hold the weight of his head, so it dangled between his knees, obscuring his face. The door beside him slammed closed, locking us inside. There was a bullet-proof glass barrier between the front and back seats.

If I thought running had given my heart a workout, I was wrong. This was crazy! I tugged on the door handle, pulling hard when it wouldn’t open. “Don’t break it.”

The voice beside me was deep, rich and fluid. It stopped me. I released the handle and looked over. His head was eased back against the headrest, and he looked at me intently. “You’ll really piss him off if you break his ride.”

Blue eyes. The color of what I imagined the ocean looked like: Blue-green and crystal clear as water. Dark, shaggy hair framed his face. His jaw was square and peppered with dark stubble. He had holes in his ears, held open by round pieces of metal. Colorful tattoos covered one of his arms. I gasped, which made him chuckle.

Enoch started the engine and eased the car forward.

The guy sitting, literally stunned into submission beside me, was a scrub. And since they’d caught him in the city, he was as good as dead.

“What’s going on back there?” Soldier Enoch piped up, glancing from the rearview mirror to the road and back, as he drove forward down the same street on which the scrub had been apprehended.

“Calm down. Nothing’s going on.” The scrub’s voice was hypnotic. I couldn’t quit staring, but I kept my hand on the door handle. It wouldn’t do any good. It was locked, but it made me feel better somehow, like I was holding a metal rod that would ground any electricity he sent my way.

Soldier Enoch smiled at my seatmate smugly. “I’ll enjoy watching you hang, scrub.” He muttered some belittling remarks and I watched the scrub’s face distort into something frightening. The scrub flexed his fingers, one at a time, then all together. He was regaining feeling, regaining strength. It looked like he was ready to try something.

Enoch’s page began making static sounds and frantic voices came over the air at him. Taking advantage of the distraction, I scooted closer. When the scrub’s arm raised in Enoch’s direction, my fingers grazed his forearm. “They’ll kill you,” I whispered to him.

“I know.” He didn’t move away, just stared at my fingers on his skin. I pulled my hand back.

“Why did you risk it? Why come into the city?”

He stared back at me. “My brother is sick. He needs medicine or he won’t make it.”

There was a raw quality to his voice indicating that he was being honest. Now his brother would die, and so would he.

Enoch was still fussing with someone over the page. I looked back at the man sitting beside me. The scrub was pinching the bridge of his nose.

“Are you able to run?” I whispered.

“Are you? Have your muscles recovered?”

Soldier Enoch glanced up into the mirror again. When he was preoccupied with his page, the scrub leaned forward propping his elbows on his knees. He flexed his feet and arms, making the muscles ripple beneath the fabric. “Yeah. I’m good.” He looked sideways at me, giving me a smile. “Why?”

“Did you get the medicine you needed?” I whispered.

He nodded. He’d gotten it.

“When he unlocks the doors, run and don’t look back.” The scrub’s brows furrowed, almost meeting in the middle.

“What are you talking ab—”

“You’re kidding me!” Enoch jerked the wheel to the right and the car followed suit.

“I need help, please! The door won’t come open!” I frantically jerked on the door’s handle and panted dramatically, pounding my palm against the closed window. “Please!”

“I’m unlocking it!” Soldier Enoch yelled, throwing his door open and then clicking the button on his door to unlock mine.

He opened my door, and I dry heaved a few times, making it look real. Most times it would have been real, but I had vomited everything I’d eaten already—just outside the doctor’s office at the Medical Pavilion.

Soldier Enoch crouched down and awkwardly tried to pat my back. His city-issued, black leather boots shone in the bright sunshine that was still blazing over the land. The temperature outside had gotten cooler, but the landscape was now painted a vibrant gold.

Enoch wasn’t all bad, maybe. I regained my composure, accepting the handkerchief he offered. I wiped my eyes and then the corners of my mouth before blowing my nose and offering it back to him. He declined with a cringe that he tried to disguise with a smile, so I smiled sweetly at him.

When I looked over to where the scrub had been seated, his seat was empty and his door stood wide open. He’d gotten away. He was free, and his brother had a chance at life.

“Where’d he go?” Soldier Enoch screamed. Stomping around the back of the car, he proceeded to search the area meticulously. Twenty minutes later, he gave up. I should have left and walked home, but I was tired. I couldn’t do it, and Enoch would have gotten in trouble if he showed up without me, or if I showed up at home without an “escort.”

So I took pity on us both and stayed put, imagining and hoping that the scrub had made it over the wall and that his brother would make it, too.

Casey L. Bond resides in Milton, West Virginia with her husband and their two beautiful daughters. When she’s not busy being a domestic goddess and chasing her baby girls, she loves to write young adult and new adult fiction.

You can find more information about Bond’s books via the following links: