Tamara Carrington always felt different. One event in high school left her wondering if maybe she really was a freak, although she’d managed to leave that experience in the past—buried deep in her psyche. 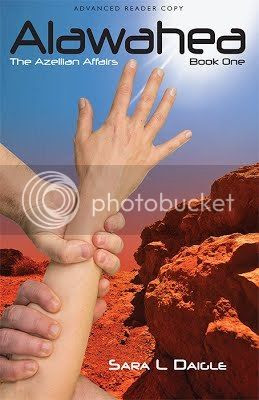 Tamara Carrington always felt different. One event in high school left her wondering if maybe she really was a freak, although she’d managed to leave that experience in the past—buried deep in her psyche. With the arrival of the exchange students from the planet of Azelle to her college, Tamara’s long buried memories threaten to erupt. As Tamara’s emotions build and her friendship with the Azellians grows, so does the knowledge of secrets within her own family.

With the deterioration of her mother’s health, Tamara doesn’t know where to turn for answers or solace. What has her family been hiding? Why does she feel inexplicably drawn to the Azellians? What will happen if she unleashes her long-suppressed passion? Will she survive or even recognize herself afterwards? Wanting answers, yet being afraid of what she might find, Tamara wonders if it would be better to remain asleep.

As they turned to comply, the ambassador walking away with them, Tamara studied the newcomers surreptitiously. The three young men and one young woman all had an air of comfortable confidence quite at odds with their new status here. The young man closest to her was a redhead. His features, even in profile, were delicate and chiseled—his nose a fine, straight blade on his face as he leaned over the table in the far corner. He rested an ol­ive-skinned, tanned arm on the table, the muscles in his forearm etched in sharp relief by the pressure he exerted on his arm. Gen­erous lips pursed as he read the card in front of him. His broad shoulders and chest, well-defined under a white t-shirt with some type of writing on it that she could not see, tapered down to a nar­row waist and slender legs encased in light blue jeans.

The second young man leaned over the table facing her. San­dy-blond hair fell over a high forehead into amber brown eyes as he read—a slight frown between them. His features were much heavier than his companion’s, with a slightly too-long nose and a jaw that was almost too strong. A good four or five inches shorter than the redhead, his dark blue t-shirt stretched across a well-muscled chest that, despite being stocky, had no spare fat on it at all. As he wrote on the card with his left hand, she observed that he was less tanned than the redhead. He nevertheless bore the same basic olive complexion. The dark-haired young man next to him nudged him and said something she couldn’t hear. The one who spoke suddenly grinned—his wide, generous mouth flashing straight white teeth. Black hair fell into his blue eyes, and he tossed his head, catching Tamara’s expression as she looked at them. He winked and returned his attention to the table in front of him.

Not wanting to get caught staring, Tamara looked away. Af­ter a few minutes, she snuck another peek at him. His face re­minded her of someone’s, but she couldn’t place where she’d seen those features before. Relatively small and straight, his nose had a slight flare to the nostril. His jaw was fairly prominent, making his face look long. The generous mouth softened the hard, mascu­line features of his face. He wore a vividly colored t-shirt tucked into a pair of long safari shorts. His thighs were quite heavy and muscular. His upper body was broad and unfinished looking, a little more muscular than the redhead but not as stocky as the blond. Her eyes traveled around the table to the young woman. The same height as the blond, she bent over the table with her back to Tamara. She had wavy brown hair that was cut in an at­tractive, shoulder-length bob and swept behind one delicate ear as she bent over the paper. Tamara couldn’t see her features from that position, but her lithe, slender body looked athletic.

Tamara’s cautious regard swept on to the final member of the group. Standing at the head of the table, the ambassador leaned forward to answer a question posed by the woman. His expression intent on what the young woman was saying, Tamara got the op­portunity to study him more closely. Taller than the other young men, the ambassador in his suit revealed less of his body structure than their jeans, t-shirts, and shorts. She had a moment of disap­pointment. Then, as if he noticed her attention, the ambassador looked up, caught her looking at him, and dodged around the desk to come up to her. Hastily, Tamara dropped her eyes to her desk as he approached, feeling the furious blush crawl up her face.

“You are a student here?” he asked in that musical voice.

Tamara looked up, her cheeks burning. She had a hard time meeting his eyes but forced herself to do so anyway. “Yes. Uh, my name is Tamara Carrington.”

The ambassador leaned against the desk. “Carrington? Would you be any relation to James Carrington?”

“Ah, this is wonderful! We in the diplomatic corps know Am­bassador Carrington well.” He paused, then continued, “Was? Is he not still alive?”

Tamara ducked her head. “He passed away a few years ago.”

“I’m sorry to hear that.” The ambassador straightened and bowed to her, placing his hand on his chest as he did so. “He was well respected on Azelle. We knew he had been ill, but we had no idea he had actually transitioned.” He rested his hands on her desk. Leaning forward, those dark eyes appeared intent on her. He gave her a charming grin that might have even melted her grandmother’s cold heart. “Well now. Do you mind if I ask what you are majoring in?” Usually feeling fairly secure in herself, she wondered why she was suddenly blushing.

Tamara swallowed hard as she tried to regain her compo­sure—and her ability to speak. “I am, uh, in diplomatic studies. Or I will be when I declare my major this year.”

His grin widened, and he looked at her from under thick lash­es. “Any specific planet you might be interested in?”

Dizziness assailed her as she struggled to remain calm. An odd pressure built behind her eyes and she lifted her hand un­consciously to rub the bridge of her nose. “Azelle is, um, inter­esting. I know more about it than my teacher does sometimes, mainly because my grandfather used to share stories with me. All the other planets are really great, too. I really like learning about other places. I’m not positive I want to be a diplomat like he was, but I do want to learn about other cultures and planets, and diplo studies is the best place to do that.”

The pressure vanished abruptly just as it edged into pain. “Would you be willing to come to the embassy for a welcome party for these students tonight? It would give you an opportunity to mingle with embassy members and get you prepared for a possible diplomatic career.” One side of his mouth lifted higher than the other as his voice took on an almost wheedling tone. “I can also get you access to other diplomatic embassies. I have several contacts in both the Atheran and Dorbin embassies.”

Tamara hesitated only briefly. “Sure, that would be great! I’ll come to the party tonight.”

He straightened. “Seven o’clock, in the main lobby. Bring any of your friends too who you think might be interested in diplo­matic studies.”

Tamara blinked. A slight headache throbbed between her eyes. She managed to ignore it as the young woman stepped up to the desk carrying the eight cards. She smiled at Tamara. “Thank you. Here are the cards you asked us to complete.” The words flowed out of her mouth more heavily accented than the ambas­sador’s, although with the same musical lilt.

Tamara smiled back and collected her thoughts. “Now you need to go to the Dean of Students’ office and get your room as­signments.”

The five Azellians left and the room suddenly seemed empty, as if there had been a lot more than just their bodies in the room. Ta­mara shivered, her head pounding. She flipped through the cards, reading the personal information listed there as she tried to figure out which was which. The only one she successfully identified was the woman, Mellis, since she was obviously the only female in the group. If Tamara attended the welcome party that night, she was sure she’d be introduced to the others—Greg, Justern, and Alar­in—and learn who was who. Pushing aside her curiosity, Tamara focused on entering the data into the computer and tried not to wonder more about them. She’d probably get the chance to find out more, if she actually took the ambassador up on his invitation.

As soon as the five of them walked out of the office, Mer­ran reached out to Greg on his private level so he could converse with him telepathically without the others hearing. Did you pick up that she sensed me?

I caught that she was becoming rather uncomfortable. I think you were hurting her. As a Healer, with a highly specialized sensi­tivity to others’ suffering, Greg often could tell things about peo­ple that everyone else missed. Is that even possible? Do humans even have psi?

Theoretically, yes, they do. We talked about it a little bit in my training. I’m surprised Healers don’t talk about this in theirs.

Healers aren’t exactly all that interested in humans … as you know … considering the challenges I faced getting permission to come here. Back to Tamara Carrington. What did you pick up?

She was open on the surface, but her deeper levels are heavily screened by a very thick shield. When I pressed on it, it resisted me with surprising force.

I don’t know. I haven’t run into a human with psi before. Wheth­er they normally have it or not, Tamara certainly has a shield, at least on the deeper levels.

Greg was silent for a moment. Shielded, huh? So, you actually think she’s psi?

Sure, why not? I think she very well could be.

Hmm. Maybe I should keep an eye on her.

Merran glanced at him. Is she giving off a Call? He had been friends with Greg long enough to know the Healer responded to things that Merran himself couldn’t sense, but that those some­times odd decisions and directions were important.

Not really. I just have a gut feeling.

I’m not one to argue with a Healer’s gut feelings. Go for it.

Heads up, humans headed this way, Alarin sent on the public level, bringing their attention back to the group. Three women walked past them, laughing and talking, casting an admiring glance at the group of Azellians.

Sara L Daigle has been creating stories since she first forayed into the world of writing at the age of eight. As an avid reader, growing up in a small town without much access to a library, and before the birth of the Internet, Sara devoured her mother’s extensive stack of science fiction and romance novels to keep her literary thirst quenched. Soon afterwards, she began writing her own stories and entertaining her friends by composing plays for them to act out.

A passionate interest in astronomy, anthropology, and linguistics, coupled with this early background in science fiction and romance, led Sara to merge the two fields and create a series of interlinked stories built around a fictional planet’s culture and its interaction with ours.

Sara currently lives in Denver, Colorado, with her husband and three very loving but energetic dogs.