Love is all you need... Really? - Anticipation: A Hearts & Handcuffs Anthology by Lindsay Cross and Megan Mitcham

Love is all you need... Really? Tell that to her unattended lady-boner. Sure, she and her husband had a love so strong it shouldered the weight of children, careers, in-laws, and out-laws, but the zing of excitement had grown into comfortable expectation. 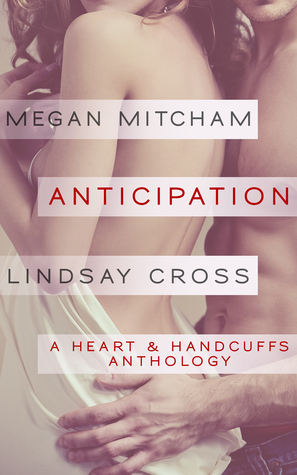 Love is all you need... Really? Tell that to her unattended lady-boner. Sure, she and her husband had a love so strong it shouldered the weight of children, careers, in-laws, and out-laws, but the zing of excitement had grown into comfortable expectation.

He knew things had gone to hell in handcuffs. Work choked him on files and felons. Home’s honey-do lists weren't much better, because nowhere on the to-do list did it say, “wife.”

They had love, but how did they get back to lust?

With a little bit of Anticipation…

Anticipation contains two sizzling ten-thousand word short stories. In Megan Mitcham’s story “Climax,” a busty—and brainy—redhead arrests her police-chief husband and shows him exactly what she’s had to do to get by without him for the last two months. In Lindsay Cross’s story “Need,” a work-from-home mom pushed to the brink pushes back, revealing her un-sated desire and forcing her Dominant to reestablish his role.

“What the hell were you thinking?”

David stalked forward. Dark sweatpants and a hoodie hid his narrow waist. His normally close-cropped blond hair hung as shaggy as his beard. He’d transformed into someone she didn’t recognize. Someone his undercover work created.

A dangerous cop turned criminal loomed over her. Not her husband. Not the father to their children. Not a part of their family.

He was a stranger.

“I’m sorry, are you speaking to me?” Lori knew her words would piss him off, but didn’t care. She welcomed anything more than indifference.

“Who the hell else would I be talking to? The goddamn trash fairy? I know you put that garbage behind my car. You knew I wouldn’t see it.” His steel-grey eyes burned liquid silver. In ten years of marriage and two children, waves of anger had never rolled off him as they did now.

“Well if you’d bothered to do what you said you'd do three days ago, you wouldn’t be in this mess. I asked you to take out the garbage. You said you would. You failed to comply. So I did it for you.”

David roared and slammed a fist into the cabinet beside her head. Lori pulled back. The first inkling of anxiety edged into her haze of anger. “Now I have to ride to work in a car covered in trash. I’m not cleaning that shit up. I’ll let it rot before I pick up your mess.”

Lori sat her coffee cup down and straightened. She yanked her robe tighter, as if the flimsy silk offered any protection. On the outside, she remained calm. Collected. Inside she trembled. Hurt and anger competed for dominance. “That's exactly what I'd expect from you.”

The anger won out. She narrowed her eyes. David’s chest heaved, but he stepped back. “I’m used to doing everything by myself. Cooking. Cleaning. Climaxing.”

“Why’d you insist on coming with me? This isn’t exactly your thing.” Lindley held up a gloved hand and fanned her fingers at him.

Fox’s broad back faced her. He typed furiously on his cell with the thick collar of his overcoat up on both sides. “What? Oh.” He turned his dark gaze on her. The ruddiness in his cheeks from the spring wind outside faded to sheet-white. “Damnit, Lin.” He looked away so quickly he almost snapped his neck. “I still don’t understand how it’s your thing.” He shoved the phone inside his pocket and gripped the table he leaned against with both hands. “When we met you seemed so normal.”

“I am normal.” She grinned, pleased with herself for shaking him up enough to get him talking. He’d been so quiet on the car ride over, stuck in the mire of his thoughts. And now that she’d seen the tip of the proverbial iceberg that had wrecked their sex life she wanted to know more.

“You have brains all over your gloves and you’re not about to hurl. That’s not normal.” His shaggier-than-usual locks moved in time with his shaking head.

“Sure it is. You like to solve puzzles. It’s part of the reason you became a police officer. Every case for you is an intricate weave of timelines, witnesses, evidence, leads, and documentation. Well, I like to tell people’s stories when they can’t.”

“This bastard got shot in the head.”

Fox’s shoulders shook. He doubled over and the most glorious sound filled her morgue. She hadn’t heard his laugh in so very long. Sure he’d laughed with the kids, but not with her, not that real belly-rolling laugh, in too long. He buried his face in his arm. “Oh God, it smells awful in here.” The coat and thickly-corded muscles muffled the words.

Lindley let the sound wash over her, soothing the ache in her heart. “It’s good to hear you laugh,” she breathed through the thin face mask.

“It’s good to laugh. It’s been a long time.” With that, the last of his mirth dried up.

“The logical thing for James to do is run, but why’d he kill White in my office, in my chair? Nothing was stolen. Nothing was out of place.” He resumed his grip on the table.

A tiny tendril of fear threaded itself around her heart. She strived to make light of the situation. But really, a man who’d eaten barbeque in her back yard had murdered the buddy he’d picked up on his way to their house. She could only blow off so much.

Lindley secured the metal spreader inside White’s entry wound and wiggled her fingers into his brain matter. “Why would he threaten you?”

“I pushed for the bust on Chino and his gang based on things we learned from following White and James.”

“Chino!” The tendril coiled tight and her fingers slipped off the tip of the metal slug.

“He’s not a problem for us. He knows how the system works. He’s a bad guy, but not The Godfather make-a-big-statement type. He’ll post bail within the hour. Whether he goes to jail or not, James is the one with the issue. He won’t have a prayer of showing his face in this town again. No matter what he says, Chino will believe he informed for us, and he’ll end up fish food.”

“And that’s not a statement?”

“James stealing the money was an FU to the force. White in my office was personal.”

Lindley pushed everything aside, concentrated, and steeled her grip. “I found the slug.”

“Can you grab me a small evidence bag and open it?”

He sighed and moved to the wall of metal cabinets and drawers behind her. “Can you bring it over here. If I don’t see the body, I’ll do better.”

“I still don’t understand how you made it through seven years as a detective.” Lindley sidled up next to him and dropped the hunk of compressed metal into the open bag.

“I could look at that as evidence. This is like finger painting or sculpting with brains, and guts, and… Okay, I’m about to gross myself out.”

It was her turn to laugh. Finally. Fox’s wide eyes and reciprocating smile said he enjoyed the sound as much as she did. They shared a moment together. He moved in, but his gaze dropped to her hands. He hit the brakes.

“I have to clean him up, and then me. It’ll take another hour, maybe.”

Fox looked at her extra-large clock on the wall. “One o’clock. I’ve officially been awake for thirty hours.”

“Sissy. It doesn’t get good until you’ve hit the fiftieth. Mental function shuts down and you find you can sleep standing up with a candy-bar hanging out of your mouth.”

“If this place didn’t freak me out so much, I’d already be asleep. You know I like my eight hours.”

“I know you haven’t gotten that many in a row in a while.”

“I haven’t gotten a lot of things in a while.” His shaky finger brushed a group of stray hairs from her forehead. “I’m sorry.”

“Not as sorry as I am.” She leaned into his hand. The tiny bit of skin-on-skin contact bolstered her resolve.

Goodreads ** Amazon
About the authors:
Megan Mitcham  was born and raised among the live oaks and shrimp boats of the Mississippi Gulf Coast, where her enormous family still calls home. She attended college at the University of Southern Mississippi where she received a bachelor’s degree in curriculum, instruction, and special education. For several years Megan worked as a teacher in Mississippi. She married and moved to South Carolina and worked for an international non-profit organization as an instructor and co-director.

In 2009 Megan fell in love with books. Until then, books had been a source for research or the topic of tests. But one day she read Mercy by Julie Garwood. And Oh Mercy, she was hooked!


Lindsay Cross was born and raised in the deep south along the Mississippi River. She discovered her passion for books in elementary school, picked up her first romance novel as a teenager and never looked back. She still lives in the south with her supportive husband, two daughters and a precocious Great Dane.


After graduating with her doctorate and a successful career, Cross rediscovered her love of reading and writing romance. In her spare time, you will find her with a set of headphones and her computer, writing hot romantic suspense with a southern twist.

Thanks so much for hosting us!!

I really enjoyed reading the excerpt!

I enjoyed the excerpt, and have added this book to my book wishlist.

I love that these two "stories" can merge to make a great read. :)

These sound like fun reads. I like that they're couples trying to get the spark back. Most of the books I read are couples just getting together and are enjoying the honey-moon phase, so these are a nice change :)

two books in one. bonus! LOL. Thanks for hosting.

Looks great. Thanks for the giveaway. Congratulations to Megan and Lindsay on the new release.

Love the cover and excerpt