before it is too late - Alien Love by Stan Schatt

In Stan Schatt’s latest Science Fiction novel, a dying astronaut reveals a secret that blows the lid on a government treaty with extraterrestrials while other alien races have come to Earth with their own agendas. Meanwhile an ancient alien race with a base on the Moon makes plans that could spell doom. 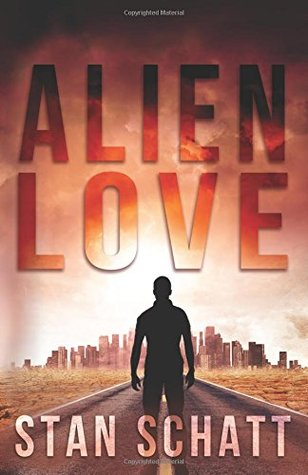 In Stan Schatt’s latest Science Fiction novel, a dying astronaut reveals a secret that blows the lid on a government treaty with extraterrestrials while other alien races have come to Earth with their own agendas. Meanwhile an ancient alien race with a base on the Moon makes plans that could spell doom.

25 year- old EX-SEAL, Jack Starling, has plenty of his own problems, but he can’t help falling in love with the beautiful woman he rescues after she is brutally attacked. He learns how dangerous it can be to fall in love with someone who is not human who has her own plans for him.

Jack finds himself pitted against aliens far stronger and far more cunning than any human enemies. Once he learns what the aliens have planned for him and for Earth, he must race against time before it is too late.

One of the major premises of Alien Love is that extraterrestrials have already made contact with humanity. I know that probably strikes some readers as bizarre, but consider, if you will, some reasons why this might be the case. I’m not even talking about ancient aliens, the notion that aliens visited this planet eons ago and were confused with angels and devils. Let’s leave that notion to Chariots of the Gods fans. I spent many years as a futurist and technology analyst with responsibility for taking untold amounts of data and trying to find patterns and make sense of it. I was right most of the time as evidenced by my rise to very senior management.

For decades there have been rumors about Dulce, New Mexico. Why? The rumors persist that our government has a secret facility there far underground where it works with extraterrestrials who have signed a treaty with us. If you scour the Internet, you’ll find all kinds of admissions by people with military backgrounds who swear they were part of this cover up. Recently a former Obama administration official lamented that he hadn’t pushed hard enough to encourage the president to release data on UFOs. The ex-official ended his remarks with a reference to the X-Files. Maybe the truth would set us free.

While Dulce remains a major topic on the Internet, there also are innumerable references to ex-astronauts who claim they saw alien activity on our Moon and that we were warned to stay away. It is interesting that all Earth governments have turned their attention to other celestial bodies while ignoring the much closer Moon. My Prologue to Alien Moon describes an ex-astronaut who finally admits the truth. I would not be surprised to hear such comments in the near future as our former astronauts age and have little to still fear from our government.

Finally, a think tank report many years ago cautioned the government that the admission that extraterrestrials exist would cause rioting in the streets, particularly by evangelicals who could not accept the idea that God created such creatures and that humanity might not be God’s favorite species. If you think for a moment about the cinema trend in recent years, it is to present more favorable views of extraterrestrials even though it is far easier to make a science fiction movie with evil aliens. Also, NASA recently has issued statements that the agency expects to find intelligent life within the next decade. I sense an attempt to soften people’s fears of the unknown. In other words, the climate towards extraterrestrials is changing just as the climate towards gays and gay marriage changed over the past half century.

Think contact with extraterrestrials is an absurd idea? When I researched my non-fiction book on that topic (Extraterrestrials: First Contact), I discovered that many very serious scientists are forced on the topic of first contact. Interest in the scientific community has grown exponentially in the past few years. Maybe they know something we don’t.

Dr. Stan Schatt spent many years as a futurist responsible for forecasting future technology products and markets for Fortune 500 companies. He served as a Fulbright Professor and taught at Tokyo University, USC, and the University of Houston. He is the author of over thirty books ranging from science fiction and paranormal mysteries to young adult novels. Schatt is a technology expert who has been quoted in the New York Times, Fortune, and BusinessWeek as well as CNBC.

Thanks for hosting Stan with us today. Appreciate you!