anything is possible - Granting Wishes (Kindling Flames #5) by Julie Wetzel

18+ “Traditionally, when you catch a leprechaun, they have to barter for their release.” A wry smirk slipped across his face. “And since I couldn’t stop the magic from settling, it looks like I’m going to be held to that tradition. It’s just turned into your lucky day. You get three wishes. Now, what do you want?”

Or that’s what Cathren has always believed, but a chance encounter changes everything. When she saves a handsome stranger from a nasty electrical shock, not only does he claim to be one, but he also insists on granting her wishes.

Now she must decide— is he insane, or a magical creature of lore? Unsure which is true, she grabs at the first three wishes she can think of: true love, happiness, and waffles. A tall order for most men, but not for Patrick Brogan.

With a little persistence and just a touch of magic, anything is possible.

Cathren came over to stand next to Patrick. “Please,” she begged. “Just stop this.”

Patrick turned to her. “I can’t.” Taking up her hand, he pressed it to his chest again. “I am sworn to grant your wishes.” His fingers spun the gold chain still wrapped around Cathren’s arm. “I have never failed before, and I will not fail in this.” He studied her face for a moment.

“Patrick…” Cathren said, exasperated. She needed to put her foot down or he would never stop throwing men at her.

“Have dinner with me,” he said, cutting her protests off.

“What?” she asked, shocked.

“This evening. Have dinner with me,” he begged again. “I think I know why the people I’ve picked haven’t worked out.”

“I don’t know you well enough. I could take you out and get you those waffles.” He pressed her hand into his chest harder. “Please.”

Cathren shook her head in amusement. It was hard to tell him no when he got that look on his face. “All right.” Even with him throwing random men at her, she always found Patrick’s company pleasant.

A smile lit his face, and he pulled her in for a hug.

She stiffened in surprise.

“Thank you,” he whispered right next to her ear.

Cathren couldn’t help but notice how solid he was as he squeezed her against him. “You’re welcome.” She relaxed in his grip. Her arms moved up his back, and she melted into his embrace. He was warm and felt so right wrapped around her.

“I’ll pick you up after work.” The way his voice vibrated through her set her insides quivering. They pulled apart slightly as he leaned back to look down at her.

Cathren’s eyes latched onto his lips. They were sensual and full. For just a moment, she wondered what they would feel like pressed against hers. The urge to rise up and claim them raced through her. Their eyes met, and she could almost see the same thought rush through him. A pang of desire hit her, melting her insides.

“Well.” Patrick shifted his grip on her and stepped away, breaking their contact. “I’ll see you later.” He patted her on the upper arms and was out the door before she could say anything to stop him.

Cathren staggered at the sudden lack of warmth and support. She gasped at her uncontrolled feelings. It took her a few moments of standing there to straighten her mind up enough to go back to organizing her buttons. Realization smacked her in the head as she shifted the pins around. She hadn’t found anything in common with any of the guys he had brought her, because she found Patrick more interesting than all of them. 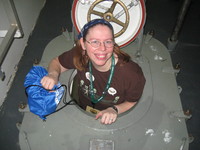 Originally from Ohio, Julie always dreamed of a job in science. Either shooting for the stars or delving into the mysteries of volcanoes. But, life never leads where you expect. In 2007, she moved to Mississippi to be with her significant other.

Now a mother of a hyperactive red headed boy, what time she’s not chasing down dirty socks and unsticking toys from the ceiling is spent crafting worlds readers can get lost it. Julie is a self-proclaimed bibliophile and lover of big words. She likes hiking, frogs, interesting earrings, and a plethora of other fun things.