13+THE EARTH GIVES WAY TO THE SEA,
THE SEA BOWS BEFORE THE WIND,
THE WIND FEEDS THE FLAME,
THE FLAME BURNS THE WORLD OF MAN DOWN TO THE EARTH.

THE EARTH GIVES WAY TO THE SEA,
THE SEA BOWS BEFORE THE WIND,
THE WIND FEEDS THE FLAME,
THE FLAME BURNS THE WORLD OF MAN DOWN TO THE EARTH.

The Fire Elemental has risen and its followers, the Fire Caste, have destroyed the planet. Humanity hangs on the cusp of extinction; their only hope now lies with the troubled Wind Warrior, Xander Sirocco.

Xander has absorbed the power of the Wind and Water Elementals but at great personal cost. Finding Sammy has been his anchor through the chaos around him, but now he finds himself wondering if saving her is enough.

Sammy remains a prisoner of the Fire Elemental, her mind trapped, as the dragon possesses her body. Her love for Xander keeps her going, but will her passion be enough to stop the Elemental from killing Xander once and for all?

It’s a race against time between Xander and the dragon to claim the last of the Elemental power and bring an end to a war that’s spanned millennia.

Earth God is the exciting conclusion to the bestselling and award-winning World Aflame series. 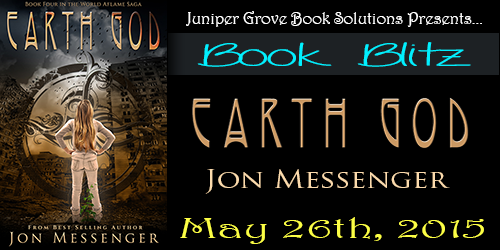 What if there was a previous dominant species that we replaced after they screwed it up?”

Jessica arched her eyebrows. “You’re not going to bring up the dinosaurs, are you?”

“Yes, the dinosaurs, exactly! Think about it. The whole world started off with Pangaea, one super continent where all the dinosaurs lived. Then, boom, all of this sudden something happens and wipes them all out. Scientists keep saying it was probably a meteor, but what if it wasn’t? Think about it. What would a meteor have done to the planet? Set it on fire? Filled the sky with ash to choke out most other life? Doesn’t that sound exactly like something the Fire Elemental would do?”

“I’m impressed you know about Pangaea. But it doesn’t change the fact that if I didn’t know you better, I’d say you were a giant stoner.”

“The Earth Elemental could have easily made Pangaea for the dinosaurs,” Sean continued as though he hadn’t heard her. “After they screwed it up somehow, the Fire Elemental wipes them out, the Earth Elemental splits the continent, and they start over, only this time with primitive mankind. It makes sense.”

Jessica pinched the bridge of his nose. “I want to tell you that none of that makes sense, but we just held a conversation with an Easter Island head before Xander become the embodiment of the Earth itself. Anything’s possible at this point.”

“Do you think they ever tried a Xander before?”

Sean glanced away from the blond and stared across the ocean. “They must have had Warriors for each of the elements. The fact that a Velociraptor Fire Warrior is a pretty badass mental image notwithstanding, do you think they tried this before? Creating someone who can stop the cycle?”

“Because they failed,” Sean said bluntly. He turned back toward his girlfriend. “If they tried it, they failed because the dinosaurs were wiped out. I just keep thinking that we’re not taking this seriously enough, and I know that’s ironic coming from me. I keep worrying that the Fire Elemental is just sitting back laughing right now, knowing that it kicked the crap out of a Sarcosuchus Water Elemental once before and is about to do the same to Xander.”

“I think by this point we’re all taking this seriously,” Jessica said. “Just because you’re joking doesn’t mean you’re not; we’ve known each other long enough to know it’s just your defense mechanism.”

They sat in silence, watching the lapping waves and trying not to see the lava pouring into the ocean not far away. It was peaceful, sitting on a deserted island in the middle of the Pacific. It was easy to ignore the fact that the world was coming to an end. Sean mentally noted Easter Island as a place to visit, once this was all over.

For a moment, he merely arched an eyebrow before he started snickering. Sean couldn’t help but laugh at the absurdity of the thought. They both laughed until their sides hurt. It felt good just to laugh for no particular reason, to forget about the insanity of their lives for just a moment.

Jon Messenger (Born 1979 in London, England) serves as an United States Army Major in the Medical Service Corps. Jon wrote his first science fiction trilogy in 2008 and has since written and published over 10 novels. The scope of his writing has expanded beyond science fiction to include the New Adult and Steampunk genres. His books have become Amazon bestsellers, been translated into foreign languages, and have won numerous awards both for content and covers.