In the beginning, she feared him - Fear II by Amarie Avant

18+ Luxury’s only desire is to love Victor, a man that cannot love her. In the beginning, she feared him. Mysterious and dark, Victor’s cerulean eyes hypnotize Luxury’s mind and command the drumming of her heart. 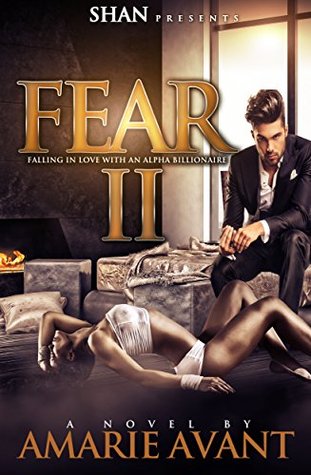 Luxury’s only desire is to love Victor, a man that cannot love her. In the beginning, she feared him. Mysterious and dark, Victor’s cerulean eyes hypnotize Luxury’s mind and command the drumming of her heart. Now the Duke of Arlington owns her. Victor will keep Lux to the dismay of Her Majesty, The Queen.

As the palace echos with footsteps, the English dare to whisper the horrid truths.

Suspense crescendos along with the intoxication of sex.

The beast has made it clear who she belongs to and how much of him he will allow: Money. Sex. Nothing more.

Luxury Whitson’s words are a dose of adrenaline, burning through my veins. While my breathing fogs out on such a crisp, cold Arlington morning, I am on fire. My fist beats against the towering doors of the grey stonewall estate. The flesh of my callused knuckles become torn and bloody.

Finally, the door cracks open and Lake Russell yawns. His pasty white ass is dressed in dingy boxers and a white undershirt. He’s in a daze, unaware that his life is marked.

I hastily unbutton diamond cufflinks and tug up the sleeves of my black blazer. My gaze connects with his as I calculate the fight.

His green eyes widen as he becomes more cognizant. “Duke, it’s five a.m.! What are you doing here?”

I throw a fist at his right eye.

“You barmy arsehole!” Lake stammers. “I will inform Her Majesty the Queen of this!”

His soft voice has always been an aggravation. The power punch to Lake’s stomach shuts him down. Though his abdomen is flat, no muscles provide Lake with protection. The air expels from his lungs. Lake is at a loss of equilibrium. He reaches out for the table next to the door. A marble horse statue crashes to the floor as he steadies himself.

There’s a rustling upstairs. My heart stops for a second as a female voice says, “Lake, what’s happening?”

This addition only triggers me to continue. I lean down before Lake. Grabbing his collar with my left hand, I bash his face with a right. My mind sullies with all the times he had flirted with Luxury. Whilebeating him to a bloody pulp, I’m infused with energy.

I thrive off the splatter of blood.

Hands-on murder has always been enticing. It takes a keen desire to enjoy the feel of pounding at a person’s flesh. It provides much more of a personal connection that pulling the fucking trigger. Though Lake’s eyes roll back in his head, I can only fathom that his emerald gaze once held what was mine. Desired what belongs to me.

And then a redhead with creamy white skin approaches the top of the banister. She’s covered in linen. “Duke- Duke, I beg of you! Please stop!”

Her voice drowns out.

Her pleas mean nothing.

I become alive as my knuckles numb from pounding Lake’s mouth, eyes, forehead, and chin. My brain only registers one stream of thought: “The more I love you, the more I lose myself…”

What the bloody hell is that supposed to mean? I awoke to our large bed, void of Luxury’s sexy essence. All I have is a short letter, a note really.

Am I, a royal duke, not even deserving of a real letter?

Murder flashes before my aqua eyes. No matter how many times Luxury has said the word goodbye, she had no right to leave me.

Blood splatters across the sleeves of my blazer. I push them up. Damn near falling on top of Lake as I continue. I steady myself, as my legs are planted wide. My large thigh muscles press against the confines of a tailor-made pants.

Lake’s head thrashes with each hit.

This is not enough… The emotion. The feeling of being alive diminishes instantly. A thought hits me like a bolt of lightning. Lake is an unworthy opponent. I finally let go of his collar.

Lake falls instantly to the ground. He lies in a heap of piss and blood. The faint rise and fall of his chest is proof of life. My mind is overcome with Luxury. Those bloody words she had said. Then he moves. His long, slender hands grip the glossy wooden floors as he spits.

“B…bollocks! Y…you fu-fucking wanker!” Lake stutters. His tattered cheeks flush as he looks up at his woman. Age means nothing. Lake. Is. Not. A. Man. He slowly takes to his hands and knees, muttering, “Piss off!”

My next question is indicative that I’ve totally lost it. “Lake Russell, where the fuck is my lady?”

An obsession, often considered as my newest, most prized possession is missing. My Luxury Whitson is gone. And murdering a dear friend of the Queen means nothing at this moment.

He looks up, thin lips bruised and pressed in defiance. Lake stammers as I step toward him, “D’Ross, I… I don't know. I beg of you…”

Again, I punch at him. This time my hand is paused inches from his nose. Lake flinches. His eyes shut. I look over my shoulder to see the old man; my butler Burt has a hold on my arm.

It’s rare for me to function off of pure aggression. I should have noticed my butler’s arrival. He could have been a nemesis. Before Lux, I was calculating and cold. As a billionaire, money is my first thought. Emotion has no place in my royal lifestyle. My secret side-hobby as an assassin further erodes the little emotion I once had. Then I met Luxury Whitson…

Heartbroken and with murder still on my mind, I glare at Lake before heading outside.

My eyelid twitches as a memory of the voluptuous shape of a 4’11, cheeky lady with freckles and curly hair flashes before me.

“Well, Victor, now that we’ve just succeeded in commencing unnecessary chin-wagging, the Queen will be in an outrage–”

“Do not speak,” I command as we head back to my Aston.

Burt hates when I drive angry. He attempts to open the passenger door for me but I walk around to the driver’s side. “Duke of Arlington, I wouldn’t advise…”

“Exactly. You wouldn’t advise. I’ll let you know when your advice is welcomed.”

I get into the car and slam the driver’s side door. The exhaust roars to life. Before Burt adjusts in the passenger seat, I speed off. Through the haze of rage running through my veins, I know the truth:

Lake didn’t put a wedge between us.

No one in all of England could have stopped the way Luxury and I felt for each other. Not even my Queen.

None other than me has ruined us.

Mother of two. Wife of one alpha. And alpha to his alpha.
Lover of thrills and enticingly sexy chills.
Azusa Pacific University alumni where God comes first. This dyslexic and highly attention deficit author has received two Bachelors and a Masters in Counseling. Though sociopaths are very interesting, and coupon shopping is just as thrilling as action or cartoon movies, Amarie Avant has taken on romance.
Beware anytime you open an Amarie Avant novel: This is not your ordinary love story…