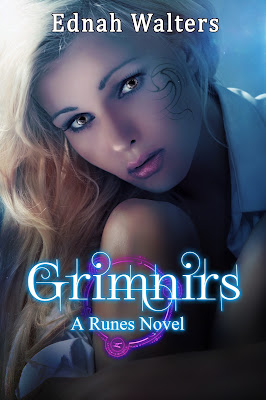 Straight out of the psyche ward, Cora just wants her life to be normal. She doesn’t want to see souls or the reapers collecting them. The love of her life, the guy she’s loved from a distance for years, has moved away without saying goodbye. So yes, she’s nursing a serious heartbreak. It’s no wonder love is the last thing on her mind when Echo storms into her life.

The chemistry between them is mind-blowing. The connection defies logic. It doesn’t help that Echo is the poster boy for everything she hates in a guy—hot, beautiful, and cocky. A general pain-in-the-butt. Being around him makes her feel more alive than she’s ever felt before. But more important, the souls leave her alone when he is around.

Echo is perfect for her. Echo might even be her soul-mate. There is only one problem. Echo is a freaking soul reaper. A Grimnir. The very beings she wants out of her life. Maybe normal is overrated because Cora wants it all. Answers. Love. A life. You see, once you fall for a Grimnir, your life will never be the same again.
Goodreads ** Smashwords ** Kobo 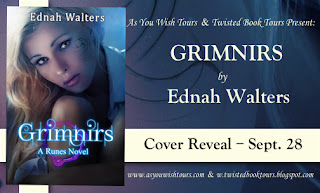 EDNAH WALTERS grew up reading Nancy Drew and the Hardy Boys and dreaming of one day writing her own stories. She is a stay-at-home mother of five humans and two American short-hair cats (one of which has ADHD) and a husband. When she is not writing, she’s at the gym doing Zumba or doing things with her family, reading, traveling or online chatting with fans.


Ednah is the author of The Guardian Legacy series, a YA fantasy series about children of the fallen angels, who fight demons and protect mankind. AWAKENED, the prequel was released by Pill Hill Press in September 2010 with rave reviews. BETRAYED, book one in the series was released by her new publisher Spencer Hill Press in June 2012 and HUNTED, the third installment, will be released April 2013. She’s working on the next book in the series, FORGOTTEN. Visit her at www.ednahwalters.com

Ednah also writes YA paranormal romance. RUNES is the first book in her new series. IMMORTALS is book 2. She is presently working on book 3, GRIMNIRS (Release date TBA). Read more about this series and the world she's created here www.runestheseries.com

Under the pseudonym E. B. Walters, Ednah writes contemporary romance. SLOW BURN, the first contemporary romance with suspense, was released in April 2011. It is the first book in the Fitzgerald family series. Since then she has published four more books in this series. She's presently working on book six. You can visit her online at or www.ebwalters.com.


Event organized by: Twisted Book Tours and More & As You Wish Tours
Banner Made by: Camelia Miron Skiba
Posted by CCAM at 10:30 AM

I like very much the covers with women on. This one is interesting and mysterious. Nice description!