Will a whirlwind winter romance result in a forever love? The Snowman’s Sweetheart by Shanna Hatfield

"Every book I read by Shanna Hatfield is filled with great characters, an awesome storyline and has always been an amazing read. This one was such a great read that I could not put it down and read it in one afternoon." Phylis, Goodreads 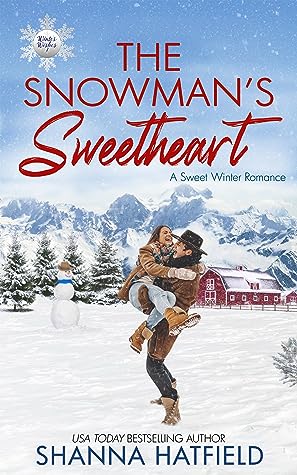 Description:
Published: January 27th, 2022
Will a whirlwind winter romance result in a forever love?
After a Christmas Eve catastrophe that left her heart encased in ice, Sierra Goodwin detests anything to do with winter and the holiday season. To take her mind off her troubles, her best friend talks her into a weekend spa getaway to a town she’s never heard of. Her bestie’s boyfriend tags along like a bumpy third wheel, and things go from bad to worse when they arrive in town to find a winter fest in full swing. Then Sierra runs into a handsome stranger, a man everyone calls Mr. Snowman, and discovers her heart might not be a frozen fortress after all.
Kylan Snow loves his life, his Christmas tree farm, and the town of Pinehill where he was raised. There’s nothing he enjoys more than a beautiful winter afternoon spent outside in the crisp, fresh air, or time spent with friends and family. When he unexpectedly encounters a dimple-cheeked woman in need of a little hope, he has no idea one weekend with her with completely alter his world.
Will their winter wishes for a forever sweetheart come true? Find out in this sweet romance brimming with laughter, snowmen, small-town charm, and love.
EXCERPT

As they reached the parking garage, Sierra followed Jenn over to her parking space, only to find Rob Kohl, Jenn’s boyfriend, waiting for them in his SUV.

“Hey, Sierra!” he said, hopping out and opening the back of the vehicle. “Isn’t this great?”

Sierra scowled at Jenn, furious she’d invited her boyfriend to join them for a weekend they’d been planning for months. “What, exactly, is going on?”

“Rob got time off from work, too, and is joining us,” Jenn said, practically squealing with joy.

Sierra had visions of spending the entire trip watching Jenn and Rob making lovey-dovey eyes and kissy-faces to each other. Although they were always good to include her in activities, she often felt like an unwanted third wheel when she was around them. She certainly didn’t need to feel that way on a vacation that was supposed to be a time for her and Jenn to relax and have fun.

She tossed the interloper a blistering scowl. “I’ll stay home. You two go.” She started backing away from the vehicle.

“No! You’re going,” Jenn said, handing her things to Rob, then grabbing Sierra’s arm before she could make an escape. “Rob surprised me this morning with the news he was free to go with us. I knew you’d do this, try to back out of it if you knew he was coming along, but you are going on this trip, and you are going to have fun!”

Rob chuckled. “You can’t force her to go or have fun, Miss Bossy.” He winked at Jenn, then looked at Sierra. “But we really do want you to go, Sierra. Please? I promise we’ll both be on our best behavior. If you refuse to go, then I’m the one who’ll stay behind.”

Sierra rolled her eyes. She wanted to refuse and storm off in a fit of anger, but Rob was truly a nice guy. And if he said he’d stay behind, he would, even if it was painfully obvious how much he wanted to go. She couldn’t very well march off in a snit after his offer to remain behind. Though she was disappointed her girls’ weekend with Jenn had just morphed into something entirely different.

About the author:
USA Today Bestselling Author Shanna Hatfield writes sweet romances rich with relatable characters, small town settings that feel like home, humor, and hope.
Her historical westerns have been described as “reminiscent of the era captured by Bonanza and The Virginian” while her contemporary works have been called “laugh-out-loud funny, and a little heart-pumping sexy without being explicit in any way.”
When this farm girl isn’t writing or indulging in rich, decadent chocolate, Shanna hangs out with her husband, lovingly known as Captain Cavedweller. She also experiments with recipes, snaps photos of her adorable nephew, and caters to the whims of a cranky cat named Drooley.
To learn more about Shanna or the books she writes, visit her website or find out more about her here:
Website * Goodreads * Facebook * Twitter * Instagram * Bookbub * LinkTree * Newsletter
Author's Giveaway
a Rafflecopter giveaway
Posted by CCAM at 12:28 PM