forced to fulfill an impossible role... The Defender by Larissa Soehn

"Great read! The best sci-fi novels have strong characters and The Defender certainly delivers. [...] Mix that with some great battle scenes and descriptions of alien worlds that came alive in my imagination, The Defender will not disappoint!"Mona J., Goodreads 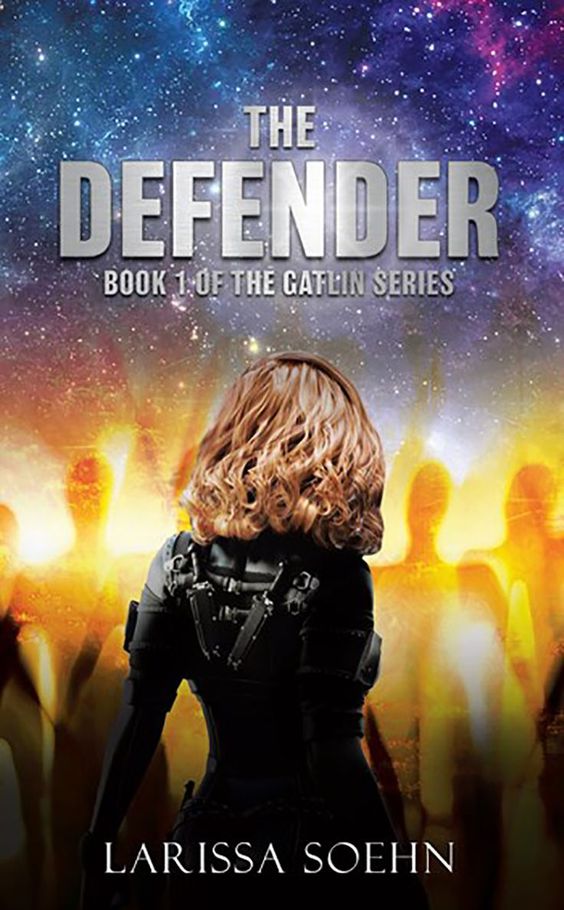 Description:
Published: November 2021
A woman battling depression and anxiety finds herself trapped in her own life, but when an alien device rips her away from Earth, she is forced to fulfill an impossible role and save the galaxies from destruction.
On Earth, Alexia Harmon is a mother and wife, but in a foreign galaxy, she is so much more. Torn away from her family, Alex is in an epic battle to escape from Gatlin and return to Earth. But little does Alex know, Gatlin is on the verge of destruction. The galaxy faces annihilation; a prophetic doom that was set in motion thousands of years ago.
Alex struggles to stay alive as she fights against an alien government that is trying to kill her, a species of genetically engineered creatures that are hell bent on her destruction, and the demons of her own mind that threaten to overthrow her. Join Alexia Harmon as she works to fulfill her role as THE DEFENDER.
GUEST POST
What Happened When Someone Called Me Creative… A Self Realization Story

Have you ever been told something about yourself that you think is just so strange, or something that you think doesn’t describe you at all? Well, that happened to me, and it may surprise you to know, that when someone called me creative, I thought they were crazy!

Ok, not entirely. I knew I liked to make crafts and build things with my hands, but to be called creative, that to me meant to be original. Everything I had done up until The Defender was about following a design or taking someone else’s idea and putting my own spin on it. I hadn’t done anything original before.

The answer is ‘Heck Yes It Is’! The more I thought about it, the more I realized that she might be right, I might be a creative person. Once I realized that, I had to stop and laugh at how ridiculous it was that I had never thought to call myself this before.

This level of self realization unlocked a whole new view to my own soul that I had never acknowledged before. Coming out of a major depressive episode meant doing a lot of self discoveries, and this one just fell nicely onto the pile of stuff I hadn’t realized about myself.

I want to unleash myself on the world, and that is a scary thing. Being a creative person means taking risks with your work and understanding that not everyone is going to like what you have done. This level of self exposure is almost harder than if I were to walk through a crowded room with no clothes on. Ok, I’m joking… kind of. But it is like bearing a piece of my soul for you all to read and judge. The Defender is a piece of my soul. It’s a view of a part of me that has always lain dormant, but now it is out there for you all to read and enjoy. Talk about scary!

So, this next part is important, be kind. Not just to me, but to all those that are bearing little piece of their soul to the world. We are putting our most treasured creations into your hands, so be gentle with them. If you don’t like them, then that’s ok, but don’t make someone cry. On the flip side, if you love it, tell them, for all that is good, TELL THEM! We need more positivity and kindness in this world.

EXCERPT
His hands drip with thick green blood. His fingers slide around inside the creature’s body, pulling, pushing, prodding. Finally, he finds what he is looking for, and with a sharp pull, he takes out the small object. He stares down at the tiny orb and marvels at it.
This will be the thing that ends them, rendering them powerless. The thought is vicious, but he has no time for kindness. Not now.
Quickly he turns and gently places the soft ball under a microscope. Staring into the lens, and using advanced medical tools, he prods at the centre of the ball, peeling away the outer shell. Inside is a thick, hard stone-like substance. Carefully he pulls it out. Cold radiates from it as if it could snatch all of the heat out of the room.
Careful to not drop or touch the substance, he swivels around and walks past the dead creature while moving to the second table.
Strapped here is a creature of nightmares. A long, lean body that will tower over all that it meets. Pincers adorn each appendage that will cut through anything it desires, and a face to leave the beings of the societies wetting themselves in fear.
He laughs lightly, looking over his creation with manic fondness. Carefully, he inserts the rocky substance into the cavity that has been carved open to receive the powerful object. The creature’s chest rises and falls lightly, supported by the machines that whir next to the table.
Stitching up the creature, he flicks a switch that pumps adrenalin into its massive system. It takes a few seconds, but the creature’s eyes fly open and look around aggressively.
The eyes looking back are human, but everything else is alien. The strongest parts of many species, all stitched together into one beautiful destroyer.
With one wild whoop, the creature activates its newest power, sucking all the heat from the room. The creator shivers and lunges for the control button. As the room starts to frost over and the air freezes, he presses the button, his fingers creaking as they bend against the cold that suddenly engulfs him.
With a violent spasm, the creature jerks madly on the table and is rendered temporarily useless. He smiles grimly. This is it; this will kill them all.
TOUR SCHEDULE
Goodreads ** Smashwords ** Amazon ** Barnes&Noble ** Apple

About the author:
Larissa Soehn is a budding new author from the cozy city of Red Deer, Alberta, where she lives with her husband, daughter, two cats and a dog. She started this journey as a recovery method for severe depression. She found that creative writing helped her process her emotions and work through the struggles of depression. As a child, Larissa enjoyed writing and telling stories, a passion that has recently reignited inside of her. Currently she is working to finalize the Gatlin Series, as well as publish a series of children's books to help families discuss the importance of mental health, amongst other social issues facing children today. Larissa is an advocate for mental health and uses her personal experiences to help others work through their struggles. She uses social media platforms to help spread her message and give people permission to speak up and speak out.
Website ** Goodreads ** Facebook ** Instagram
Author's Giveaway
the more you comment, the better your chances of winning
a Rafflecopter giveaway
Posted by CCAM at 1:36 PM

wow, if she didn't have anxiety before I am sure she has her fair share battling in a different galaxy. sounds like a terrific read.

A woman battling depression and anxiety - I find this so interesting.
Thank you for sharing this.

When did you first realize you wanted to be a writer?

What is your work schedule like when you're writing?

What, to you, are the most important elements of good writing?

What inspired the idea for your book?

I’m adding this to my to be read soon list.

If you could tell your younger writing self anything, what would it be?

When did you discover you have the gift of writing?

Where do you get your ideas for writing?

Do you reward yourself with something special when finishing a book?

Did you get a lot of encouragement when you decided to become an author?

Have you ever started a book that you decided not to finish?

Have a great week!

Do you have a favorite author and/or genre?

Did you have any writing schooling?

The opening sentence with the dripping green blood really catches the reader's attention. Love the cover too!

I’ve a project that I am just now working on, and I have been on the look out for such information. 먹튀검증

Thanks for sharing this blog. Eagle heart academy is the nonprofit organization which is connected with Granddaughter Crow who is an author of public speaker, teacher, medicine women, and intuitive reader. She was the  Best Spiritual healer in Canada with the member of Navajo Nation. She has Best Medicine Woman in Canada and USA.

Thanks for sharing this blog. Granddaughter Crow has Best Medicine Woman in Canada and USA. She was the Best Spiritual healer in Canada with the member of Navajo Nation. For more info visit our website.