love and guilt, grief and promise... - The Crossing by Ashby Jones

The Crossing is a powerful and haunting love story of surprising discovery set in Manhattan’s Hell’s Kitchen during Prohibition. Its mission seeks to reconcile love and guilt, grief and promise. Set apart from other stories, it combines history, fact, surrealism, and reality into an ever-recycling boost of the human spirit. 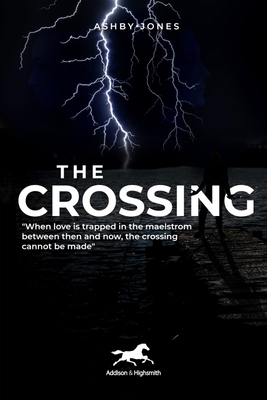 The Crossing is a powerful and haunting love story of surprising discovery set in Manhattan’s Hell’s Kitchen during Prohibition. Its mission seeks to reconcile love and guilt, grief and promise. Set apart from other stories, it combines history, fact, surrealism, and reality into an ever-recycling boost of the human spirit.

Irish-born Johnny Flynn, a former British soldier, is banished from his homeland and sent to America on a ship so riddled with disease that he realizes the voyage was meant to murder him. When he survives the trip, the captain forces him to walk the plank into the Hudson River. Miraculously, Johnny is rescued by a rumrunning Irish gang, the Swamp Angels, and given a job running whisky in Hell’s Kitchen just as Prohibition makes liquor a hugely profitable, dangerous business.

Fighting for his life and livelihood amid the denizens of the Manhattan piers, Johnny is plagued by the memory of his lost lover, Nora, whose father, the famed Irish revolutionary, James Connolly, met his death through a firing squad that included a reluctant gunman named Johnny Flynn. Nora’s last words to him, when she learned of his betrayal and left him, “I love you, Johnny Flynn”, echo in his heart, leaving him pulsing with guilt, yearning, and the hope that she might yet forgive him.

Johnny drinks hard. One night, drunk on the floor of Hailey’s speakeasy, he encounters a seeming apparition on stage, the ghostly Esme, an Irish singer who suffered unspeakable horrors at the hands of the British Black and Tans. Johnny is dazzled by her. She is not only a singer but a healer, teaching poor and afflicted children to sing and gather hope at an old theater called The Woebegone. From Esme Johnny learns how to overcome the desire for revenge, only to discover that she, too, clings to her own dark dream of retribution.

Hell’s Kitchen, Johnny discovers, is thronged with people whose damaged hearts ache for revenge, repentance and love. As he grapples with taking responsibility to help others resolve this overwhelming dilemma, he learns that Nora is coming to New York to advocate for Irish independence. As he confronts her and soon thereafter receives a piercing love letter from Esme, the story comes to a turbulent climax.

Roughly a mile from the Statue of Liberty, Johnny Flynn stood trembling on the bridge of the ship called The Pestilence. His hands were rope-bound at the wrists and a rucksack filled with heavy stones was strapped to his back. His executioner, seaman Bile, named for the Celtic god of Hell by Johnny’s long-gone friend and fellow prisoner, Seamus, had tried in vain to kill Johnny every day on this voyage from Ireland, and now he would have his way. The vessel from which Bile would send Johnny to his death was the recently recovered, ancient famine ship found in the Bay of Kinsale. The ship still contained the skeletons of the three hundred dead who’d tried to escape the Great Famine by taking passage to America but whose journey had been ended by typhus, cholera and tuberculosis. In hopes of hiding their humiliation, the Irish had returned The Pestilence to its parting pier unannounced and mothballed it in what soon became a drying, wooded alcove south of Kinsale, leaving the three hundred bodies to rot in the hold.

The ship was discovered by a group of young Irish campers shortly after the Treaty with the victorious Brits was signed, ending the War of Independence. Soon thereafter, in the fall of 1921, the Rebels filled the arid tributary with fresh water, freeing the ship and setting it on a crossing to America to test its sea-worthiness. The next step in purging their embarrassment for the deaths was to cleanse the ship’s hold of the bones and restore its ability to make money for the Emerald Isle.

Goodreads ** Amazon
About the author:
Ashby Jones has been writing historical novels for 50 years. With degrees in Literature and Clinical Psychology; Creative Writing at UCLA under the guidance of Leonardo Bercovici. Jones previously published: The Angel’s Lamp in 2017 which was well received and reviewed by the Irish Times. Jones’s passion is writing literary fiction that attempts to understand mankind’s never-ending battles with irony, tragedy, blatant contradiction, and the anomalies of love. Such is the focus of 'The Crossing', a stand-alone sequel to 'The Angel’s Lamp', his first novel. He studied under such notables as William Hoffman, a best-selling author, and years later at U.C.L.A. under Leonardo Bercovici, a highly regarded screenwriter.
Goodreads ** Twitter
Author's Giveaway
the more you comment, the better your chances of winning
a Rafflecopter giveaway
Posted by CCAM at 1:49 PM

the book sounds really good, it's on my tbr

I am blown away by what I have read about this book!

I love the historical aspect of the novel!

That bolt of lightening on the cover is powerful. Sounds like a good story.

we provide ac repair ,installation,and other service on door step in Chandigarh at very fair price .
ac repair service at low cost in chandigarh
our service is also available in other states too .

Thanks for nice information, please visit our web :
Adityo
Adityo