"I rarely give five stars but felt this author wrote a fine romance novel that I'd highly recommend to other readers." Cindy, Goodreads 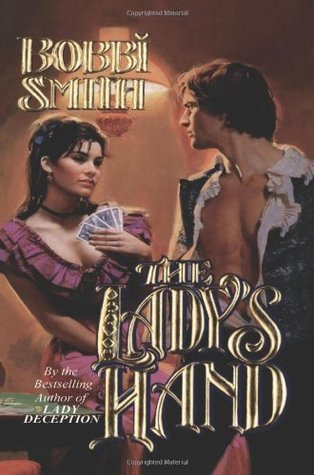 Description:
Unlucky At Cards…
Cool-headed and ravishingly beautiful, Brandy O’Neill knew how to hold her own with the riverboat gamblers on The Pride of New Orleans. But she met her match in Rafe Morgan when she bet everything she had on three queens and discovered the wealthy plantation owner had a far-from-gentlemanly notion of how she should make good on her wagers.
Lucky In Love…
Disillusioned with romance, Rafe wanted a child of his own to care for, without the complications of a woman to break his heart. Now, a full house had given him just the opportunity he was looking for – he would force the lovely cardsharp to marry him and give him a child before he’d set her free. But a hot wedding night and a glimpse into Brandy’s tender heart soon made Rafe realize he’d been luckier than he’d ever imagined when he won… The Lady’s Hand.
EXCERPT
When the knock came at Rafe’s door the next morning, he’d been expecting it. He’d been up since dawn, planning the way he was going to handle Brandy. He was certain she wouldn’t be able to get the five thousand she owed him and that would leave her right where he wanted her.
He opened the door to find Brandy standing there, looking every bit a lady.
“May I come in?” she asked.
He held the door open for her, then closed it behind her.
Brandy felt trapped, but maintained her stoic demeanor, revealing nothing of her inner turmoil. “I hoped you would be here.”
“I’ve been expecting you. Do you have the money?” He wasted no time on niceties. When Rafe knew what he wanted, he went after it.
She opened her purse and took out the money she’d brought with her.
For a moment, Rafe went still. He’d been sure he’d driven the stakes up high enough to bankrupt her. He’d felt certain that she didn’t have enough to pay the debt, and now…
“Here. There’s nearly fifteen hundred there. I’ll pay you the rest over the next few months.”
The uncertainty that had gripped him was gone in that moment, and Rafe knew he’d won. He smiled.
“That won’t do. When you made the bet, you said you were good for the money.”
“I am. Just give me time to make up the difference.”
“I’m not a bank, making loans.” His expression was hard. “Is there a problem getting the rest of the money now?”
“I only have this. Is there any kind of payment agreement we can arrange?”
“I had considered one option…”
Fear gripped her. She knew he was a ruthless man who took what they wanted and damn the consequences.
“Your option is?”
“I want you to marry me.”
Goodreads ** Amazon

About the author:
After working as a department manager for Famous-Barr, and briefly as a clerk at a bookstore, Bobbi gave up on career security and began writing. She sold her first book to Zebra in 1982.
Since then, Bobbi has written over 40 books and 6 novellas. To date, there are more than five million copies of her novels in print. She has been awarded the prestigious Romantic Times Storyteller Award and two Career Achievement Awards. Her books have appeared on the New York Times Best Seller List, the USA Today Best Seller List and the Wal-Mart Best Seller List.
The rights to Ms. Smith’s books have been sold to China, France, Germany, India, Israel, Russia and Sweden. Bobbi has also written two faith-based contemporary novels – Haven and Miracles – using the pseudonym Julie Marshall.
Website ** Goodreads
Author's Giveaway
the more you comment, the better your chances of winning
a Rafflecopter giveaway
Posted by CCAM at 1:18 PM

This sounds so good. I love the character name, Rafe

I liked the excerpt, thanks for sharing

Hi! I hope everybody enjoys The Lady's Hand.

This book looks so cool!

Good book for winter reading.
Thanks for the contest.

Do you listen to music when you write?

I really like the cover. Thanks for the giveaway!

What author do you most admire?

What do you use to write?

Sounds adorable! Love the story of how they get together - a card game!

I like the cover and excerpt. Thanks for sharing!

Gamblers in the Old West! Sounds exciting! I would love to take a paddle wheeler down the Mississippi.