What harm could there be? One Night with a Billionaire (Playboy Billionaire Club, #1) by Lane Hart

"What a story! [...] The banter, animosity, passion, and eventual friendship will keep you laughing throughout the story. There’s a twist and a secret I didn’t see coming, and I am looking forward to seeing what happens next in this series!" Coastie Mom, Goodreads 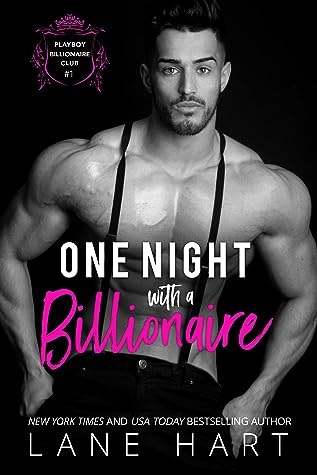 Description:
Published: January 28th, 2022
Billionaire Harrison Avery always gets what he wants, and as soon as he sees Siena Butler, he’s desperate to have her. Too bad Siena has sworn off all men, especially gorgeous arrogant ones. She wouldn’t date the sexy rich boy for even a million dollars, which is exactly what he offers her.
Harrison never meant to offend the beautiful beach shop cashier when he gave her a million-dollar check. He was just trying to get her attention. How could he have known that Siena was fed up with men and would use the check to try and ruin him.
When Harrison buys up the beach shop where Siena works to pay her back, her opinion of him isn’t improved. But the more time she spends with her new boss the harder it is to keep hating him.
Siena soon realizes that she can only resist the billionaire’s charm for so long. What harm could there be to let herself indulge in just one steamy night with the playboy?
EXCERPT

“Look, because of this stupid misunderstanding between us, my entire business is on the line. My name. My legacy. My actual damn job. Not to mention that there are hundreds of employees who could lose their jobs if a merger doesn’t happen soon. If nothing else, do it for them, not me! They’re just normal people with families, trying to make ends meet.”

Damn him for trying to turn this around on me. “How dare you come in here and try to make me feel like the bad guy, you self-entitled asshole!”

“You don’t know anything about me!” he exclaims.

“I know you’re a rich, entitled jerk who always gets whatever he wants when he wants it, which is apparently why you refuse to take no for an answer from me!”

“The check wasn’t me trying to buy sex! It was supposed to be like a big tip, you know like generous celebrities sometimes leave for waitresses,” he explains.

“I know that!” he shouts indignantly. “I’m just saying that’s how it was meant. Did I think it would help you change your mind about coming over last night? Yes. But there were no strings attached. You can still cash it.”

“No, I don’t want your money!” I tell him. Reaching into my shoulder bag, I find the check, ball it up and hit him in the chest with it before it falls to the floor.

He stares at me with his jaw gaping for several silent seconds, and then he chuckles. “You’re in the process of ruining my entire fucking life, and all I can think about standing here looking at you is that maybe my demise would be worth it just to spend a few more minutes arguing with you. How stupid is that?”

“Pretty damn stupid,” I agree, lowering my eyes and running my fingertip absently over the peeling edge of the counter to avoid looking at his confusing, handsome face.

About the author:
New York Times and USA Today bestselling author Lane Hart has more than forty steamy stories currently available on Amazon. Sign up for her newsletter to receive updates on new releases and free promotions by copying and pasting this link into your web browser: http://bit.ly/LHDBWNewsletter
Lane lives in North Carolina with her husband, author D.B. West, their two daughters, a few lazy cats and a pair of rambunctious Pomeranians. She has a Masters in Criminal Justice and spent ten years working as a paralegal for a criminal defense attorney before walking away to become a full-time writer.
In October 2015, the paranormal romance anthology Wicked After Dark, including her standalone, Let Him Reign, hit #13 on the New York Times bestseller list. Since then she's been climbing the Amazon charts with hot new releases. So whether you're looking for MMA superstars, hot cops, arrogant football players, sweet millionaires, or romantic weddings, there's a little bit of something for everyone.
Lane loves to hear from her readers on Facebook, Twitter, on her website, or by email lane.hart@hotmail.com!
Website ** Goodreads ** Twitter ** Facebook ** Instagram ** Newsletter
Author's Giveaway
a Rafflecopter giveaway
Posted by CCAM at 12:14 PM