"The writing is vivid. Gory moments made me wince. Battle scenes had me on the edge of my seat. The romantic moments (yes, there were one or two) had me smiling. The writing is so vivid, in fact, that everything takes on a personality. Even the weapons. Esha, Riella’s weapon, has a particularly poignant story behind its name.By the end of the book I knew the characters so well that I did not want it to end. Luckily for me, I hear that there’s a second Bloodforge book to come. " - Goodreads, Fiona 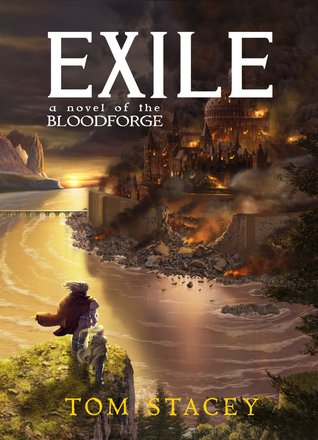 A gripping tale of heroism and the darkness within

On the fringes of the Verian Empire, two small boys stumble upon a strange altar, buried in the heart of a mountain. There they awaken a horror unseen for generations, that will descend upon the realm of men while it is at its weakest. For Veria is a nation at war with itself, only recently recovered from a bloody rebellion, and the time of heroes has passed. The empire is in a state of chaos, and while its ruler, the Empron Illis, rids the land of his remaining enemies, unseen forces are gathering at the borders. However all eyes are turned inwards. The Empron is not a well man, and there are whispers among the common folk that his advisors are spies; demons that only wear the flesh of men.

Yet there is hope...

In the distant mountains, a forester who has buried his past learns that he has not been forgotten, and that his crimes have sought him out at last. But he is no simple woodsman. He is Beccorban the Helhammer, Scourge, Burner and the Death of Nations, and his fury is a terrible thing.

For when all the heroes are gone, Veria will turn to those it has forgotten, before all is lost.

The Forester watched from the undergrowth as they torched his home. It hurt more than he had thought it would. The flames stretched towards the sky, licking the tops of the trees and turning the snow to rain before it could hit the ground. The crimson men had searched the hut and its surroundings for over an hour. With the weather closing in, their commander had ordered the small wooden building set aflame.
That was clever, thought the Forester. There was no way that all eight of them would have been able to ride out the coming storm in the hut. Instead of taking the comfort for himself as many commanders would, he had removed the temptation, replacing it with a large fire to sustain them all equally. That showed bravery. That showed leadership.
It would not save him.
The Forester slid back from his hiding place and blended in to the shadows. Snow was falling so thickly now that it was hard to see more than a few yards ahead. A peal of thunder crashed around the forest as if some god had stamped his foot to keep warm. Soon it would be dark and cold and terrifying as a man's imagination turned every shadow into a monster from a children's story. That was when they should have come, just like the Sons of Iss had. He had already discarded the notion that these were they. The Sons of Iss came dressed all in dark cloth with long sharp knives, not in plate armour. These were something less. Something he could deal with.
The Forester pulled his hood over his head, becoming a great ogre of dun fur and white ice that only resembled a man. He brought his breathing under control and took one last look at the glowing fire that marked the ashes of his memory, before disappearing into the growing shadows.
The wind began to howl.

Kiren leant in close to Huril, shielding himself from the biting wind. It seemed to be a living thing, screaming in his ears as its icy fingers searched for every gap and crevice. After burning down the small hut, Barin had ordered the men to huddle close. Only a few of the older men — about three of them — had brought furs. The rest sat frozen and miserable, every bit of exposed skin wrapped in whatever they could find. The Guide had disappeared an hour before, hissing something in Barin’s ear and then melting into the bushes like a shadow. It felt as if a weight had been lifted off of Kiren’s shoulders, but he did not know why.
Dreng returned from his scout with a brace of winter hares. Whilst the others ransacked the hut, the wiry tracker skinned and prepared his catch, storing the still warm meat in his pack and scraping the skins clean. He sat now opposite Kiren with the white furs wrapped around his hands, each pelt still tinged pink with gore. At any other time Kiren's stomach would have lurched at the thought of touching the oily, recently dead flesh, but now he glared at Dreng with jealous eyes as his own hands threatened to turn blue.
These few days in the mountains had been miserable. Now it seemed that they would all freeze to death, their mission a failure. They had been outfoxed by one old man who was probably somewhere warm and dry with a full belly. If this weather continued he would return home to eight living statues in compensation for the loss of his dwelling.
Barin stood away from the group, leaning against a tree with his cloak wrapped around him. Kiren wasn't sure whether the Lommocel was dead or not. It was hard to look in any one place for longer than a moment yet he wasn’t about to get up and check. The snow was flying sideways and stung his cheeks with its force. Kiren wanted to close his eyes but every time he did so he felt incredibly tired. Before the storm struck, Barin had given them a short speech about staying awake. To fall asleep in this cold was death, he had said, and he tasked every man with keeping his neighbour alert. Nevertheless, it was hard to keep the mind active when all there was to do was sit and wait. Kiren turned his head and looked at the men around him. All were so covered in snow that their crimson armour was frozen and powdered white. In fact it was hard to tell them apart.
“You still with me, boy?” Huril's gruff voice penetrated the fog of Kiren's thoughts.
“Still here,” he said and Huril grunted in response. Kiren had never been this close to the old soldier. He smelt of tobacco and sweat. Strangely he found that comforting. It reminded him of a tavern; the smell of woodsmoke, cooking grease and packed humanity. Somewhere warm.
He looked at the men around him one by one. Next to Huril there was Millar, the farmer's son turned recruit. Next to him sat Sarif Morn and then Shume and Dreng. Next to him was Grosh... was that Grosh? Yes, it must have been. Then... Shume. Kiren shook his head. He must have counted wrong. There was no mistaking that the figure to his left was Shume. He had been staring at the back and side of his face all day and knew every inch of that jowly expanse, even huddled as it was into a cloak. Who was the other figure, then? The Guide? No, he was far too broad to be the Guide. Besides, the Guide had left an hour ago. He had to have counted wrong.
Kiren slowly turned his head and stared at the large man between Sarif Morn and Dreng. He was one of the few who had brought furs, although they were caked in frost and snow. He sat hunkered down, staring at the ground, his hands hidden inside the folds of… what was that? A bearskin? Kiren carefully counted the party in his head. Barin, Morn, Dreng... Huril, Grosh, Millar, himself and Shume. Eight men.
But there were nine in this clearing.


Available on Kindle Unlimited
Goodreads ** Amazon ** Barnes&Noble
About the author:

I am from the wild lands of Essex, and have been all my life.

I've always been a student of history. My first history teacher at secondary school taught me that there are only five letters in the word history that matter: 'story.' Ever since then I've been hooked.

I'm somebody who loves to read. I love Bernard Cornwell's earlier works like the first Sharpe novels and the Warlord Chronicles. I've experienced the can't-put-down quality of Wilbur Smith's Courtney novels. I'm a big Conn Iggulden fan (Emperor and Conqueror series) and love A Song of Ice and Fire - who doesn't?

Arguably my favourite author is the late David Gemmell. His simple historical fantasies really struck a chord with me when I was younger, and encouraged me to write my own stories.

I like stories about heroes, or things that make you scared to turn the page, stories that leave you feeling empty or that you've left friends behind in the epilogue. A writer is someone who can reach out from a page of prose and grab your attention and not let go until your heart is beating faster or aching with loss.

If my own stories can make even one person feel something like that then I will consider myself a success. If they don't, I'm going to keep writing them anyway, so you might as well read one of them!