the opportunity - The Rose Bandit by Jay Mims

A series of burglaries have struck the sleepy town of West Falls. Seven homes have been burglarized, with only a single red rose left at each crime scene. The townspeople have dubbed this cat burglar the Rose Bandit. And Dan Landis, private investigator, has been hired to catch the thief. 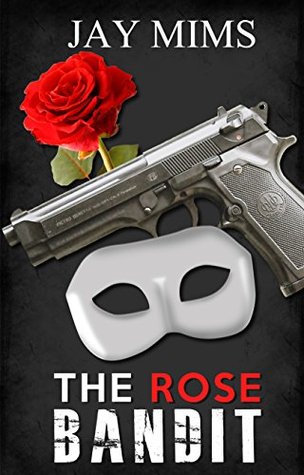 A series of burglaries have struck the sleepy town of West Falls. Seven homes have been burglarized, with only a single red rose left at each crime scene. The townspeople have dubbed this cat burglar the Rose Bandit. And Dan Landis, private investigator, has been hired to catch the thief.

Haunted by the ghost of his dead partner and an empty bank account, Dan jumps at the opportunity. But, when a body turns up at the Rose Bandit’s latest crime scene, Dan suspects there is more going on. He faces a dilemma: Catch the thief and make a quick buck, or prove that the Rose Bandit isn’t a killer.

Dan hated to be cryptic with a woman he wasn’t going to sleep with. Thankfully, Ursula hadn’t asked a lot of questions, and he’d had to tell no lies. Not that he could lie effectively to her, she just had that kind of face he knew he couldn’t fool. Still, she’d given him an address, and the kind of directions that only a florist would know. He was very good at following directions. All part of his natural charm, and the key to any good relationship.

“Not that they last long,” he admitted. The car was empty, except for Roger the Bear. The bear said nothing. “I always manage to screw things up somehow. You know, I do wonder if I’m my own worst enemy. Then again, I seem to be doing well currently. Right? What do you think?”

The miles stretched on. The bear said nothing. “Alright, I admit we both bring baggage to the relationship. But there’s no reason two adults can’t make it work, it’s all a matter of perspective.” He turned left at Fork Mills Road, and went over the Lawson Bridge, which apparently crossed over the Little Salkehatchie River. Dan hadn’t bothered to ask where the Big Salkehatchie River was. He passed the sign warning that the bridge would ice before the road. He never paid it much mind. Ursula had described the stately home of Harry Davidson as the brick house two doors down from the old Methodist church, across from the ball field. He had now seen five churches in the last mile and a half, no ball fields.

“Ah!” The car slowed as he neared a tennis court. Next to it was, definitively, a baseball diamond. Dan let out a sigh of relief. He also noted there was a cemetery and the kind of single room church Andy Griffith would have sung about. “It’s always nice when people give accurate directions.”

The house was indeed a single story brick. No car was in the driveway, though a massive tree was there. It had the kind of leaves usually reserved for banana trees, and his headlights illuminated funky looking pinecones. He put the car into park and took a moment to assess the situation. The smart thing would be to call for backup, sit quietly, and listen to the music of the night. As he got out of the car, he reminded himself what a terrible idea this was. He also pulled out his lock pick kit, which he kept in his back pocket for just such emergencies. While studying the lock, he leaned his hand against the doorknob. It twisted and the door opened.

“Well that’s not even trying,” Dan whispered. He slipped inside, closed the door behind him, and studied the house. It felt empty. He considered the darkness and wondered what the most dramatic place to hide would be. The floor creaked. He rolled his eyes. Finely honed investigative instincts. He kept his feet flat on the floor, and moved stealthily away from the windows, into the deepest shadow.

The floor creaked again, lumbering footsteps. He held his breath. Apparently this house had been broken into by Sasquatch. And he was now an accessory. Life was going swimmingly. As his eyes adjusted to the dark, he noted a figure pacing back and forth down the hallway, in the open bedroom. A light flicked on. Instinctively, he stepped deeper into shadow, his leg coming to a rest against a table. He was kind of surprised Mama Landis’ favorite bull in a china shop hadn’t knocked the thing over.

The light turned off. Dan began to wish he still had his gun. Another footstep, another creak, and he noted the figure was coming closer. And closer. His right leg was still touching the table; its height telling him it was an end table. He edged his left leg over, feeling a cloth of some sort. A chair or a couch. He slipped forward and around, coming to a seat as quiet as a cat in the chair. Recliner, very comfortable. He crossed one leg over the other, reached out with one hand for the lamp on the table, and hit the switch.

Time to play this my way.

The light came on with a crack. The figure in black jumped around. He noted the gun, a shotgun. That was annoying, but not wholly unexpected. The face turned to him, blinking several times, clearly caught off guard by the sudden light. Good. It was high time he took the initiative. He put on his Lady Killer 9000 smile, tilted his head, and in his friendliest tone said, “Good evening, glad you could make it.” 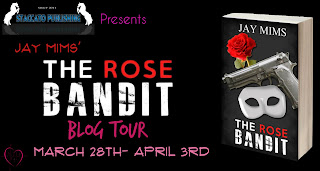 Jay Mims, better known as Mimsey, lives two miles past nowhere with The Mimsus.
He also accidentally adopted his neighbor’s cat, Eartha Kitty, has a lizard named Bob hiding in his house, and has a passive-aggressive Dalek roommate named Steve.
When not writing cozy mysteries, Jay teaches and is learning knitting.
Jay is currently working on knitting a cape. Capes are cool.