Give Us a Chance (The Wheeler Brothers #2) by Allie Everhart

Jake Wheeler doesn't date. He has a one and done rule. Some would say he's a player but he disagrees. He's always upfront with a girl, letting her know he's not interested in a relationship. That is until he meets Ivy. 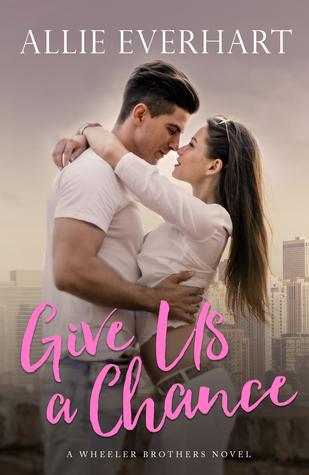 Jake Wheeler doesn't date. He has a one and done rule. Some would say he's a player but he disagrees. He's always upfront with a girl, letting her know he's not interested in a relationship. That is until he meets Ivy.

A talented carpenter who can hold her own on a construction site, Ivy worked for Jake last summer. He asked her out but she turned him down. Now, months later, Jake is ready to try again. He can't get this girl out of his head and he needs to figure out why. When he asks her out he assumes she'll say no again, so he's shocked when she actually says yes.

After the first date, Jake knows he's in trouble. Ivy is actually someone he could see himself being with, for a lot longer than a night. But what Jake doesn’t know is that Ivy’s only going out with him to prove she’s not the girl for him. She’s dated his type before and doesn’t want to do it again. But is Jake really the player she thinks he is? And if not, is she willing to trust him with her heart?

Author's Note: Give Us a Chance is a standalone and book two of The Wheeler Brothers, a series of standalone novels that each feature a different brother. Next to Me, featuring Jake's older brother, Nash, is book one.

Before she gets in my SUV, I stop her and kiss those beautiful lips again. Then I slide my hand over her smooth silky hair and say, “It’s kind of a rule.”

“You kiss me before you get in the car.”

She smiles. “And why is that a rule?”

“You didn’t do it last night.”

“Yeah. And thank God we didn’t get in an accident. But tonight, I’m not risking it. You need to kiss me before you get in.”

“Every time? That’s too much.”

“It’s for our safety. People drive like maniacs around here.”

“Fine. I’ll go along with it but only because your kisses are…” She glances to the side. “Not completely horrible.”

I laugh. “What the hell? Not completely horrible? That’s how you describe my kisses?”

“What did you want me to say?”

“That the kiss I gave you was the best kiss you’ve ever had. That I kiss like a freakin’ pro. An expert. Someone who could give lessons to all the idiots you’ve kissed before who didn’t know what the hell they were doing.”

“You’re awfully full of yourself, you know that?” Her lips tick up.

“I know when I’m good at something and I’m not afraid to admit it.” I step forward, backing her against my SUV, my eyes on hers. “And I fucking know how to kiss.”

“You really think so?” She leans back but there’s nowhere for her to go.

“I know so.” And with that, I grip the back of her head and bring her mouth to mine and kiss her hard. She grabs my coat and yanks me closer and I thrust my tongue in her mouth. It lashes with hers in a heated frenzy, and then we both slow down, parting just enough to breathe each other’s air, our bodies relaxing. And then I kiss her again, softly, gently, my hand still cradling her head, and we continue on as if we’re not standing in a parking lot in the middle of winter. As if we’re the only two people here, despite the cars driving down the street and the people walking by. We’re completely lost in the moment, lost in each other. It’s surreal, and I don’t understand it because I’ve never experienced anything like this before.

Ivy lets go of my coat and I look at her and see that her face is expressing exactly what I’m feeling. Uncertainty. Doubt. Fear. Because we both know there’s something here. There’s something between us. Something we haven’t felt with anyone else, and never in a million years expected to find with each other. I don’t know what I was expecting with Ivy. Maybe she was just an experiment to see if I could really date a girl without it being about sex. Or maybe I was just determined to convince her to go out with me since she’s only the girl who’s ever said no. But when she finally said yes, I never expected THIS. This overwhelming need to make her mine and never let her go. Where is this coming from? It can’t just be from a kiss, can it?

Goodreads ** Amazon ** iTunes ** Kobo ** Barnes&Noble
About the authors:
Allie Everhart is a hopeless romantic who writes books about love. Allie has authored fifteen novels, including The Jade Series, a college romance that follows the story of Jade and Garret as they deal with numerous obstacles trying to tear them apart. Her other series, The Kensingtons, is a romantic suspense series. Her standalone romance novels include Next to Me, and her latest book, Give Us a Chance.

I like the twists in Give Us A Chance with Ivy being a carpenter and Jake only wanting one night stands but isn't a player. I'm looking forward to reading it.

Thanks for the giveaway! ;)

I'd like to read this book as it says it's a stand alone, which I like with romances :)

Give us a chance...to win that ten bucks.

I like that the author writes for both series' and stand alone books. I wish her much success.

I adore this cover!

I love the cover. So romantic with a lovely couple enoying each other Cant wait to read the book

Cute cover, thank you for the giveaway!

Can't wait to read this one!