Winged Series Box Set
Individual titles available or get them all in one box set. 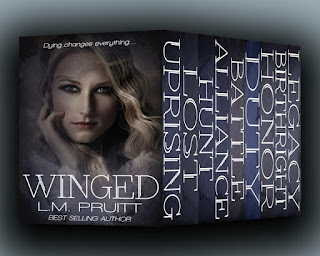 "I really liked this book. I was not sure what to expect at first. It did start of a little slow, Joanne’s life before she died was so boring, which was what we were supposed to see. I would have looked for some way to get some change too." - Goodreads, Michelle about Book #1

"Possibly better than the first in the series if only because the story has gotten so much more action packed. The story absolutely consumed me. [...] There was nothing about Uprising that was predictable and it was completely addictive. It was scary, suspenseful, and fun, everything a good paranormal adventure should be. - Goodreads, Rachel Moore

Winged, Book #1
I fell from the Talmadge Bridge the week before I turned thirty.

I was given a choice: Go to Heaven. Go back to my life in Savannah. Or spend eternity fighting evil under the direction of the archangels.

I chose the demons--and the angels.

I chose the Winged.

Uprising, Book #2
In the last year, Joanne Watson has died, fallen in love, fought demons and earned her Wings.

None of that compares to what's coming next....

And now there's the Resistance.

Joanne must choose again, this time between her fellow Winged and their burning desire for change or the archangels and the eternal vow she made.
Even in the afterlife, one truth remains--everything ends.

Lost, Book #3
In the last year, Joanne Watson has survived repeated attempts on her life, wholesale slaughter, and the dissolution on the cornerstone of her new existence.

And the hard times are only beginning.

As the line between right and wrong, friend and foe, and good and evil continue to blur, Joanne is forced to face another irrefutable fact.

The most dangerous demons to fight are the ones you can't see.

Hunt, Book #4
The last six months have seen more death and destruction than any could have predicted.

And the war is only beginning.

With the fight taking Joanne and her friends from city streets to abandoned farms to the center of the earth, only one thing is certain.

The hunters are now the hunted. 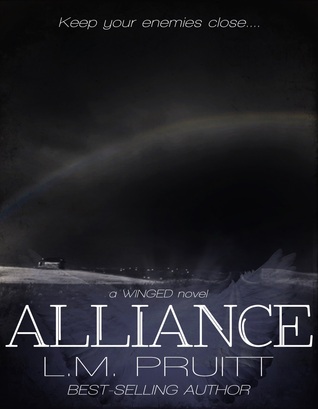 The Fallen have one goal--storm the gates of Heaven and reclaim their heritage.

The Winged have one mission--to prevent it all costs.

From North America to Africa, Europe to South American, the stage is being set for the final battle, the one to end all worlds, and with it comes an ugly truth.

Battle, Book #6
Everything has led to this.

At the very end–what do you fight for?

Duty, Book #7
"I looked and behold, a white horse, and who he sat on it had a bow; and a crown was given to him, and he went out conquering and to conquer."Revelation 6:2

After one hundred odd years of peace, the fate of the world once again hangs in limbo.

The First Horseman of the Apocalypse has been released.

The new generation must rise to the challenge before the millennia old dominos start to fall. And the Second Horseman is released.

Where does obligation end--and duty begin?

Honor, Book #8
"When he broke the second seal, I heard the second living creature saying, "Come." And another, a red horse, went out; and to him who sat on it, it was granted to take peace from the earth and that men would slay one another; and a great sword was given to him."-- Revelation 6:3-4

The first domino has fallen.

Dissent in the military is spreading to the people--old, young, and everyone in between.

As the stakes grow higher, Olivia and her team must fight their own demons in order to stop the Second Horseman.

In war, only one thing is certain--blood will be spilled.

Birthright, Book #9
When he broke the third seal, I heard the third living creature saying, "Come." I looked, and behold, a black horse; and he who sat on it had a pair of scales in his hand. Revelation 6:5

Olivia is gone. Taken by Carestia. I had her in my hand but I couldn't hold on.

Maybe this is my judgment, my punishment, for denying the truth. For denying how much I love her.

So I'll hunt for her. No matter how long it takes, no matter where I have to go. I'll find her. I won't stop until I do.

Legacy, Book #10
I looked, and behold, an ashen horse; and he who sat on it had the name Death; and Hades was following with him.--Revelation 6:7

The number of people who will die unless we find and destroy Mavet once and for all.

Everyone--and everything--is a stake.
Failing isn't an option.
So we won't.

L.M. Pruitt has been reading and writing for as long as she can remember. A native of Florida with a love of New Orleans, she has the uncanny ability to find humor in most things and would probably kill a plastic plant. She knows this because she's killed bamboo. Twice. She is the author of the Winged series, the Plaisir Coupable series, Jude Magdalyn series, the Moon Rising series, and Taken: A Frankie Post Novel.