The crimes of the past echo in the present...- Tear Drop (Detective Elizabeth Ireland #1) by Joanne Clancy

An Irish newspaper receives a chilling letter claiming to be from Campbell, which promises a new reign of terror. As death stalks the dark streets of Cork City, it soon becomes clear to the police and the media that a serial killer is on the loose. 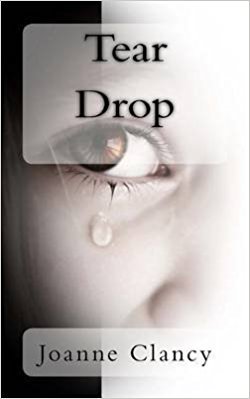 The crimes of the past echo in the present...

Ross Campbell vanished almost a decade ago, and since then nothing has been heard from the serial killer known as Teardrop...until now.

An Irish newspaper receives a chilling letter claiming to be from Campbell, which promises a new reign of terror. As death stalks the dark streets of Cork City, it soon becomes clear to the police and the media that a serial killer is on the loose.

Elizabeth Ireland, a former detective with The Metropolitan Police, was the lead investigator on the original case when Campbell vanished. However, only she believes that Campbell didn’t send the letter.

She embarks upon a frightening psychological journey to uncover the killer's identity, where she's pulled into a lethal game in which the killer sets the rules and waits for her next move. With the crimes of the past echoing in the present, can she find the killer before he comes for her?

The cold rain fell relentlessly, shrouding Cork City in its misty veil. Elizabeth Ireland sat by the window of her favourite coffee shop, where the smell of fresh scones and strong coffee cocooned her from the encroaching winter. The place was quiet and rundown but it was the one place in the city that cherished silence as much as she did.

Elizabeth scanned BBC London's website for any news from home. She glanced up as the door chimed and watched the man violently shake off the rain. A moment before their eyes met, she averted her gaze, knowing he was looking for her; Brendan Mahon didn't have the intelligence or subtlety to feign an accidental meeting. She ignored him, hoping that he'd take the hint and leave her in peace, instead he headed straight for her table.

"Morning," she said curtly. She watched him run his fingers through his dirty blond hair, in a way that someone with a cruel sense of humour must have told him was attractive.

She shrugged and turned back to her iPad.

Brendan Mahon was a journalist with The Examiner, one of Ireland's leading newspapers. When his editor couldn't find anyone with anything more incisive to say, Brendan was handy to fill a column or two. Elizabeth had never liked him, and she had no problem making her feelings known.

"No.'' She sighed at his predictability.

He laughed and pulled up a chair anyway. It amazed her how he always took her blatant rudeness for sarcasm. He placed a brown envelope on the table between them. She didn't give him the satisfaction of looking at it. If he wanted something from her, he’d have to ask.

"I've been coming here most mornings for the past nine years, Brendan. I think I can order for myself."

"What did you have to eat?" he asked, ignoring her brusque tone. He picked up the menu, and she closed her iPad, already missing her lost solitude.

"I haven't seen you in here before," Nora smiled down at him.

"This is Brendan, a reporter from The Examiner.''

Nora's tired eyes lit up. "A reporter? How exciting."

Brendan leaned back in his chair and basked in the unexpected attention.

"He'll have an Americano and a scone, please," Elizabeth interrupted, not in the mood for flirting at that hour of the morning.

"Coming right up." Nora scurried away.

"Let's skip the niceties and get straight to the point, shall we? What can I do for you, Brendan?"

"What sort of help?"

"It must be big news if you're talking to me."

She glanced at the envelope that sat tantalisingly between them, and silently cursed for showing an interest. "Spit it out!" she snapped.

"A letter was delivered to my office."

"Yes, for me; it happens, occasionally. It arrived a few days ago. Only my editor and I know about it. We want to publish it, but first we want to check the facts."

"You'd be our expert. You'd write a few background and follow-up pieces with your impressions and opinions. You'd be paid, of course."

"Of course you'd bloody well pay me. I won't write for your rag for less than twenty grand."

"My editor's a reasonable man. He'll be more than happy to offer you a fair deal."

"Okay," she said, relenting. "I'm interested but why me? I'm sure I wasn't top of your list." She averted her gaze from the sight of him stuffing a scone into his mouth as if it had been days since he'd last eaten, then again, maybe it had been days; he was certainly looking skinnier than usual.

"Someone you used to know sent the letter." Time stood still. She knew what he was about to say. The name chimed in her head before his lips formed the words. "Ross Campbell aka Teardrop." She glanced out the window at the rain and the dark streets, longing to close her eyes and make Brendan disappear. "Did you hear me?" He searched her face that had turned pale beneath her tan.

"I heard you." She gulped her coffee, willing her face to return to normal. She looked at him over her cup, but he didn't seem to realise that anything was wrong. For once, she was grateful for his stupidity.

"Do you remember him?" he asked.

"Of course I remember him. How could I forget?"

Nine years previously, she had arrested Ross Campbell on suspicion of the murder of five women in London. The killer had carved a teardrop on the victims’ faces and left a note with quotes from the Bible on their bodies, shoved inside their underwear or grazing their skin in a final, vicious act of intimacy.

Campbell was picked up in one of London's notorious red light districts. Licence plate checks proved that he'd been in the area on the nights when two victims had disappeared, DNA evidence linked him to their deaths.

Predictably, he protested his innocence, hounding newspapers and some influential acquaintances with his plight, but he was charged with the murders. However, the prosecution's case against him collapsed when Elizabeth was falsely accused of planting DNA evidence to secure a conviction.

When she won her case for defamation against The Met, she decided to retire to Ireland, where she had spent many happy childhood summers. Shortly afterwards, Campbell vanished, and no one had heard from the killer known as Teardrop, until now.

"Ross Campbell is dead," she said, realising that the silence had gone on too long.

"Nobody's seen or heard from him in almost a decade. People like Campbell are noticed, whatever they do; they can't help it. Someone somewhere would have seen him."

"Not according to the letter." He pushed the envelope towards her. “Apparently, he's alive and well."

"Does it explain why he's suddenly reappeared?"

"He wants to set the record straight."

He looked at her indignantly. Elizabeth stifled a smile. She knew all about the book on serial killers that Brendan had recently written, but she wanted to see him squirm. The book was mostly sensation and an insight into Brendan's uninspired mind. "He wants to correct some facts in my book and he wants us to publish his letter."

She burst out laughing. "Are you seriously planning on having a serial killer write a column in your newspaper? Maybe he should take over the problem page. I know: he could be your new resident agony uncle."

"Keep it down," he hissed, glancing over his shoulder at Nora who was busy behind the counter. "We need to keep this quiet for now."

"I suppose it's good publicity for your book." She gazed out the window at the city that was slowly coming to life. The first of the early-morning commuters were venturing out. "What else is in the letter?"

"Does he say when or where?"

"Not really. The letter's vague, but he says it will happen in Cork."

"Have you taken the letter to the police?"

"Not yet. It could be a hoax. Don't look at me like I'm some moron. This is a good story. We'll pass it on to the police when we're ready."

"How do I fit into your little plan?"

"We'd like you to read the letter and tell us if it's genuine. You know Campbell."

"Okay, you knew him. Sorry. You knew him better than most. Read the letter and tell us if it's him, that's all we want to know." He paused, waiting for her reply, but she wasn’t going to make it easy for him. Besides, his use of "we" and "us" was starting to irritate her. Clearly, he was getting too friendly with "the powers that be", as he liked to call them. If it meant so much to him, she'd make him beg.

"Please, Elizabeth. Will you read it?"

"I'll think about it, that's all I'm promising. Call me later."

"It'll be worth your while. This is front-page news. There'll be big money in it for all of us."

"I thought you weren't sure about printing it yet."

"I have to go." She stood up and pulled on her black parka. She was tall and striking. Her dark looks, which she'd inherited from her Italian mother, made her exotic among the mostly pale-skinned, freckled Irish. Her nose was slightly crooked from a childhood accident, and there was an edginess about her, like a bird about to swoop on its prey.

"Don't forget the letter.'' He picked it up reverently. “Promise you won't show it to anyone?"

"Of course I won't show it to anyone." She reached for the envelope in irritation.

"I promise. Give me the bloody envelope."

He handed it to her solemnly, and she grabbed it, stuffing it unceremoniously into her cavernous bag. She tossed her long, black hair over her shoulder and went outside into the rain, leaving Brendan to pay.


She sensed him watching as she forced herself not to run. There were only a few more steps before she turned the corner, out of sight. No one believed that Campbell was dead because only she knew the truth. Campbell had haunted her from the last moment she had seen him. He wasn't coming back. He was dead, and she knew it because she'd killed him herself.

Joanne Clancy is a Kindle All-Star and an Amazon Breakthrough Novel Award quarter-finalist. Joanne is an Irish mystery writer, from Cork, Ireland. She is an avid reader, a self-confessed Kindle addict, and a tea fiend!

Her books combine murder, mystery, and suspense with a twist of psychological drama.

Thank you for hosting TEAR DROP!