Tendrils of raven hair framed a face so exquisite, it disarmed him. Her mouth, a soft, dewy pink, parted. And those eyes, as dark as Creole coffee, intelligent and assessing, roamed over him and then back to take hold of his. He needed to step closer, to stroke her skin. To possess her. But would his wealth and worldly experience be a match for the free-spirited Cajun-born widow? 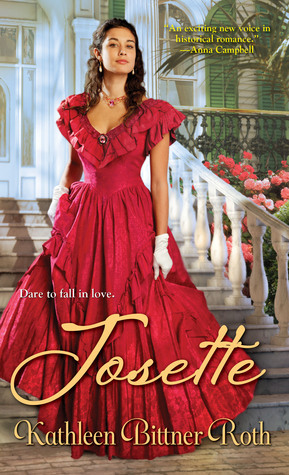 "An exciting new voice in historical romance." --Anna Campbell, award‑winning author of What a Duke Dares

"Monsieur Andrews, welcome to my home."

At the smoky, velvet sound, Cameron swung around. Every function in his body--heart, breath, blood ceased to function.

She was lovely. More than lovely.

Tendrils of raven hair framed a face so exquisite, it disarmed him. Her mouth, a soft, dewy pink, parted. And those eyes, as dark as Creole coffee, intelligent and assessing, roamed over him and then back to take hold of his. He needed to step closer, to stroke her skin. To possess her. But would his wealth and worldly experience be a match for the free-spirited Cajun-born widow?

Across the oceans, between worlds old and new--two lost souls find themselves at a crossroads.

Once he reached China, Cameron Andrews didn’t give a bloody damn where he ended up.
He stood on the dock in front of the Andrews Shipping Company offices, one booted foot perched atop a stubby mooring, eyes fixed on the Serenity. The sleek clipper tacked back and forth, gracefully working her way into the harbor on the first leg of her journey since departing New Orleans. She’d tie down long enough to drop off mail and cargo, then refill her stores and head to the Orient for another load of goods. He’d be aboard her when she set sail.
Born in New Orleans’s Vieux Carré to a French mother, and educated at Cambridge like his English father, he was used to the very best. He and his cousin had inherited the family business, had worked their arses off to turn the shipping line into an empire that maintained the largest fleet in the world. He was a wealthy man who could afford just about anything.
A soft snort escaped him. Anything, that is, except a modicum of peace. No amount of money could buy his way out of the misery that threatened to suffocate him.
Somewhere behind him a church bell pealed the noon hour, and like clockwork, his stomach growled. A glance down the street at the Morgan Hotel, and any desire for food left him. He’d taken his noon meal there every day without fail since his arrival four years ago—that is, until recently. Even though it had been two years since his wife’s passing, facing her parents, the owners of the hotel, was growing more tedious by the day. Lately, he’d been skipping luncheon altogether.
The sun escaped the cover of a billowy cloud and turned the gray waters of San Francisco Bay into a hard sparkle of blue. The air lost a bit of its briskness. He shielded his eyes from the glare and watched the Serenity glide silently through the water. Good Lord, she was magnificent. The fastest ship on the seas. Merde, but it would feel good to gain his sea legs again.
The Felicité and the Celine, two more of the company’s elegant clippers, rode low in the water harbor-side, both laden with goods from China and India. In a few days, one would head to New Orleans, the other to Boston.
As the Serenity tacked eastward one last time before coming into port, Yerba Buena Island appeared behind her like a backdrop, an emerald oasis in the middle of the bay. A familiar hollowness ate at him. His wife and stillborn son lay buried on the western slope of that island. His chest grew taut. Would Dianah forgive him if he left? Lord knew how many times he’d stood beside her grave begging permission to leave without guilt.

Born in Minnesota, Kathleen Bittner Roth has lived all over the U.S.: Idaho, Washington, California, Texas and New York. Currently, she resides in Budapest, Hungary.

Kathleen has won countless awards for her writing, including finaling in RWA's prestigious Golden Heart contest. She is an active member of Romance Writers of America, including the Hearts Through History chapter and has been a contributing editor for an online romance magazine as well as writing and producing successful seminars and meditation CDs.

You can learn more about Kathleen and her books at kathleenbittnerroth.com

Thank you for hosting JOSETTE