Nine outstanding fantasy stories merged together to create a bestselling reaction.
An anthology designed for readers of fantasy . . . Paranormal, urban/contemporary fantasy, science fiction and dystopian fused together in one epic fantasy bundle. Make your way through fire and ice, love, lust and hate as NINE International Bestselling Authors come together to spin their tales of magic and destruction. This is a truly unique bundle that successfully blends all aspects of the Fantasy genre. 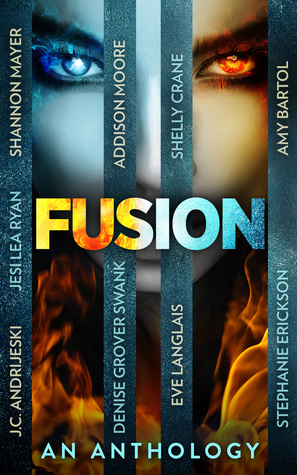 "ELEMENTALLY PRICELESS" an EXCLUSIVE Novella by SHANNON MAYER (International Bestselling Author)
"My name is Rylee, and I am a Tracker."

A missing child, a deadly prophecy, and a world of unusual supernaturals slam together in this EXCLUSIVE novella from Shannon Mayer. Meet Rylee, a Tracker of missing children, and Lark, an Earth Elemental as they tackle a case neither could crack on their own dodging the world of the supernatural and FBI alike. Separate, they are deadly, strong, and determined. Together, they are unstoppable. Or so they think.

Sixteen year-old, Skyla Messenger is a dead girl walking. With her life in upheaval, she finds refuge in Logan Oliver, a boy who shares her unique ability to read minds and has knowledge she desires. If only he would share. Skyla’s bloodlines to angelic beings may not be able to save her from those who want her dead, but Skyla is nowhere near done living --- and she’s not going down without a fight.
Website ** Goodreads ** Facebook ** Twitter ** NewsLetter

"HERE (On the Otherside Series, Book 1)" by DENISE GROVER SWANK (NY Times and USA Today Bestselling Author)
Sixteen year old Julia Phillips buries herself in guilt after killing her best friend in a car accident. But guilt can’t explain howshe can suddenly draw, has false memories of the accident and how a bracelet engraved with her name ended at the scene. Suddenly, Evan Whittaker is interested in her and her life. Why he was missing for two days and returns wearing a pendant she’s been drawing for months leads the two on a journey to find out how Monica is still alive and just where Even is really from.

"INESCAPABLE (The Premonition Series, Book 1)" by AMY BARTOL (International Bestselling Author)
I’m Evie and this was to be the making of me-my first year of college. I’d hoped that once I’d arrived at Crestwood, the nightmare that I’ve been having would go away. It hasn’t. At 17, I may be inexperienced, but I’m sane. When Reed is near, however, nothing makes any sense. He’s not what he seems to be…and neither am I. I’m afraid that the nightmare my dream is foretelling is…inescapable.

"THE CURE” by STEPHANIE ERICKSON (Bestselling Author)
“One life will make the difference.” Macey Holsinger has heard that phrase her whole life, in the name of fighting a disease that has claimed so many lives. How much will she be willing to sacrifice in the name of the cure?
Website ** Goodreads ** Facebook ** Twitter ** NewsLetter

"UPRISING (A Collide Novel, Book 2)" by SHELLY CRANE (NY Times and USA Today Bestselling Author)
Sherry and Merrick come face to face with old friends and new enemies in this sequel to Collide. When a little girl is found, things change for everyone and loyalties will be tested. New romances, drama and rivalries may upset the delicate balance they established while transformations on both sides of good and evil will arise as the series continues.
Website ** Goodreads ** Facebook ** Twitter

"ARCADIA’S GIFT (Arcadia Series, Book 1)" by JESI LEA RYAN (Bestselling Author)
When teenager Arcadia Day wakes in a hospital after what can only be described as a psychic episode, she finds her family in tatters. As her home life crumbles and her emotional control slips away, she begins to suspect that her first psychic experience was just the beginning.

"BIRTH (Allie’s War, Early Years)” by J.C. Andrijeski (Bestselling Author)
High in mountain caves, surrounded by kind-hearted monks, the shadow of the Rooks hangs over Revik’s head, a constant reminder of the dark warrior he used to be. When strange, militant Seers appear, asking for his help, his first impulse is to say no...until he learns it is Kali who needs saving… the one person he cannot refuse.
Website ** Goodreads ** Facebook ** Twitter ** NewsLetter

"WICKEDEST WITCH” by EVE LANGLAIS (New York Times and USA Today Bestselling Author)
Evangeline is not a very nice witch, and she’s not afraid to show it. She lands a job where she is forced to work with a rude, cocky and totally unsuitable shifter. Despite it all, she can’t help craving his touch. When Ryker is partnered with the witch, he does everything he can to fight her allure. And fails. Vampires, a wedding from hell, and a cackling boss make this an action packed and humorous romance to remember.

Yes I have read Amy Bartol, and I love her books and the Angels in them, are amazing I won the first one and bought the rest I was hooked. I love her and am a total fan girl now. this is a amazing prize and would so love it. thank you all so much.