They’ve met the same killer, and he has one hell of a story to tell - Stormfront (Undertow #2) by K.R. Conway 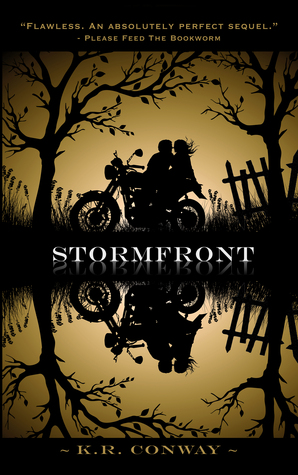 Not long ago Eila Walker’s choices were limited: death by a bullet to the head, or at the hands of her beloved bodyguard, Raef. Now, five weeks after Raef triggered her power and she nearly leveled a historic mansion, Eila is dealing with the fall-out of her decisions. While she doesn’t remember dying in the arms of the soul thief who loves her, she knows that Raef remembers everything about the night he nearly killed her.

Now on the mend and attempting to keep one step ahead of the FBI, Eila and her team of misfits are desperate for a bit of normal. Eila is trying to navigate high school, while her BFF Ana is cautiously hanging with past-boyfriend and soul thief, Kian. Shape-shifter, MJ, is trying not to piss off his mother, while Raef is coping with his fears that Eila will never be safe.

But just as “normal” seems within their grasp, a powerfully built newcomer arrives. Raef knows the scarred man as a Blacklist Dealer – a soul thief, who peddles the names of humans who deserve to die. Eila, however, knows him as the protective hunter from the woods, who she nicknames Thor. Before long, Raef and Eila realize they’ve met the same killer, and he has one hell of a story to tell the five friends . . . if Raef doesn’t murder him first.

Luckless Eila is unknowingly the last of her kind: Rare. Gifted. Breakable. Stunning Raef is her kind's historic enemy: Soulless. Lethal. Lost. A legendary death 160 years before would set their lives to collide, forcing a beautiful killer to become a savior, a simple wallflower to become a warrior, and ruthless destiny to become a death sentence.

SUMMARY:
Seventeen-year-old Eila Walker’s new home has defied the brutal Atlantic for over 160 years. Abandoned since her 4th great grandmother Elizabeth vanished, the town legend declares that she drowned . . . or was struck by lightning.

Unbeknownst to the town and Eila, however, is that someone does know what really happened to Elizabeth, and he has returned, determined to protect the last surviving Walker from a history of violence.

But what starts out as a quest for redemption, evolves into something more and soon young guardian, Raef, is forced to reveal the truth to Eila. As hidden secrets about their warring
families come to light, Eila begins to realize that she may be their best shot at survival, even if it means following in her grandmother’s fearless footsteps to save her killer bodyguard.

About the author:
I have been a journalist for 15 years and serve on the Board of Directors for the Cape Cod Writers Center. I also drive a 16-ton school bus because I am ENTIRELY NUTS.

In addition to working jobs that should come with a warning label , I hold a BA in Psychos (Forensic Psych), torment the tourists about Jaws, and occasionally jump from the Town Neck bridge in an attempt to reclaim my youth.

I live on Cape Cod with two smallish humans who apparently are my kids, my fishing-obsessed husband, two canines (adept at both flatulence and snoring), and a cage-defiant lovebird that sleeps in a miniature tent. Nope - that's not a type-o. The bird is quite the indoor camper.

Ohh this sounds so interesting! Thanks for sharing :)

I would love to read this it sounds awesome. :))

this sounds great, thanks

this sounds great thanks! :)

Thanks for the giveaway<3

great sounding book, thank you for the giveaway

I enjoyed the blurb and look forward to reading the book. Thanks for the chance.

Looking forward to reading this book