He must choose between saving himself and everything he holds dear. - Stalking the Demon (Book 2) by Ciara Ballintyne 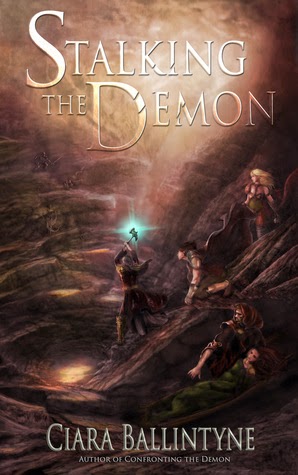 Six months ago, the disgraced wizard, Alloran, sacrificed his hand to rescue the woman he loves from his traitorous friend, Ladanyon. Despite saving the city from a demon, his reputation remains tarnished, and the council of wizards has penalised him severely for the practise of banned magic.

Now he learns his desperate efforts to stop Ladanyon led more to damnation than salvation. Finding a solution compels him to breach his sanctions and venture into forbidden places at risk of his life and freedom.

Alloran must choose between saving himself and everything he holds dear.

For lovers of Jacqueline Carey, Brent Weeks and Storm Constantine - fantasy with mystery, romance and a paranormal twist.

The powerful wizard, Alloran, lurks in the stinking muck of the back alleys of the city of Ehsan. Posing as a common labourer, he struggles to hide from his lover, his best friend, the authorities – and his past.

But beneath the garbage of the backstreets he discovers a new horror: a trail of gruesome bodies, gnawed on by demons, and left gift-wrapped for him to find. Someone is brutally murdering people from his past, and threatening to finish with his lover, Gisayne. What dark secret from Alloran's youth cripples his ability to fight back?

In a world where hellcats stalk the shadows, and a flaming demon lays waste to the citadel of the wizards, Alloran must risk losing himself to a powerful addiction, or abandon Gisayne to hell.

When a lethal spell is stolen from a locked and warded room, Avram must hunt down the thief before the song of power buries a city of innocents beneath a thousand tonnes of ice.

Alloran rushed through the citadel halls heedless of the rich carpets crushed beneath his heavy boots. Gisayne hung limply in his arms, and her black hair trailed over his elbow. A few people watched him pass, but none offered assistance. Over the past six months, Gisayne collapsed often enough to blunt the urgency and the panic. The faces turning in his direction bore only mild curiosity, oblivious to the fact that this time was different.

Her chest barely rose and fell beneath the thin cream silk of her night gown and robe, and blue tinged the edges of her bee-stung lips. Seven hells, was she dying? As he raced onwards, he clutched her against him and her cold skin pressed against his. With no left hand, he had no way to check for a pulse. A choked-back scream of desperate frustration tightened his chest until it squeezed the breath out of his lungs.

While juggling Gisayne, he fumbled with the latch on the door to the citadel’s hospice. Damn his missing hand to the first hell. When the door finally gave, he shouldered it open and backed into a long room lined with starkly made beds. The few occupied by sick or injured had curtains drawn for privacy. Breidmar, dressed in the red-trimmed white robes of a citadel doctor, bustled over at their entrance.

Orange brows pinched with concern over her violet eyes. ‘Again?’

‘She’s…’ The lump in his throat choked him. He swallowed hard. ‘She’s hardly breathing.’

‘This way.’ Pointing to an empty bed, Breidmar called out and strode to a door at the far end. Before she crossed halfway back, an unfamiliar girl in acolyte’s white appeared in the doorway.

Alloran placed Gisayne on the bed with gentle care. Her slack body slid from his arms, her skin pale. When he let her go, her eyelids fluttered but did not open. Nausea knotted his gut. The last time she’d fainted, the recovery was quick. Now, she looked as if death hovered over her, waiting for the moment to snip the thread of her life.

As Breidmar began checking Gisayne’s vitals, she waved Alloran off. He hesitated. What would he do except wait, patient, and idle while Breidmar tried again to determine what illness affected her? She would try and fail, most likely.

‘Are you sure this is not the falling sickness? It’s supposed to get worse with each successive bout.’

‘She’s not got the right symptoms. No seizures,’ Breidmar responded in precise, clipped tones.

Alloran frowned. He wasn’t an idiot. ‘Then what? These collapses are getting more frequent and more severe! Seven hells take you, tell me. Whatever the illness, it can’t be too complicated for me to understand.’

With her severe lips curving down, she sniffed. ‘No amount of genius can assist you to comprehend a malady I cannot explain. While you’ve made any number of miraculous discoveries, you have no particular expertise in medical matters. Leave this to me.’

‘The title of doctor is reserved only for those who have studied in the citadel, and yet you say you don’t know? After all this time, you must have some notion.’ Wisps of his black hair hung about his face, torn free of their bindings in his haste. He pushed them back with a rough motion. When they slid back into disarray, he tore the leather thong free and began tying his hair back with short, sharp motions.

The doctor scowled at him. At her nod, the acolyte whipped the curtain around the bed in a rattle of rings. The cloth brushed Alloran’s nose; he jerked his head away.

A heartfelt sigh escaped his lips before he retreated to a waiting area that comprised a group of chairs. No, sitting still would be intolerable. He changed direction and paced the length of the room, passing the rows of identical empty beds. His boots echoed in the open space. Sterile and odourless air filled his nostrils.

Apparently, Breidmar shared the sentiments of many people in the citadel. Some blamed him solely for the demons that plagued the city of Ehsan six months earlier, and others accused him of working with the renegade wizard, Ladanyon. Although Alloran wasn’t subjected to a disciplinary hearing, the council’s public announcement that they were banning him from all forms of magic involving the hells only reinforced the blame.

Seven hells, the councillors banned him because some of them felt the same as the other citizens. Those residents who lost loved ones in the battle against Ladanyon’s first-circle demon were the most damning. Councillor Valgon’s wife died, and he made no bones about believing Alloran to be a public menace. I just can’t prove it, was what he said.

Sign up for Ciara Ballintyne's Newsletter to receive CONFRONTING THE DEMON for FREE
Goodreads ** Amazon ** Barnes&Noble ** Kobo ** iTunes ** Signed Copy
About the author:

Ciara Ballintyne was born in 1981 in Sydney, Australia, where she lives with her husband, two daughters, one masochistic cat, and one cat with a god complex. She holds degrees in law and accounting, and has been a practising financial services lawyer since 2004. She is both an idealist and a cynic.


She started reading epic fantasy at the age of nine, when she kidnapped Castle of Wizardry by David Eddings from her father. Another two years passed before she began her first attempts at the craft of writing. Confronting the Demon is her debut book.

She enjoys horse-riding, and speculation about taking over the world. If she could choose to be anything it would be a dragon, but instead she shares more in common with Dr. Gregory House of House. M.D.

Thank you for featuring my book

My favorite genre is anything Paranormal and to me, ( because i really don't focus to much on genre) I like anything that is just different from this world, so meaning, wizards, vampires, witch's, shifters, fantasy,paranormal and sci-fi and alot of dystopian's to me all are my favorite,, because like I said i like anything that is different from this world, so genre is not important to me as long as it is a good story line and keeps me going. If i won I would buy books, and what ever else, i love amazon...

I have 2 favorites PNR and SFR but lately I read alot Dystopians. I would buy books with a amazon GC.

I read lots of genres, I would buy a book with the GC