any hope I had died long ago... Stripes (Devil's Boneyard MC #12) by Harley Wylde

18+ "This was a tough, emotional read and it did bring tears to my eyes. But it was everything that I would expect from Melina's story. Harley did a wonderful job at bringing us this emotional, tragic and beautiful story." Dawn, Goodreads 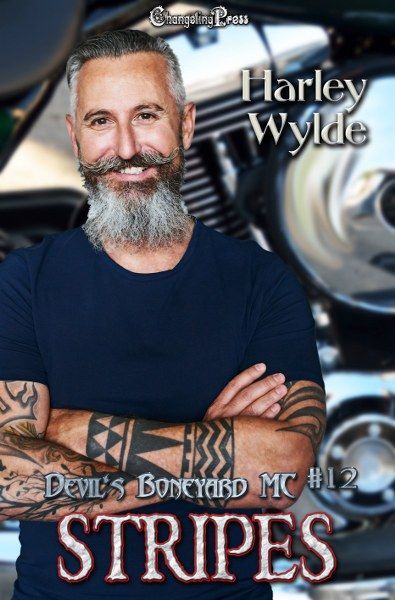 Description:
Published: November 18, 2022
Melina -- Men have never given me a reason to trust them. The Bratva taught me men are brutal. Selfish. And take what they want. Death would be better than tying myself to one ever again. Then a Russian biker swoops in to save me. As much as I want to believe everything he says, how can I? I’ve only known pain at the hands of men. I want him to be different… but any hope I had died long ago.
Stripes -- She thinks she’s broken. I see a survivor. A strong woman who’s still standing despite what’s been done to her. It will take time, but I’ll help her heal. Prove not all men are evil. I’ll give her a reason to keep living. Never again will someone cause her pain. If they do, they’ll answer to me. My hands are already stained with blood. What’s a little more?
WARNING: Recommended for readers 18+ due to language, violence, and adult situations. Stripes is part of the Devil’s Boneyard MC series and contains darker content some readers may find objectionable. Stripes can be read as a stand-alone story, even though it’s part of a series.
EXCERPT

“What intel did Wire send us?” I asked.

Gator shrugged, which meant he’d been as pissed as me and hadn’t paid close attention. We’d parked about a block away and observed the place from a distance. I leaned against a building, smoking a cigarette, in the hopes people wouldn’t be suspicious. So far, we’d seen a few customers go in and come out not too long afterward. I highly doubted they were getting their money’s worth.

“I wish Specter would show the fuck up,” I grumbled.

“We’ll be lucky if he does.” Gator scanned the area. “Can I ask you something?”

He snorted and shook his head. As I figured. I motioned for him to go ahead.

“Why did you agree to this? Breaking the woman out of there, I understand. But letting them marry the two of you? Why the fuck would you take a whore as your wife?”

I fought for control, knowing he was genuinely curious and didn’t mean it the way it sounded. Otherwise, I’d have already put my fist through his face. I took my time, trying to figure out how I could word it.

“The woman in there didn’t agree to become a whore. They beat her. Raped her. Forced her into that way of life. If we don’t get her out, she’ll only suffer more. Grimm and the Dixie Reapers are concerned the Bratva will try to take her back. Marriage is the only way to protect her.”

Gator stared a moment before giving a slight nod. “Fine. As long as they did not coerce you into this shit. I know how big your heart is, Stripes, even if others don’t always realize it.”

I grinned and put out my cigarette. “Let’s get this out of the way. If Specter shows, great. If not, we’ll handle it.”

Breaking into a brothel wasn’t exactly difficult. I’d expected security, but I hadn’t seen a single man watching over the place. If they’d had electronic surveillance, I knew one of the hackers would have disabled it by now. We walked through the front doors and a woman, most likely the madam, smiled at us broadly.

“Gentlemen, what’s your pleasure today? We can cater to any and all of your needs.”

I curled my fingers into a fist, fighting to maintain control. I wanted to rip this place to pieces with my bare hands. Instead, I took in my surroundings. At a quick glance, I saw the frightened women nearby, a few who looked completely destroyed. They no longer cared what happened to them, and the woman in front of me was the deadest of them all. Despite her smile, her eyes were vacant. She was little more than a puppet. I doubted she had any real control. The Bratva owned her, same as the other women here. Her greeting us only meant she’d been here the longest. They’d broken her long ago and had no reason to doubt she’d do exactly as they commanded.

I didn’t think any of these women came here voluntarily. Someone had possibly trafficked them. At the very least, they were being disciplined like Melina. I didn’t want them to get hurt, which meant I needed to be careful. And yet, I’d have to get my point across. The thought of scaring them soured my stomach. But fear and pain would be the only way to get their attention. At first, anyway.

“Do you want easy way or hard way?” I folded my arms. I didn’t need them to know I was a pushover when it came to a damsel in distress. With my accent, they might even think I had Bratva ties. And I knew it was thicker than usual right now. Even I could hear the difference. “I want Melina Romanov.”

The woman slightly flinched. So, she at least knew who I’d come for. The question was whether she’d hand her over, or if I’d have to destroy the place searching for her. I noticed Gator eyeing the women huddled together in the corner. Something told me Gator would prefer it if we took more than Melina with us. However, the Bratva was going to be pissed as fuck if we did, but I knew how he felt. I didn’t want to leave these women here, either. Hell, some of them didn’t look old enough to be legal. But Melina was my priority.

Shit. She’d said they catered to all needs. Did it mean those girls were underage? It made me want to throw up, but I needed to keep my cool at least a little longer.

No one came forward or gave up Melina’s location. Reaching for a vase on a table nearby, I threw it against the wall, watching it shatter all over the floor. The madam flinched again, but still didn’t give in. The others seemed frightened, and I hated being an asshole to them. But there were times it couldn’t be helped.

Next, I picked up the table itself and hurled it against the wall. The plaster cracked, and the table broke before it fell to the ground. Someone nearby whimpered. The madam only pressed her lips together and still refused to speak. This bitch wasn’t going to crack easily. I really didn’t want to fucking hit her.

I took a step forward and raised my hand, bracing myself to deliver a slap I knew I’d feel all the way to my soul. A soft voice stopped me.

“She’s downstairs,” one of the women said. “There are rooms in the basement. That’s where she is.”

About the author:
Harley Wylde is the International Bestselling Author of the Dixie Reapers MC, Devil's Boneyard MC, and Hades Abyss MC series.
When Harley's writing, her motto is the hotter the better -- off the charts sex, commanding men, and the women who can't deny them. If you want men who talk dirty, are sexy as hell, and take what they want, then you've come to the right place. She doesn't shy away from the dangers and nastiness in the world, bringing those realities to the pages of her books, but always gives her characters a happily-ever-after and makes sure the bad guys get what they deserve.
The times Harley isn't writing, she's thinking up naughty things to do to her husband, drinking copious amounts of Starbucks, and reading. She loves to read and devours a book a day, sometimes more. She's also fond of TV shows and movies from the 1980's, as well as paranormal shows from the 1990's to today, even though she'd much rather be reading or writing.
You can find out more about Harley or enter her monthly giveaway on her website. Be sure to join her newsletter while you're there to learn more about discounts, signing events, and other goodies!
Website * Goodreads * Facebook * Twitter * Instagram * TikTok * Bookbub * Amazon
Author's Giveaway
a Rafflecopter giveaway
Posted by CCAM at 10:08 PM