"Do you like Greek Mythology? How about Steampunk? What about a great story with likeable characters and a fresh plot? If you answered 'yes' to any of these questions, then "Gears of Fate" is the book for you. [...] Stanton takes creative liberty with traditional mythology and adds his unique flair. " - Daniel, Volpe 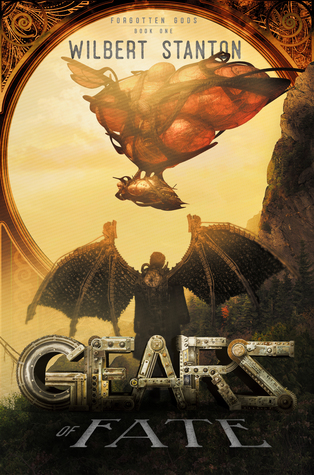 Centuries have passed since the Fey conquered Earth, forcing mankind and gods alike to flee to the sky city Olympus. Forgotten gods walk amongst man, lost and powerless. Little do they suspect a second Fey war looms, and an unlikely duo will set in motion the gears of fate.

Zak Walker is a fringe rat living in the slums who would do anything to protect his sister, Alice. His neglectful father threatens to consign him to a life away from home on an airship, but he yearns for his life to mean something more than drudgery.

Princess Seneca Rose is the last surviving member of the Seelie royals. They tried to establish peace with mankind, but fell to the forces of Queen Mob and the Unseelie Court. Fleeing for her life, Seneca arrives on Olympus in hopes of uniting the forgotten gods against the oncoming Fey.

Zak couldn’t care less about the fate of Olympus, until faeries kidnap Alice. He doesn’t believe Seneca’s stories of faeries or gods, but soon has no choice but to accept their lives are intertwined. All his life, he’s dreamed of something more. If he cannot face the dangers that await down on Earth, the gods, mankind, and his sister Alice are all doomed.


For the first time he could recall, Zeus felt fear.

Goodreads ** Amazon
About the author:
Wilbert Stanton was born and raised in New York City. From an early age, Wilbert decided he would either write books or take over the world; everything else was just a precursor to his end game.

Along the way, he has studied Psychology, English, and Computer Science. He's held jobs in a wide range of fields and met people from all walks of life. Wilbert is constantly learning and growing as a person, in order to solidify his dreams.

In the end, world domination was a bit tedious, so he decided to focus on writing books. Gears of Fate sounds like an exciting read. Thank you