"The Rancher and the City Girl was a sweet, sexy, and sultry romance that had that Western cowboy charm. [...] Joya did a fantastic job balancing romance and real life emotions especially when it came to Tripp and Charlotte. So if you are looking for a sexy and entertaining read that was hot, romantic, and adorable then I highly recommend you to read this book. Trust me Joya Ryan never disappoints as her stories always have heat and heart. " - Michelle, Goodreads 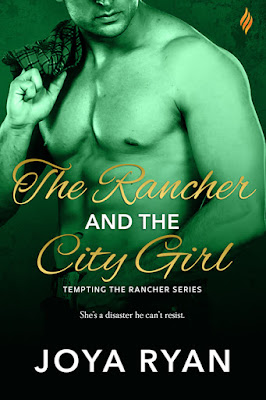 Rancher and single father Reed Montgomery is a master at French braiding and princess tea parties. He’s also the most eligible bachelor in Cheyenne, Wyoming. So when he stumbles upon a flashy, sexy city girl, he knows two things: 1) she’s a walking disaster, and 2) he needs to stay far, far away.

But she needs him more than he wants to admit…

Charlotte Gram knows what it’s like not to be wanted. She’s in Cheyenne for the summer to help her grandmother heal after surgery, but the farmhouse “chores” are proving much harder than she thought. If her day couldn’t get any worse, the sexiest man she’s ever seen strolls up to save the day...

...and he definitely doesn’t seem happy about it.


"I loved the storyline. This one had me at single father. Add in cowboy and it was like icing on the cake. There's enough details to keep things moving along at a brisk pace but I never felt it was rushed, just enough to keep everything moving along perfectly. Love the sparks flying. It was entertaining and sexy, and there was a nice bit of emotion and playfulness too. It made for an excellent afternoon read!" - Gretchen, Goodreads

“You are the worst car in this hellhole town and I swear—to—God…” Charlotte Gram kicked the driver-side tire of her rental car with her favorite stiletto. The dry summer air blew hot against her skin, and a small film of dust settled on her neck.
Gross.
Was dust a thing out here?

She was used to the Los Angeles smog and clutters of asshole people. She’d never thought she’d step foot in Wyoming. Ever. But this was the prairie state her grandmother had chosen to retire in, so that’s where Charlotte needed to be.

Wilma Gram had moved to Cheyenne five years ago when she’d inherited her family farm. Something about a great-uncle who had died and left it to her. Apparently Grammy took really well to the country life, because even at seventy-plus years old, she was thriving. Up until this summer, at least. She’d needed ankle surgery that would leave her in a cast.

With Charlotte the only one left who stayed in touch with Grammy, it was up to her to see the older woman through her recovery. Which meant several weeks of summer in this tiny town, working remotely from the house, and attempting to help Grammy run the farm and all the chores that went with it.

She could continue building websites, earn a living, and get back to her life in L.A. in no time. Besides, it wasn’t like her grandma had a massive farm operation…she didn’t think. Charlotte hadn’t gotten out to visit the great state of Wyoming since Grammy had settled in. Between building her career and surviving a string of bad relationships, Charlotte was happy just keeping her head above water and being the forever bachelorette.

Every time she got past date number three, she started to feel like the man she was with never wanted her in the first place. And it wasn’t just romantic relationships, either. Charlotte never seemed to fit anywhere or in anyone’s ideals. She wasn’t successful enough—yet—to be “accomplished,” and wasn’t creative enough to be “small-business hipster woman.” She was also too blunt to be ladylike, and too prudish to be a vixen. It wasn’t like she could help it. Her mother had done a shit job raising her, and her father bailed when she was young. She sure as hell hadn’t been able to count on anyone.

Basically, she’d spent her life in a constant state of unclassified and unwanted.

Commitment wasn’t something she was interested in chasing. Ever. Doing so would mean trusting someone to want her completely, preferably long term, which wasn’t likely. No, better to stick to her rules of no strings, no commitment, no family. Grammy was the only exception. No way would she have her own kids, no matter how many busybody women in Spin class told her that her eggs would dry up soon. She was only thirty, for Christ’s sake.

So yeah. She worked alone, lived alone…
…and would probably die alone.
It was kind of depressing, actually.

Charlotte blew a lock of dark hair out of her face and glanced around. The town was cute, at least. Downtown Cheyenne was basically sandwiched between an old-looking bank made of all brick and an antiques shop. There weren’t many people milling about, let alone the floods of people she was used to.

She shuddered. “I bet this place doesn’t even have triple-A,” she said, eyeing her newest enemy, the rental car she knew nothing about that was making a pained, gasping sound. A soft rise of smoke billowed out from under the hood. Charlotte frowned. Day one and she couldn’t even get through this hillbilly town.

She kicked it again, letting another round of curses fly. She just needed this piece of crap rental to get to her grandma’s. It couldn’t be too much farther, could it? “Piece of shhii—”

“Excuse me, ma’am?” a husky voice rumbled behind her.

Charlotte stalled midkick and looked up to see a very tall, very strong, very cowboy man staring at her.

“It—shit—I mean, yes?” Her skin went hot, even though Mr. Cowboy was shadowing her in his capable frame. Could she possibly sound more like an idiot who didn’t know how to speak?

“I wonder if I could assist you?” he asked, pinching the tip of his Stetson and keeping those crystal blue eyes locked on her.

Mr. Cowboy was wearing a crisp white T-shirt that clung to chiseled abs and a broad, solid chest. The bits of dirty blond hair sticking out from under his hat matched the several-day-old stubble on his face.

She didn’t know if it was the jet lag or the altitude that made it difficult to swallow.

She looked down, her gaze devouring him like a life-size Snickers bar, repeating the mantra in her head when she hit his narrow hips…

She snapped out of her ogling and grimaced when she realized her own mind and body had betrayed her. Sure, it had been a while since she’d had sex last, but she needed to get a grip. Wasn’t like she’d never seen a cowboy before. Because she had…in the movies.

“I apologize,” she said, harnessing all her assertive grace. “I’m a hot mess because of this car and I’m—”
“A city girl,” he finished for her with a smile, then effortlessly rounded the car and popped open the hood.
“You say ‘city girl’ like it’s a bad thing,” she responded.
That smile stayed on his face as he shook his head and looked over the engine.

“Not a bad thing. Cities can be fun. Lots of flash.” He glanced her way, only his eyes started at her feet and slowly slid up her legs. Her skirt felt tight against her thighs, her button-up top suddenly constricting. Or maybe Mr. Cowboy’s eyes were making her flush.

“Nothing flashy around here, it seems,” she said, breaking his gaze on her.
“That’s not true. This place puts on a hell of a rodeo show every summer.”

She laughed.
He blinked.
Oh, he was serious?

“That sounds like…something,” she said, trying to polite, but the way Mr. Cowboy bent over the engine and messed with God-knew-what under the hood made his tan arms flex and that shirt of his pull tight over his shoulders. Well-defined shoulders. Shoulders that could handle fingernail scratches…

She shook her head again and reasoned that she was hungry and just needed an actual Snickers bar. That was it.

“Looks like you’re overheating,” he said, and stood to face her.
Her eyes shot wide and she smoothed her hands down her skirt. “I’m perfectly fine,” she defended.

He chuckled. “Nah, I mean your car. You’re low on coolant. I have some in my truck.” With that, he walked about fifty feet up the street to a massive truck and grabbed something out of the back. She thought she’d appreciated the front view of him? The back was even better. And those jeans? She didn’t know who designed Wranglers, but she was going to write that genius a letter because damn, they showcased Mr. Cowboy’s ass to perfection.

Maybe she could enjoy the sights of Wyoming just a little. She was set to be farm-locked for the summer. Maybe she had time to take advantage of the town before all the work and caretaking started?

Cowboy walked back to her with a jug of what she assumed was coolant in his hand and went back under the hood.

“Tough way for a lady to meet Cheyenne,” Cowboy said, focusing on the pouring he was doing.

“I must admit, this first experience could skew my judgment of Cheyenne from here on out.”
“Aw well, I hope you can leave with only a positive view of things,” he said, standing and brushing off his hands.

Positive view, indeed.
“Start her up and see if that helped,” he instructed.

She got in the car, and with the driver-side door open, he stood at the hood and she yelled, “Okay, going to start it up now…”

“You’re amazing,” she let slip out before she could think better of it. When she got out, she caught him smiling.

“No, ma’am,” he said quickly, and her internal balloon deflated. But he leaned against the car and grinned. “I’d love to buy you a drink and show you a kinder side of Cheyenne. No repayment necessary.”

Her entire chest lit up with happy sparks, and she tried not to dance like a tween goof at the thought of a date with Cowboy. Apparently she had a thing for country boys, because she hadn’t been this attracted to a guy in a long time.

He smiled and tilted his chin toward the bar on the corner, just a block down from where they stood. “The Cadillac Bar right there has live music tonight. You free around eight?”

“I’ll meet you there,” she said.
He pinched the brim of his hat again. “Pleasure meeting you…?”
“Charlotte,” she said.
“Tripp.”

Of course his name was Tripp. A man like him would never be a Blain or an Andrew. No, he was Tripp. Rustic, a little dirty, and all kinds of perfectly wrong for her. But perfectly right for a minimalist situation. She didn’t have to worry about long term or her heart with this man; she had to worry about her panties.

She had a sneaking suspicion they wouldn’t survive.

About the author:
National and International Bestselling Author. Break Me Slowly: #1 Bestselling book in Contemporary Fiction and Women's Fiction!

Author's Giveaway
a Rafflecopter giveaway
Posted by CCAM at 2:50 PM