“Titchenell and Carter hold nothing back in this solid sequel that thrills and expands on its predecessor. Aided by swift writing, relatable characters and unexpected scares, Shards is a chill-inducing delight.” —David Powers King, co-author of Woven. 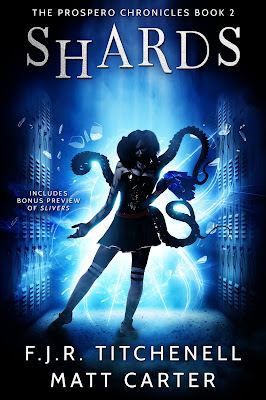 When autumn descends on Prospero, California, Ben hopes the normality of the new school year may offer a reprieve from the town’s paranormal horrors. Mina knows all too well that there are no reprieves and no normality to be had in Prospero, but even she can’t prepare for what the coming year holds.

On top of the vivid hallucinations that have plagued Mina since the attack on the Warehouse, and the brewing Splinter civil war that threatens all of humanity, inside the walls of Prospero High, Ben, Mina, and their expanding Network face a vicious campaign to destroy their friendship, and a mysterious assassin picking off human rebels – an assassin with powers like no Splinter they’ve fought before.

Ben and Mina’s one hope rests with a mysterious old man hiding in the woods outside of town; a living legend who may be able to teach them how to fight this dangerous new breed of Splinter. That is, assuming he doesn’t kill the pair of them himself.

“Maintaining the same level of popcorn-munching fun, Titchenell and Carter are taking The Prospero Chronicles in a promising direction.” —Joe Dell'Erb, Washington Independent Review of Books.

Marian Kelly died in a one-car accident near her home in Turtle Lake, Montana, on August twentieth, at the age of forty-two.
Marian is predeceased by her parents, Rand and Millicent “Millie” Kelly, and her brother, Christopher.
Marian was born in Prospero, California, and studied Psychology at the University of California, San Francisco. She held black belts in multiple martial arts and was an accomplished member of the Turtle Lake Hunting Club.


Or that’s what I told myself, for the thirty-seventh time, when I recognized Ben’s knock on the front door above.

About the authors:
F.J.R. TITCHENELL is an author of young adult, sci-fi, and horror fiction, including Confessions of the Very First Zombie Slayer (That I Know of). She graduated from Cal State University Los Angeles with a B. A. in English in 2009 at the age of twenty. She currently lives in San Gabriel, California, with her husband, coauthor, and amazing partner in all things, Matt Carter, and their pet king snake, Mica.

MATT CARTER is an author of horror, sci-fi, and yes, even a little bit of young adult fiction. He earned his degree in history from Cal State University Los Angeles, and lives in the usually sunny town of San Gabriel, California, with his wife, best friend, and awesome co-writer, F.J.R. Titchenell. Check out his first solo novel, Almost Infamous, or connect with him on: