Cecilia Murray has been wishing for a dog for as long as she can remember. But when a cute little pug is brought in to Orphan Paws, the shelter where she volunteers, she knows Potato is the dog she’s been waiting for.

Cecilia Murray has been wishing for a dog for as long as she can remember. But when a cute little pug is brought in to Orphan Paws, the shelter where she volunteers, she knows Potato is the dog she’s been waiting for.

There’s just one problem—Eric Chung (class president, captain of the basketball team, and all around Mr. Perfect) has already adopted Potato. And what’s worse, he plans to turn her precious little tater into a show dog. Cecilia vows to rescue the little guy from a life of sparkly collars and snobby judges. First, she has to “help” Eric train Potato. The trouble is, the more time she spends with Eric, the harder it is to remember her mission. For Cecilia, it’s puppy love for sure…but maybe Potato’s not the only one who’s stolen her heart.

"We need more books like this flooding the book market! [...]
Dynamic writing with imagery that brings the reader into Cecilia's world, it's a must read for tweens and teens (and maybe some adults too). Reader beware: you're going to want to adopt a puppy after reading. :)" - Goodreass, Nikki Morell 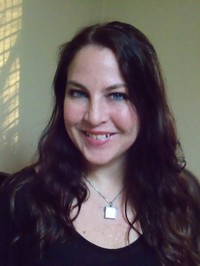 If you’re looking for J. J. Howard, you’ll probably find her in Central Florida, but she wishes you’d find her in New York City. NYC, along with books, TV, music, coffee, and her mini-dachshund Willow are on top of her list of favorite things.

By day she teaches English and Humanities at a small private high school, and by night she writes, edits, or Netflixes.

Howard’s debut YA, That Time I Joined the Circus, tells the story of Lexi, who accidentally joins the circus (and falls in love) while searching for her missing mother. Her second YA, Tracers, follows Cam, a NYC bike messenger who meets a beautiful stranger named Nikki who pulls him into the world of parkour. Her debut MG, Sit, Stay, Love is coming from Scholastic onJanuary 26, 2016. I think my twin daughters would love to read this. They are animal lovers anyway and this would be perfect for them to read. They are 12, almost 13

I love the cover! My good friend has pug dogs and I always get her pug related gifts :) She would love the book and so would I :)

Both the book and the cover seem to be really cute. The pug is adorable.

I think the cover is adorable. It will definitely stand out on a shelf.

I love the cover. My youngest son has a pug, they have such a great personality.