freedom is a tease - The Glass Ceiling by Julie LaVoie

Pickaxes, grime, and watery oatmeal are all sixteen-year-old Heart has ever known. Growing up in the tunnels, the only breaks in her muscle-aching monotony are the numerous nights spent cramped in a metal box. Stupid runaway mouth. But when strange visions and a hidden map hint there’s more to life than she’s been led to believe — boys being one of them — only one thing weighs on her mind. Escape.

Pickaxes, grime, and watery oatmeal are all sixteen-year-old Heart has ever known. Growing up in the tunnels, the only breaks in her muscle-aching monotony are the numerous nights spent cramped in a metal box. Stupid runaway mouth. But when strange visions and a hidden map hint there’s more to life than she’s been led to believe — boys being one of them — only one thing weighs on her mind. Escape.

Yet freedom is a tease. Heart merely trades her small prison for a larger one — a transparent dome controlled by the Guardian, an aging leader bent on creating a genetically perfect race. Heart's birthmark on her shoulder? An abomination that carries a lifetime sentence of slavery for females.

Refusing to let a glass ceiling deter her, Heart searches for a way out of the dome. But unraveling the Guardian's secrets is a risky endeavor. Human skulls atop crude sticks serve as a warning: treason is punishable by death. When her new friends are captured, and escape is just an arm’s reach away, Heart must decide. Take the freedom she so desperately wants or save her friends’ lives?


Just as Heart touched the doorknob, muffled voices sounded from the other side. Crap. She looked around her. The closest object was a trash can. She lowered herself behind it, wrinkling her nose at the putrid smell of dirty diapers. The door swung open and the Matriarch stepped out. A messy braid laid over one shoulder.
“We need to locate her. Check the bathroom. Check the tunnels. She couldn’t have gotten far.”

The woman stomped past the trash can without noticing Heart. In one bright flash, all the fluorescents came on. Chills spread through Heart like black oil. They were going to find her.

The dorm mother put one of the older girls in charge and rushed toward the east tunnels. Heart stayed in her kneeling position, frozen to her spot. Think, Heart, think. Going inside her dorm was out of the question. Her only choice was to go west. Her heart sank. The west tunnels were in the opposite direction of the Box. She couldn’t leave 176 behind.

Before she could change her mind, she abandoned her hiding spot and sprinted toward the common area. Luckily, everyone was already in the tunnels and she made it through without being detected.

She neared the Box and moaned. She’d forgotten about the padlock. How was she going to get 176 out? She banged her fist against the thick metal. “176, you in there?”

There was no response. Of course, 176 couldn’t talk. She placed her ear against the door, listening for movement. Three thumps came from within.

“The door is locked and I can’t open it.” Heart banged once more. “I have to go, but I’ll come back for you, okay?” She hesitated. Promises alone wouldn’t help 176 survive the Box. “Just concentrate on the sliver of light. Pretend it’s an angel, wrapping you with her wings. Protecting you. That’s what I do.”

A ball formed in Heart’s throat. “Stay strong. I know you can do it.”

A thump sounded. Heart sniffled and wiped at her nose. There was nothing more she could say.

With a final glance over her shoulder, she rushed toward the west tunnels, staying close to the walls. She made a note of the small alcoves she passed. If needed, she could easily squeeze into one.

Every couple of minutes, she stopped and listened for voices. Yells and the beating of feet into dirt bounced off the cavern walls. She couldn’t tell if they were ten feet away or a hundred. Adrenaline forced Heart forward and she quickened her pace. If the Matriarch caught her, losing her tongue would be the best scenario she could hope for.

The walls grew narrower and the path more treacherous. She’d never been this far into the tunnels. Looming rock formations snagged at her hair. What if she’d picked the wrong turn? What if it was a dead end?

She turned a corner and her stomach flipped. A wrought iron gate marked the exit, a six inch thick steel bar holding it in place. Beyond the gate, a pinkish purple glow filled the tunnel. Freedom? Heart grasped the cold metal bar. C’mon, c’mon, c’mon! She tugged until her veins threatened to pop out of her forehead.

It didn’t budge. She whipped her head back and forth, searching for something hard. She grabbed a rock and slammed it into the bar. A pinging sound echoed off the walls. She didn’t care that the commotion would attract attention. There was no other escape. No bright arrows pointing the way. Nothing left to do but hit that bar with every bit of strength she could muster.

The footfalls came quicker now. A whistle blew. Heart hit the bar faster. Harder. The sounds were closing in. Every hair on her head could sense her pursuers. And yet she continued. Bang. Bang. Bang.

The bar moved slightly and tears of hope stung her eyes. Please!

Her body jolted as someone grasped her arm. The rock, and her only chance of escape, slipped from her fingertips. 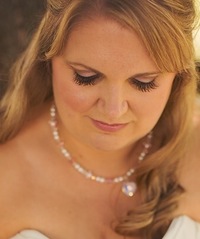 Julie lives in historic Saratoga Springs, NY with the man of her dreams and their boys. Being surrounded by males, she overcompensates by owning everything pink. From her clothing, to purses, to even her pots and pans. She just can’t get enough pink.

She enjoys taking long road trips with her family to the beach and to amusement parks. She has one cat that she showers with kissy-baby talk, but who only returns a non-amused glance every once in a while. It’s her third cat to act this way, so she’s wondering if perhaps she should get a dog next time.

From a young age, Julie’s vivid imagination constantly invented story lines. But it wasn’t until she began working in a career that required zero creativity, that her need to write poured out like a dam bursting. And she’s been writing ever since.

Sounds great ! Thanks for the giveaway :)

This book sounds awesome! Anxious to know if she escapes.

Great excerpt. Really makes me want to read this book to find out what happens and who grabbed her arm!! :)

Gorgeous cover! Thank you for the chance at the giveaway! :)

Sounds good!!! excited to read this :)


The book sounds interesting. I like the idea of the characters breaking out of slavery and living in tunnels.

Loved the excerpt, thanks.

I'm looking forward to reading this. It sounds great.

I love how the author overcompensates the testosterone in her household by having pink pots and pans. I would love to have pink pans.

It reminds me to anime Gurren Lagann , big fan of it and apparently many others are too, so I think this book will sell great.

I enjoyed reading the excerpt. Thanks.

I love reading a little bit about the author. And I giggled as I read she is surrounded by manlings. I am too and tho I lobe them all they drive me crazy. Thanks for sharing with us about the author Always interesting