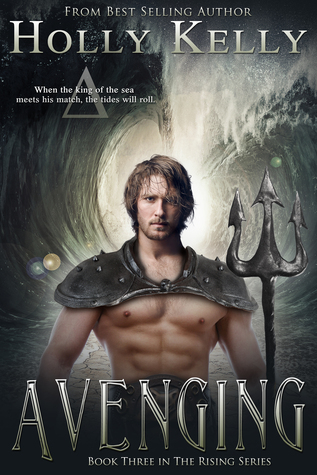 Two thousand years ago, King Triton witnessed the slaughter and total annihilation of his merchildren. He vowed then and there to never again father a child. Powerful and eternally youthful, Triton was no stranger to seduction. But his resolve was unwavering—until he met Nicole. Unable to resist the human woman, he found himself swept up in her arms. When he finally came to his senses, he abandoned her to return to his refuge in the sea.

Twenty years later, he comes face to face with his daughter. Triton is both thrilled and frightened to learn he’s a father. Meeting the child he never knew fills a void in his life. But at the same time, he once again finds his heart at risk. Even more terrifying, he’s forced to admit he’s still in love with Nicole. Gathering his courage, he leaves the sea to seek her out. But the pain he caused is not easily forgotten. And mending broken hearts should be the least of his worries. The elements are in commotion, threatening the utter destruction of mankind. And much to the sea god’s surprise, the human woman he loves may be the key to saving them all.

“What about Nicole? I trust that you’re treating a woman better than you’re treating me. She’d better be well cared for.”
“And if she isn’t?” Hector raised an eyebrow and smirked.
Triton narrowed his eyes. “Then I will grant each of you immortality.”
Confusion flashed across Hector’s face, and he barked out a laugh, “Why would you do that? Immortality is a gift, not a curse.”
“For the Pelagi, it would be a curse. For after I grant you immortality, I will chain each of you to the walls of this dungeon and leave you to suffer for all eternity. I’d imagine after the first week, your stomach will scream for food and your lips will crack and bleed from lack of moisture. You can’t imagine the desperation you’ll feel to have even a drop of water touch your tongue.
“But that’s not the worst of it. I’ve seen a few rats around here. Do you know what will happen to you when the rats realize you are helpless to defend against them?”
Hector frowned.
“They’ll begin to eat you. They’ll start with your toes, stripping them down to the bones. Then they will climb up your body, biting away chunks of flesh along the way. I imagine the thing they will enjoy most will be your moist, juicy eyes: eating away at them until they are nothing but empty, bloody sockets. You will feel each bite slice through your skin, each tug as they pull at the muscle and wrench the tendons away from your bones. Your suffering will be tremendous, but you will be helpless to stop them. And then, once they’ve had their fill, the rats may leave for a time. As an immortal, your flesh will re-grow. The pain of your open wounds will fade; you will be whole once more—until the rats come to feed again.
“And again. And again.”
Hector’s face drained of color. Horror reflected in his eyes.
“Think on this as you decide how to treat the woman I love.”

GoodReads ** Amazon ** Barnes&Noble
About the author:

Holly Kelly is a mom who writes books in her spare time: translation–She hides in the bathroom with her laptop and locks the door while the kids destroy the house and smear peanut butter on the walls.

Holly was born in Utah but lived in Salina, Kansas until she was 13 and in Garland, Texas until she was 18. She’s now back in Utah–“happy valley”. Holly is married to her wonderful husband, James, and the two of them are currently raising 6 rambunctious children. Her interests are reading, writing (or course), martial arts, visual arts, and spending time with family.