duty and obligation pulls him away... again - Matter of Time (Heat Wave #5) by Alannah Lynne

18+ In MATTER OF TIME, Lizbeth has spent the past fifteen years desperately searching for someone to fill the void left by Logan Steele’s disappearance from her life. However, rather than finding love and happiness, all she’s found is disappointment, heartache, and an ever-present longing for the man she can never have.

Some might think the phrase, “you complete me” is a just cheesy line from the movies, but Lizbeth Sanders knows better…

In MATTER OF TIME, Lizbeth has spent the past fifteen years desperately searching for someone to fill the void left by Logan Steele’s disappearance from her life. However, rather than finding love and happiness, all she’s found is disappointment, heartache, and an ever-present longing for the man she can never have.

Fifteen years ago, Logan Steele left the woman he loved to marry his high school sweetheart and be a father to the child he didn’t know he had. He’s always tried to do the honorable thing, to be a good husband and a great father, but despite his sacrifices and best efforts, the shaky foundation of his marriage crumbles and falls apart.

When his identical twin surprises him with a reintroduction to Lizbeth, Logan feels like he’s been given a second chance—at life and love. But a lot can change in fifteen years, and after hurting her so badly the first time, building trust isn’t just hard, it’s nearly impossible—especially when duty and obligation pulls him away again.
EXCERPT

She couldn’t logically think through something that was ninety-nine percent emotional, but what if she took the emotion out of it? What if she reduced them to a baser, primal level, like animals circling each other in the wild?

A dog in heat didn’t study the neighbor’s Doberman and wonder if he would be around the next day. The bitch rolled over, allowed him to take what he wanted, and enjoyed the hell out of it. Comparing her and Logan to dogs seemed ridiculous, but that was the only way she knew to cope with the overwhelming magnitude of the situation.

Swallowing the lump in her throat, she slowly, tentatively reached out to him. With a barely-there touch, she pressed her index finger to the edge of his forehead, drew it across the unfamiliar scar at his temple, then down to the one intersecting his upper lip. He closed his eyes and moaned as a shudder shook his torso and his head fell back on his neck.

Seeing him respond to her touch as strongly as ever gave her the courage to continue her exploration. Using a whisper-soft touch designed to drive him crazy, she traced the outline of his upper lip, then pulled a long, slow sweep along the bottom one.

Her breath caught in her throat and she gasped in surprise as his lips parted and his teeth latched onto her finger, capturing her in the velvety heat of his mouth. His tongue wrapped around her and he sucked once… twice… a third time. The force of the suction shot through her arm, into her chest, and dropped into her sex with the heat and intensity of an atomic bomb.

Good, so freaking good, just as always with him. Simple caresses and touches were more powerful and intimate than full-on sex with anyone else, and she closed her eyes and allowed the carnal energy swirling between them to carry her away.

As the room spun and she grew lightheaded, like being caught in a massive vortex, a terrifying thought jumped into her brain. What if the past fifteen years hadn’t been a nightmare, but this was nothing more than a dream?

If so, it was the best, most realistic dream she’d ever experienced, and she prayed she never woke up.

She cracked her eyes open and watched his nostrils flare as the heat continued to build between them. She needed to be closer. To taste him. To feel him pressed against her. Scooting to the edge of her seat, she pressed her knees between his legs and smiled as his eyes flashed hotter and his chest rose and fell rapidly. His mouth was masterful, and while the suction on her finger did crazy things to her entire body, it wasn’t enough.

When she tugged on her hand, drawing him closer while also indicating she wanted him to let her go, he released her finger with a loud pop. The sound was like a starting gun, and in the next instant, his lips crashed down on hers, hot, hard, and demanding. Logan had always been sexually dominant, but this… this was unlike anything she remembered.

One hand slid through the hair at her temple, then wrapped around the back of her head and held her in place while he angled his head and deepened the kiss. His tongue thrust in and out of her mouth, harsh and nearly punishing, and when he nipped on her bottom lip, both of them groaned with the pleasurable familiarity.

The past fifteen years melted away, and she was a twenty-year-old girl again, standing in his bedroom, getting ready to crawl into his bed for the first time. They’d kept their relationship platonic for a year, respecting the boundary constraining them because of his off-and-on relationship with Bobbi Jo. But the night he came back to school and told Lizbeth he and Bobbi Jo had broken things off for good, it took less than thirty minutes to ditch their friends at the restaurant and make their way back to his condo.

His hands tangled in her hair and held her head in place as he ravished her mouth. She clawed at his shirt, trying to get to the hard muscle and soft skin beneath. She couldn’t get close enough, fast enough, and desperation had her whimpering into his mouth.

When he drew back to grab a breath, she latched onto him to keep him close. “More. I need more.” 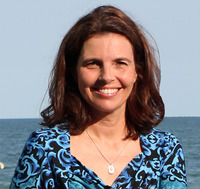 Alannah believes there's nothing more magical than finding the other half of your soul, experiencing fiery passion, and knowing you've found happily-ever-after.

She loves going to work each day (in sweats and a T-shirt) and writing about hot heroes and feisty heroines who torment each other in the most delicious ways before finding their happy ending.

She lives in the coastal region of North Carolina with her husband, who also happens to be her best friend and biggest fan. They have two sons, a dog, and two cats.